The title of this article is ambiguous. Further meanings are listed under Bellinzona (disambiguation) .

The Federal Criminal Court has its seat in Bellinzona .

Bellinzona is located in the valley east of the Ticino River at the foot of the Gotthard massif near the border between Sopraceneri (northern Ticino) and Sottoceneri (southern Ticino). Rocks that were formed in the last Ice Age protrude from the plain, which is directly connected to the Magadino plain ; they mainly consist of gneiss . The castle rock was the main reason for the construction of a fortress at this point.

The place was of great strategic importance as the key to the St. Gotthard , Lukmanier and San Bernardino passes . Archaeologists suggest that the city has been inhabited for 4,000 years. It is believed that the Neolithic settlements were located on the slope where the Castelgrande stands today. This place was easy to defend and secured against the floods of the Ticino. The place belonged to the Roman Empire since the 1st century BC . This expanded the fortress on the slope. In the fifth century the Lombards came to the city from the south and built a first, larger fortification on the slope of what is now Castelgrande. In 590 the city was attacked by the Franks and was first mentioned in writing on this occasion. In the 11th and 12th centuries the presumed wooden palisades were replaced by stone walls.

Giovanni Visconti and Luchino Visconti besieged the city for two months in 1340 and finally conquered it; even then it was an important trading place thanks to the Gotthard Pass. The Swiss Confederation was founded in 1291 and became increasingly powerful. The dukes of Milan did not want to lose the city and therefore heavily armored it. The three castles, from west to east, the Castelgrande , Castello di Montebello and Castello di Sasso Corbaro were built as a line of defense against the north . In 1499, Louis XII. of France with his troops and Bellinzona took possession of it. The residents secretly sold the city to the Confederates . In the Eternal Peace of 1516, France gave the city to the Swiss. Nevertheless, France tried again and again to buy them back, which the Confederates refused. In 1803, with the founding of the Canton of Ticino , the three well-fortified castles around Bellinzona passed into the ownership of the canton.

After Bellinzona, Locarno and Lugano had alternately been capital cities in the new canton , Bellinzona became the definitive seat of the cantonal government and parliament in 1878 .

In 1907 the previously independent communities Carasso , Daro and Ravecchia were incorporated into Bellinzona. On April 2, 2017, the neighboring communities Camorino , Claro , Giubiasco , Gnosca , Gorduno , Gudo , Moleno , Monte Carasso , Pianezzo , Preonzo , Sant'Antonio and Sementina followed . The area of ​​the political municipality increased in 2017 from 19.1 to 164.96 km², and the population increased from almost 19,000 to over 42,000.

After Faido , Lugano and Airolo , Bellinzona was the fourth place in Ticino with a power supply. The power plant in the Valle di Gorduno went into operation on February 1, 1891 and mainly supplied electricity for public lighting. The idea of ​​gas lighting was abandoned. The existing power plant with an output of 400 hp was not enough for more soon to cover the additional energy requirements of individuals and industry, including the 1891 opened maintenance workshop Officina Bellinzona of the Gotthard railway . After evaluating several projects, the city decided in 1898 to build the Morobbia power station , which went into operation in 1903. The plant was expanded several times and in 1947 had an output of 7,000 hp (5.2 MW). At the beginning of the 1970s, the system was expanded and provided with a weekly storage tank in the shape of Lago di Carmena . In 2018 the power plant had an output of 15 MW and was thus able to cover a fifth of the city's electricity needs.

The legislature is the Consiglio Comunale ( local council ) with 60 members.

The municipality forms the executive branch , consisting of seven members and two substitute members. Since 2017 it has been composed as follows: 3 FDP, 2 United Left, 1 CVP and 1 Lega. Sindaco (Mayor) is Mario Branda ( SP ).

Bellinzona from the ISS, 2017. Motorway 2 runs through Bellinzona largely parallel to the Ticino; the Autobahn 13 branches off to the east.

Bellinzona is a transport hub. The Gotthard , Lukmanier , San Bernardino and Nufenen Alpine passes can be reached from here.

The city is on the Autobahn 2 (Switzerland) ( Basel –Gotthard – Bellinzona – Lugano– Chiasso ). The A13 motorway ( St. Margrethen - Chur - San Bernardino - Bellinzona) ends here. The main streets 2 and 13 cross in Bellinzona.

The Gotthard Railway from Lucerne or Zurich runs via Bellinzona station to Chiasso .

The local industry is mainly based on mechanical engineering . The Società Bancaria Ticinese is based in Bellinzona. The main employers are the Swiss Federal Railways (SBB).

The townscape of Bellinzona is classified in the inventory of protected sites in Switzerland (ISOS) as a site of national importance in Switzerland.

The entire complex of the castles of Bellinzona , the preserved parts of the city wall and the Murata , which cordoned off the Ticino valley, forms one of the most important examples of defense architecture in Switzerland. Since 2000 they have been part of the UNESCO World Heritage Site . Today's complex, the origins of which go back to a late antique core, is mainly the result of the construction work of the dukes of Milan in the 15th century.

The current square got its appearance in the 17th century.

The square has been the center of the place for ages. 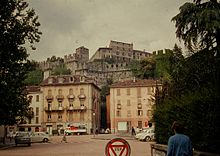 Placed in the 19th century.

Place in the style of the 19th century.

Outside the old town

The ice hockey club GDT Bellinzona has been playing in the third class first division since 2012 and plays its home games in the Centro Sportivo di Bellinzona.

Political communities in the Bellinzona district