This article deals with the municipality of Glarus in the canton of the same name , for other meanings of Glarus see Glarus (disambiguation) . 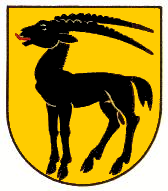 Coat of arms of the local community existing until December 31, 2010

The city of Glarus (local Swiss German Glaris [glɑrɪs] , French Glaris , Italian Glarona , Rhaeto-Romanic Glaruna ? / I ) is a political municipality (until 2010 local municipality, today a unified municipality ) and the capital of the Swiss canton of the same name, Glarus .

As part of the Glarus community reform , Glarus merged on January 1, 2011 with the communities Ennenda , Netstal and Riedern to form the new political community of Glarus . 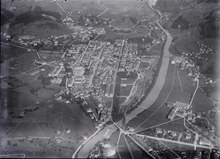 Historical aerial photo from 1000 m by Walter Mittelholzer from 1923

Glarus is located in the geographical center of the canton of the same name on the Linth and at the foot of the 2300 m high Vorderglärnisch . The highest point of the municipality is the 2914 m high Bächistock, which belongs to the Glärnisch massif . Neighboring communities are the communities Glarus Nord , Glarus Süd as well as Muotathal and Innerthal (both canton Schwyz ).

The place Clarona is mentioned for the first time in writing in the 8th century in a life story of Saints Felix and Regula . The name probably goes back to a Latin basic form * ad clārōnam "at the bright spot", in the figurative sense "forest clearing".

Until the end of the 14th century, large parts of the Glarus region belonged to the manorial power of the Säckingen monastery , until the inhabitants bought themselves out of it. The first Landsgemeinde took place in 1387 , an institution that still exists here today and is usually held on the first Sunday in May. Glarus became the capital of the Linth Valley by resolution of the Landsgemeinde in 1419, as the only church in the valley stood here for a long time. Between 1506 and 1516 Ulrich Zwingli , who later became a reformer, was a popular Catholic priest in Glarus. From 1522 to 1555 Valentin Tschudi was the first Protestant pastor, a moderate reformer and mediator between the two denominations. From 1555 to 1570, Fridolin Brunner followed as pastor, who had previously carried out the Reformation in several Glarus villages.

During the Helvetic Republic (1798–1803), Glarus was the capital of the canton of Linth.

In 1861 a devastating major fire raged , which destroyed large parts of the village. Only a few buildings from the time before the fire remained in the cityscape. The reconstruction took place very quickly according to an urban plan based on a rectangular grid. This type of urban planning, known mainly from the United States, was chosen to prevent further conflagrations of this kind.

Christian Marti ( FDP ) was confirmed in office in the municipal council elections on March 4, 2018. In addition to him, the municipality council has six other members. The new municipality of Glarus forms a district electoral district that provides 19 of the 60 Glarus district administrators.

The once important textile industry has almost completely disappeared. Today the wood and plastics industry as well as fabric and book printing predominate . The service sector has become the most important industry. The largest employer today is the cantonal hospital with around 450 jobs. Tourism is also gaining in importance.

The only recruiting office for the Pontifical Swiss Guard that is operated by a private personnel agency is located in Glarus .