The title of this article is ambiguous. Further meanings are listed under Stans (disambiguation) .

Stans is a political municipality and the capital of the canton of Nidwalden in Switzerland .

43.7% of the entire municipal area is used for agriculture. Another 36.5% is covered by forest and wood. In addition to 2.6% unproductive area, 17.2% is settlement area. 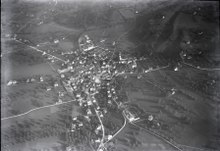 Stans, historical aerial photo from 1923, taken from a height of 600 meters by Walter Mittelholzer

The Gallo-Roman cremation graves from the 2nd century BC. Are the earliest traces of human presence in Nidwalden. The name Stans, which is derived from the Latin word stagnum (pond, standing water) is another indication of this. The community was first mentioned in 1172. In 1798, Stans was attacked by French troops, as Nidwalden rebelled against the new constitution by Napoléon Bonaparte . After these terrible days in Nidwalden , the teacher Johann Heinrich Pestalozzi took the orphaned children into his first school. The Nidwaldner Landsgemeinde was held in Oberdorf until it was abolished in 1997.

The population used to be fully members of the Roman Catholic Church. The denominational relationships in 2000 still show the original structure. 5354 people were Catholic (76.67%). In addition, there were 10.83% Evangelical Reformed and 1.02% Orthodox Christians, 2.96% Muslims and 5.13% non-religious. 190 people (2.72%) did not provide any information about their creed.

7,198 (86.96%) of the residents were Swiss nationals at the end of 2015. The majority of the immigrants come from Central Europe (Germany), Southern Europe (Italy and Portugal), the former Yugoslavia (Serbia / Montenegro, Kosovo and Bosnia-Herzegovina) and Sri Lanka. At the 2000 census, 6,256 people (89.59%) were Swiss citizens; 297 of them had dual citizenship.

The church has a high percentage of younger people. While the proportion of people under the age of twenty makes up almost 23.89% of the local population, only just under 18.24% are senior citizens (60 years and older). The largest age group is made up of people between 30 and 44 years of age. The average age is around 37 years.

The last census in 2000 showed the following age structure:

In 2017, of the 9,939 employees, 5,470 were male and 4,469 were female. Among other things, the largest Swiss aircraft manufacturer Pilatus Aircraft is based in Stans. Less than 30% of the jobs are filled by locals. Only a few employees in Stans still work in agriculture / forestry / fishing (sector 1). Around a third of the labor force is employed in industry and commerce (sector 2). The majority of employees work in service companies (sector 3).

The numbers for the 3 sectors are as follows:

Stans is located directly on the A2 Basel - Lucerne - Gotthard motorway . In order to relieve the community of alternative traffic on the motorway in the future, a traffic control concept was developed.

In 1893 the Stanserhorn-Bahn (SthB) opened, a funicular that leads to the Stanserhorn. About which opened in the same year Electrical streetcar Stansstad Stans was (StSt) connection with the steamers of Lake Lucerne in Stansstad. Due to competition from the Stansstad-Engelberg-Bahn (StEB), which opened in 1898 and runs from Stansstad via Stans to Engelberg , the tram was shut down in 1903. Due to financial difficulties, the StEB was initially shut down in 1964. As a result, the line was completely renovated and an extension was built up to the Brünigbahn in Hergiswil . The line was then reopened as the Luzern-Stans-Engelberg-Bahn (LSE) with a connection to Lucerne. At the beginning of 2005 the LSE merged with the Brünigbahn to form the Zentralbahn (ZB).

Political communities in the canton of Nidwalden