Sarnen is a municipality and the capital of the canton of Obwalden in Switzerland . 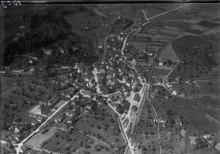 Sarnen, historical aerial photo from 1919, taken from a height of 150 meters by Walter Mittelholzer

The name Sarnen is of pre-Celtic origin and as "flowing water" contains the Indo-European root ser or sar with the meaning to flow (compare: Saar ). According to this, Sarnen was likely to be in the early Bronze Age , i.e. in the first centuries after 2000 BC. BC, have been settled. The first written mention of Sarnen comes from a deed of donation from the nobleman Recho to the St. Leodegar monastery in Lucerne . There the place name appears as Sarnono , the donation took place at an unspecified time between 825 and 909. In a document from Count Ulrich the Rich (Ulrich I) of Lenzburg from 1036, the place appears with the name Sarnuna , in the old Sarn calendar as Sarnon .

During the Helvetic Republic between 1798 and 1803, Sarnen was the capital of the Sarnen district in the canton of Waldstätte . In the mediation of 1803 the sovereignty of the half-canton Obwalden was restored and Sarnen has been the capital of Obwalden again since then.

Up until the mid-1990s, the Sarnen state transmitter was located near Sarnen , a transmission system for broadcasting in the medium wave range with a steep-beam antenna . It was used to broadcast the Beromünster radio program at night . This system is now out of service as a medium wave transmitter, but still exists and may be functional.

On August 14, 1468, between one and two in the afternoon, a devastating fire destroyed at least twenty-two houses, including the town hall built in 1418 . Brother Klaus is said to have extinguished the fire with a sign of the cross from Flüeli . On the night of April 5 to 6, 1919, there was a fire disaster in the village square of Sarnen. The guild and inn “Zum Schlüssel” and the residential building “Joller” burned down.

On August 9, 1831, there was a great flood by the Great Melchaa . Since this was not the only one, the Melchaa was relocated between 1878 and 1880 and since then no longer flows through Sarnen, but into Lake Sarnen. As a result, between 1881 and 1882 the outflow from the Sarnersee into the Sarner Aa had to be lowered. During the Alpine floods in 2005 , Lake Sarnen flooded its banks again and caused great damage in Sarnen.

After earthquakes in the 14th century, several earthquakes with an intensity of at least Io = VII occurred in the area of ​​Sarnen in the years 1774–1777. In the earthquakes of February 17 and March 14, 1964, several buildings in Sarnen were damaged so that they had to be supported. The Sarner parish church of St. Peter and Paul was also affected by the magnitude 5.7 earthquake.

In the 18th century there was no growth in the population because of the high child mortality rate. Between 1799 and 1880, the number of residents grew by around 60 percent. The population fell between 1880 and 1888. The reason for this was the lack of jobs and the resulting migration to other regions of Switzerland and overseas. The population has been growing steadily since 1888 and has exceeded the 10,000 mark in recent years. Numerous jobs were created in larger companies and there was also immigration from abroad. Therefore, the population increased by 13.37% or more than 1200 people between 2000 and 2018.

Almost the entire population speaks Obwalden German, a high Alemannic dialect in Swiss German. In the 2000 census, 91.0% stated German, 1.6% each Italian and Albanian, 1.2% Serbo-Croatian, 1.1% Portuguese and 0.5% Turkish as their main language.

The population used to be fully members of the Roman Catholic Church. The denominational relationships in 2000 still show this original structure: 7,180 people were Catholic (78.51%). In addition there were 7.75% Protestant and 1.22% other Christians (mostly Orthodox Christians), 4.06% Muslims and 4.33% non-denominational. 314 people (3.43%) did not provide any information on their creed. The secularization of the church and immigration from other communities and abroad has led to an increase in other denomination groups in Sachseln.

The following age structure emerged at the end of 2018:

The Obwalden Cantonal Hospital employs 440 people. Other major employers are the Leister Group in Kägiswil and the Obwaldner Kantonalbank .

Landsgemeinde 1987 on the Landenberg

The most important sights are the Landenberg (former seat of the governors, from the 17th to the 20th century the meeting place of the Obwalden Landsgemeinde), the village square , the Grundacherhaus and the Obwalden Historical Museum in the former Sarnen barracks .

The Hexenturm on the left bank of the Sarner Aa is also worth seeing . It is one of the few remaining castle towers from the time when the Swiss Confederation was formed and is a listed building by the Central Swiss Heritage Protection. It was built before 1291 and came into the possession of the state of Obwalden around 1308 after being taken without violence. In the following years it served as a prison, interrogation chamber, treasure tower, archive and museum. Today the Obwalden State Archive is housed in the tower, which also includes the White Book of Sarnen . In 2009 a new self-supporting steel staircase was added.

The parish church of St. Peter and Paul in the Kirchhofen part of the village is a closed, late Baroque building that, with its location above the lake, radiates far into the surrounding area. It is listed as a cultural asset of national importance . The collegiate church of St. Martin is also under monument protection, and its design is reminiscent of the work of the Swiss-French architect Le Corbusier . The St. Andreas convent is a place of pilgrimage with the Child Jesus from Sarnen from around 1360. In addition, the collection and music collection of the convent is one of the cultural assets of national importance.

Sarnen is known for its traditional music. In summer there is a small music festival, the HUIS Festival . The Obwalden canton library with an important historical book inventory is housed in the listed Grundacherhaus .

Information at the end of each year

Sarnen is well developed thanks to a full connection to the A8 motorway . The journey time to Lucerne is around 20 minutes. The Lucerne – Interlaken cantonal road runs right through the village.

Sarnen station on the Brünigbahn (today: Zentralbahn ) has made it possible to reach the village by rail since 1888. There are also bus connections with post bus lines . These lead to Alpnach -Dorf, Kerns , Wilen and on the Glaubberg . In summer, the Seestern cruise ship operates on Lake Sarnen and goes to all places around Lake Sarnen from Sarnen.

For the historical traffic situation in Sarnen, see the information from the canton of Obwalden .

The former Federal Councilor Doris Leuthard has been the first and only honorary citizen of Sarnen since May 2019 .

The life reform sanatorium Friedenfels was opened in Sarnen around 1900 .

The Sarner Schnegel (Limax sarnensis) nudibranch, first found by René Heim on the Faith Mountain near Sarnen, was recognized as a new species of snail in 2009 and named after the place where it was found.

Political communities in the canton of Obwalden