The city is bordered to the south by Lake Neuchâtel . In the northwest and north lies a section of the mountain flank of the first Jura chain up to the mountain ridge of the Chaumont in the municipal area. To the west is the Seyon Gorge . The Seyon is deflected in the city by a range of hills to the northeast and only flows into the lake about two kilometers further northeast. The mountain spur above the river formed the starting point for the development of the Neuchâtel settlement.

The old town of Neuchâtel consists of two areas: on the one hand the quarter on the hill above the Seyongraben and on the other hand the old lower town on the alluvial cone raised by the Seyon to the lake. On the hill and on its southern flank are the Collegiate Church, Neuchâtel Castle, the prison tower and the Tour de Diesse tower, as well as old residential quarters. The lower town consists of residential and business quarters. Most of the streets in the city center are closed to private motorized traffic. To the east of the city center is the university quarter, while the port of Neuchâtel is on the lakeshore. In the north, the old town is bounded by the railway line.

There are extensive alpine meadows on the Chaumont, on which numerous holiday homes have recently been built. 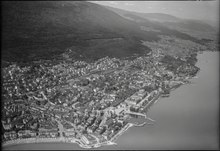 For the political and general development of the city, the region and the canton, see History of the Canton of Neuchâtel .

The first written mention of Neuchâtel dates back to 1011, when the Burgundian king Rudolph III. Novum Castellum (the new castle) gave his wife Irmengarde (Irmingard) a gift. This “new castle” was presumably where the prison stands today and was little more than a small garrison.

The city grew slowly. In 1180 Ulrich II of Neuchâtel and his wife laid the foundation stone for a new castle and the Eglise collégiale. Ulrich's descendants gave the Neuchâtel residents the status of a Free City in 1214. In 1250 the first houses were built on the left side of the Seyon River.

The Neubourg district, which still exists today, and the city wall were created. In 1349, the plague killed a third of the city's population.

In 1530, the French religious refugee Guillaume Farel (1489–1565), who was sent from Bern with a letter of recommendation, brought the Reformation to Neuchâtel. At first he could only preach in the little Chapelle de l'Hôpital. But soon he attracted so many listeners that he was allowed to preach in the city church. As a result, the local altars, statues, images and crosses were destroyed because they were considered idols. Only the tomb of the Counts of Neuchâtel survived this iconoclasm. Shortly afterwards, the city council joined the Reformation, but the aristocratic upper class remained Catholic until 1707. As a result, many French evangelical refugees found acceptance in the city and the surrounding area and helped shape the further development. The French author Antoine Marcourt was called as the first Protestant pastor. Farel traveled to Geneva to work with Jean Calvin for the Reformation. Pierre-Robert Olivétan became a private tutor in Neuchâtel; he met Farel in 1532 in the Piedmontese Chanforan with Waldensians to discuss a translation of the Bible into French. Olivétan translated the Bible into French and had it printed by Pierre de Vingle in Neuchâtel in 1535 as the first full French Bible. It was reprinted a little later in Geneva and other cities and is still considered the most important French translation of the Bible. When Calvin and Farel had to leave Geneva in 1538, Marcourt was called to Geneva and Farel returned to Neuchâtel as pastor. He introduced a church order based on the Geneva model. In numerous trips to Italy, France and Germany he stood up for the French-speaking Protestant believers. Today the Farel statue on the esplanade in front of the town church commemorates his work.

In 1579 the river Seyon burst its banks, destroying all bridges in the city as well as the town hall and the city archives below.

Between the 13th and 18th centuries, the city grew to the shores of Lake Neuchâtel and the mouth of the Seyon. Some wealthy patricians began building houses outside the old city walls, with some of the money also coming from the thriving slave trade. The Faubourg de l'Hôpital, the Faubourg du Lac, the Quartier du Lac and the later so-called Quartier Universitaire emerged. In 1838 the Académie de Neuchâtel was opened and became a university in 1910 .

In the years 1839 to 1843, the Seyon River , which repeatedly flooded the city, was corrected . It was diverted in tubes and a shopping street (the Rue du Seyon) was built on the site of the old river bed. The lake shore was also rebuilt several times in the 19th century. After the construction of the railway line and the train station (1859) on the flank of the Chaumont , the city grew further north. The tram line to Boudry was opened on the lakeshore . In 1930 the previously independent municipality of La Coudre was incorporated into the city of Neuchâtel.

In 1939 Brown, Boveri & Cie. the first gas turbine suitable for electricity generation with an output of 4 MW. In 1988 ASME listed the turbine as a Historic Mechanical Engineering Landmark . When the turbine failed in 2002, it was dismantled and exhibited in a pavilion in Birr , where it was originally built.

The conseil général ( General Council ) is elected proportionally every four years by the voters . Since the election on November 27, 2016, it has been composed as shown in the diagram below.

The executive is formed by the five-person conseil communal ( local council ). It is elected every four years by the electorate in parallel to the legislature . The city council changes annually among the members of the municipal council. At the moment (as of 2016) it consists of two representatives of the FDP , two Social Democrats and a Greens .

Neuchâtel is not only home to the authorities of the city and canton of Neuchâtel, but also the Federal Statistical Office . As part of the decentralization of the federal administration , it was moved from Bern to Neuchâtel in 1998 .

Coat of arms and colors

The city's landmarks, visible from afar, are the castle and the collegiate church (La Collégiale), which also houses the cenotaph (tomb of the Counts of Neuchâtel). The castle now houses part of the cantonal administration. Other attractions in Neuchâtel include the Tour des Prisons, the Maison des Halles and the Hôtel DuPeyrou . The Chaumont observation tower is located near Neuchâtel .

Another museum in the city is the Muséum d'histoire naturelle . The cantonal archaeological museum Laténium is located in the neighboring municipality of Hauterive NE .

Several festivals take place in Neuchâtel every year. These include the Street Music Festival and the Neuchâtel International Fantastic Film Festival . The best known is the Fête des Vendanges wine festival , which has been held annually in September since 1902 and now attracts over 100,000 visitors.

Since 2001 the Festi 'Neuch has taken place every year at the beginning of June , a four-day open-air festival with a program geared towards pop, rock, hip-hop and electro. The site is right on the lakeshore along the Jeunes Rives. While the first edition attracted around 3,000 visitors, the number of tickets sold increased to around 37,000 by 2010.

The city gained national fame in sport through the football club Neuchâtel Xamax , which became Swiss champions in 1916, 1987 and 1988 . The first team played in the 2018/19 season for the first time since bankruptcy in January 2012 in the Super League , the highest league in Switzerland. The venue is the Stade de la Maladière .

With the Hôpital Pourtalès, Neuchâtel has a public hospital with 24-hour emergency care. It belongs to the Hôpitaux neuchâtelois clinic network . With the Hôpital de la Providence there is also a private hospital in the city.

Neuchâtel is connected to the SBB and BLS networks with four stations . In Neuchâtel station , three pairs of trains run to the TGV in Frasne, which run between Paris and Lausanne. In Central Switzerland, Neuchâtel is served by trains on the St. Gallen - Lausanne route and Zurich - Geneva Airport on the Jura foot line as well as by S-Bahn trains, Regio-Express trains and regional trains.

Transports Publics Neuchâtelois , or transN for short , operate an extensive network of train and bus lines in the city and canton , in particular the Neuchâtel tram , which today only consists of an overland line to Boudry , and the Neuchâtel trolleybus (three lines) and various bus routes ; further three funiculars . One of these runs from Neuchâtel-Ecluse according to plan, another from Neuchâtel-La Coudre to the Chaumont. Neuchâtel-Gare has been linked to the lower town and thus to the university since 2001 by the town-owned Fun'ambule; transN also runs the business here.

There is a connection to the Swiss motorway network with the A5 , which runs in tunnels across the city.

Political communities in the canton of Neuchâtel