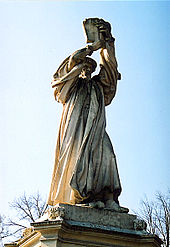 Statue of Farel in Neuchâtel

Guillaume Farel (* 1489 in Les Farelles near Gap in the Dauphiné ; † September 13, 1565 in Neuchâtel ) was a reformer in France and in French-speaking Switzerland as well as the predecessor and collaborator of Johannes Calvin .

Farel was a son of the papal notary Antoine Farel and the Anastasie d'Orcières. He resisted his father, who had planned a military career for him. In 1509 he began to study fine arts at the Sorbonne in Paris . His professor, the humanist Jacques Lefèvre d'Étaples (Jacobus Faber Stapulensis), influenced him strongly. Farel himself became a professor of philosophy and grammar at the Collège Cardinal Lemoine. He probably turned to the gospel in 1519 , as did his model Jacques Lefèvre d'Étaples. He also helped him translate the New Testament into Frenchto translate. Faber and Farel preached the gospel unhindered in Paris for several months. Faber left Paris because of the great resistance to his teaching in November 1519. The transcripts of the Leipzig disputation between Martin Luther and Johannes Eck were also distributed in Paris. The establishment there rejected Luther's tenets. His writings were burned in the streets in April 1521. So Farel went to Meaux in 1521 , called by Bishop Guillaume Briçonnet , a friend of moderate reforms.

He was expelled from Meaux in 1523 and went to Strasbourg , Zurich , Bern and Basel . His public disputation in Basel in 1524 on the differentiation doctrine of the Roman and Protestant Church was very successful. Nonetheless, his opponents, including Erasmus of Rotterdam , soon after forced his removal. Farel then met the reformer Martin Bucer in Strasbourg and preached in Metz . He introduced the Reformation in Montbéliard (1525), Aigle (1526), Lausanne , Orbe , Grandson , Yverdon and preferably in Neuchâtel (1530) and the surrounding area. In many places his passion, with which he campaigned for the new evangelical faith, was supported and promoted by the already reformed government of Bern.

On October 23, 1530, after Farel's sermon, materially valuable pictures, altars, figures and crucifixes in the cathedral of Neuchâtel were destroyed by the crowd with the participation of the priests. The governor's request to stop was disregarded as the general public supported Farel's ideas. A brass plate was made to commemorate this event.

In 1532 Farel took part in the Synod of Chanforan in Val d'Angrogna near Torre Pellice in Piedmont , which resulted in the Waldensians there finally joining the Reformation and Pierre-Robert Olivétan in Neuchâtel translated the Bible into French. In 1533 he called Pierre de Vingle , the first printer of the Reformation, to Neuchâtel; 1536 Jean Girard , who printed Calvin's writings, went to Geneva.

When the rigors of both reformers had expelled them from Geneva in 1538 , Farel chose Neuchâtel as the main place of his activity as pastor, where he remained until his death.

At the urging of Farel, Calvin arranged for the execution of the death sentence against the condemned humanist scholar and anti-Trinitarian theologian Michael Servet on October 26, 1553 by means of the stake. While going to the stake, Farel tried as a pastor to get the chained Servet to change his mind.

He initiated aid programs for the persecuted Evangelicals in France in 1552, in Locarno in 1555 and in 1561 for the Waldensians in Italy. Further mission trips to Switzerland, Germany and France left Farel very exhausted. He died in 1565.

Farel's sermons were centered heavily on Jesus Christ , His redeeming ministry, and God's free grace, which is acquired through faith. Like Huldrych Zwingli , he understood the Lord's Supper as a symbolic act; he was of the opinion that bread and wine were mere signs of the flesh and blood of Christ (see Lord's Supper Controversy ). Therefore, he was also actively involved in the Consensus Tigurinus of 1549.

Farel wrote 15 works in French. They are rather occasional writings of primarily historical importance without any major theological aftermath; his great strength was the oral word carried by ardent zeal, which could convince the audience, but sometimes also triggered resistance that could even show itself in verbal and physical violence against him.

In 1558, the 69-year-old Farel married Marie Thorel, an 18-year-old daughter of a French religious refugee, despite the disapproval of Calvin.