Melinda Gates (* 15. August 1964 in Dallas , Texas as Melinda Ann French ) is an American businesswoman, philanthropist and author . She is the wife of Bill Gates , whom she met at Microsoft , where she was the project manager for Microsoft Bob , Microsoft Encarta and Expedia , among others . 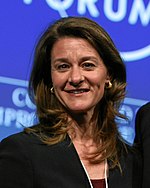 She graduated from Duke University with a bachelor's degree in computer science and economics in 1986 and received her MBA in 1987 . On January 1, 1994, she married Microsoft founder Bill Gates. The two have three children together, born in 1996, 1999 and 2002.

The existence of office assistants such as Clippy ( known as Karl Klammer in the German edition ) and the Microsoft Bob user interface are ascribed to her personal initiative .

Melinda Gates is a member of the Roman Catholic Church .

She and her husband founded the Bill & Melinda Gates Foundation , a charity , in 1999 .

Melinda Gates was elected to the American Academy of Arts and Sciences in 2012 and in 2013 by American business magazine Forbes as No. 3 on the list of the 100 most powerful women in the world .