Microsoft Office refers to an Office package from Microsoft for Windows , macOS , iOS , iPadOS , Android and Windows Phone . Different editions are offered for different tasks , which differ in the components contained, price and licensing. At the same time, subscription-based licensing of the entire Office software has been offered under the name Microsoft 365 ( Office 365 until April 2020 ) since 2011 .

Office 2008 has been completely redesigned with Xcode . The goal was processor independence, so that Office runs natively on Intel and PowerPCs ( Universal Binary ). With this version the rudimentary VBA support was dropped in favor of AppleScript support. Microsoft had justified this step by stating that the outdated program code could no longer be translated with modern compilers and that porting it to modern GCC compilers would be disproportionate difficulties. With Office 2011, VBA support was reintroduced. 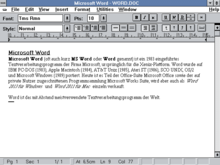 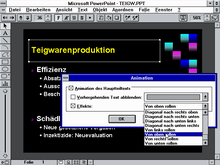 The first Office version for Windows appeared at the end of September or in October 1990 (English version). For the first time, it bundled the previously available individual programs Word for Windows 1.1, Excel for Windows 2.0 and PowerPoint for Windows 2.0 for Windows using a common installation program and already offered cross-program data exchange via DDE . This Office version was content with some. a. with EGA graphics, 2 MB RAM and a processor of the 80286 class, but already required a pointing device and - since Windows was not yet very widespread - could also be used under DOS with an adapted Windows runtime. In 1992 the version Microsoft Office 3.0 appeared, which in addition to Word 2.0, Excel 4.0 and Powerpoint 2.0 also included Mail 3.0. In 1994, the three programs Word, Excel and Powerpoint in the Office 4.x versions formed the “Standard” package, which in the “Professional” version was expanded to include the programs Access and Mail (4.0 and 4.3). They worked e.g. B. via OLE 2.0 together.

With Microsoft Office 2000 (Version 9), which appeared in mid-June 1999, a Pentium - compatible processor was specified as the minimum requirement; Support for Windows NT 3.51 was no longer available. At the end of May 2001, Microsoft Office XP (version 10) came out. With Office XP, the Windows version required product activation via the Internet or telephone for the first time . Without this activation, the program stopped working after a few starts. Windows 95 was no longer supported. Office XP was the last Office suite to run on MS-DOS- based operating systems ( Windows 98 / ME ).

On October 21, 2003, Microsoft Office 2003 (Version 11) was available for Windows . InfoPath form processing was also introduced there. The 2003 version only supported operating systems based on NT, whereby at least Windows 2000 had to be used. Support for Windows NT 4.0 and the Windows 98 / ME product lines was no longer available. Office 2003 is the oldest Office that is officially compatible with Windows 7 .

From version 2007 onwards, so-called ribbons (context-related function or menu bars) were introduced in the user interface .

Microsoft's office suites occupy a dominant position in the US and Europe ; the components Word , Excel , PowerPoint , Access and Outlook form the de facto standard in their respective fields of application in today's office environments and have formerly competing products such as the word processing system WordPerfect , the spreadsheets Quattro Pro and Lotus 1-2-3 or Symphony as well the Paradox database management system . The biggest competitors for Microsoft's office suite are OpenOffice.org and LibreOffice , which, depending on the study, have a market share of between 5% and 19%.

The FrontPage HTML editor , which was made for Windows, was the world's best-selling software in its market segment and was included in the premium version of MS Office 2000, XP and 2003. Nevertheless, development was stopped in 2003. "Microsoft Office SharePoint Designer 2007" took on similar functions in MS Office 2007, but requires a SharePoint server. In autumn 2007 Microsoft Expression Web succeeded Microsoft FrontPage .

Microsoft Office for Mac is localized and published in different languages.

Under Windows, the original English product can be expanded with MUI language packs, so that users can freely select the one that suits them from a list of installed languages ​​at any time. There are also versions for smaller language groups, which are based on the MUI interface and can be implemented by interested associations in cooperation with Microsoft. Since the summer of 2006, a language pack including a spell and grammar check for Rumantsch Grischun can be downloaded from the Lia Rumantscha for Office 2003 ; in spring 2007, an Alsatian version was presented by the Office for Language and Culture in Alsace (Office pour la Langue et la Culture d'Alsace, OLCA). The language packs are either installed later using a normal setup process or integrated directly into the Office installation by slipstreaming .

Since June 2010 Microsoft has offered a reduced version of the Word, Excel, PowerPoint and OneNote applications as Office Online (formerly Office Web Apps). They are part of Outlook.com and linked to other cloud offerings, including Microsoft OneDrive . As part of the presentation of Office 2013 and Windows 8 , Microsoft also presented a new version of Office Online, which is now based entirely on HTML5 . They can no longer only be used in Internet Explorer , but also in other browsers and especially in Safari under Apple iOS and iPadOS .

The following components belong to the current Microsoft Office system (Office 2010 for Windows , Office 2011 for Macintosh) and Office 2016 for Windows, Mac, iOS and Android , some of which are available in different editions and for the most part also or only as individual programs :

Components that are no longer included in the office packages (2010 and 2011):

1) still available as a single version
2) still available as a stand-alone version under Windows and not in the Office suite, discontinued under Macintosh
3)has been replaced by the individual products Microsoft Expression Web and Microsoft SharePoint Designer
4)was replaced in Office 2003 by the Picture Manager
5) Available under Office 97 as a “Draw 98” plug-in (download)
6)Development was stopped afterwards; the separately available program Microsoft Photo Suite was available (development also discontinued)
7) Windows version subsequently made available for free download
8th)In Office 2007 under the name Groove . Renamed to Microsoft SharePoint Workspace in Office 2010 , then completely discontinued

The different versions of Office are offered in different combinations, so-called "editions". These differ in the target group, the composition and the price. In addition, Microsoft changes the components of these compilations from version to version; H. the “Standard” edition of the 2003 version contains different programs than the 2010 version, etc. The packages also differ in the number of installation licenses, which is not always recognizable from the name of the edition offered.

The following important information is missing from this article or section:
There are no editions for Windows Phone Mobile, iOS, Android and Windows Phone
Help Wikipedia by researching and pasting it .

List of all final versions delivered to date that have been released for Windows, macOS or Mac OS Classic:

With version 7.0, which was only released for Windows, there was a multiple version jump in partial programs in order to:

The Mac and Windows versions received the same internal numbers from version 8 onwards, but could be distinguished by the designation (XP or vX and the other year numbers).

The following important information is missing from this article or section:
Mac versions and versions for tablets / smartphones are not included in the table
Help Wikipedia by researching and pasting it .

The table below contains a simplified representation of the interoperability of common document standards with Windows-based Office versions.

In newer Office versions, documents can also be exported to PDF format. As of Office 2013, the "PDF Reflow" function also offers the option of importing data from PDF files. According to Microsoft, however, the aim is not to replace display or editing programs for PDF files.

1The binary formats are not an open standard ; They are constantly being further developed and updated by Microsoft.
2 Officially referred to by Microsoft as "Ecma Office Open XML File Format".

An investigation by the Dutch government in late autumn 2018 came to the conclusion that Microsoft is using Office 2016 and Office 365 to collect personal user data and thereby violate the GDPR.