The installation of software , the process in which new programs or new versions of programs on an existing computer copied and thereby possibly configured. This process is usually implemented by installation programs. In addition, this process is especially under the operating system Windows and Setup (English for construction or configuration ) called. Based on this, the installation is also referred to as "putting on". 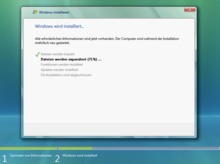 Successful installation is a prerequisite for the functioning of many computer programs. The more complex the program is, that is to say, among other things, the more individual files (or even file changes) in the more different locations a program consists of, the greater the risk that an error will occur during installation. If the installation fails even partially, the program often cannot be used. Therefore, especially with extensive programs, the development of a reliable installation process is an essential part of software development - also in terms of effort.

The term deinstallation describes the reverse process, i.e. the removal of software.

With the advent of the Internet and faster network connections, new techniques for distributing, installing, and updating programs have emerged.

In recent years ever more powerful standards and techniques have been developed to simplify and standardize the installation process. For example, the following basic methods can be used for a program installation:

Software usage without extensive installation is possible, for example, through portable software or in Linux systems using Klik .

So-called bootstrapping is necessary if the installation is to be carried out by a package manager or installer already installed on the system or integrated into the operating system. In this case it can happen that it has to be updated to a new version before the actual installation . For this purpose, a small program (usually called Setup.exe) is started, which carries out the upgrade for the installer or package manager and then starts the actual installation. This program is called a bootstrapper.

Before the actual installation (copying, registering), many installation programs check whether the new application to be installed is suitable for the system at all. The hardware equipment is checked, the version of the operating system and the other already installed program components. As part of the test, it is determined which files, libraries, components (see below) and configuration data are required.

Furthermore, the "integrity" of the installation files should be checked, that is, it should be ensured that the files or the archive are not damaged (for example using a checksum).

Generally these are copied to a (new) directory on the computer. Sometimes, however, some of the files also have to be copied into general directories or directories of the operating system.

Furthermore, it is usually useful or even necessary to remove old versions of the program beforehand - this is called deinstallation .

Libraries and components are software modules used by several programs. They may have to be installed during installation. Older versions that were previously installed by other applications or the operating system are often replaced. They must be registered with the system, i.e. made known in a manner defined by the system. This is a critical point, especially with Windows programs.

Registration with the operating system

Under Windows this is possible via the control panel, from Windows 8 this point was called "Programs and Features", from Windows 10 "Apps and Features", in Windows 7 this point was called "Software". In Windows-specific installation programs such as MSI and experts, this area is also known as ARP , as the original English name was "Add / Remove Programs".

Sometimes the installation program also carries out an initial configuration of the installed program. To do this, it checks the system or asks the user about the necessary settings, for example the type and speed of the network connection. A distinction must be made between user-specific and computer-specific settings: The former only affect the currently logged on user, while the latter affect all users of the system.

Completion of the installation

Particularly when libraries have been replaced, the system may have to be restarted completely or in part (e.g. the printer service) in order for the changes to take effect. The cause is usually that the affected files, services and logs are already in use at the time of installation and therefore cannot be updated immediately. If this situation occurs, the following solutions are possible:

A currently very popular format for Windows is the MSI installation package, which is installed by the Windows Installer . Company-made tools to make installers for Windows include: B. InstallShield , SetupBuilder , Wise , ScriptLogic (previously MaSaI Solutions ), InstallAware , the multiplatform tool InstallBuilder from BitRock (free for open source programs) and OnDemand . Most of these tools can generate both MSI packages and regular standalone installers in the form of an executable file. For eComStation there is the program WarpIn for the same purpose.

Free alternatives are e.g. B. NSIS , FWPinstaller , Inno Setup , IzPack , InstallForge and WiX (from Microsoft) for Windows, Checkinstall for Linux .

Many programs can also be installed without the installation program by simply copying the files. The prerequisite for this is that neither registry entries have to be created nor more extensive changes have to be made to the system. In addition, links or entries in the start menu must be created manually.

With installation programs on CD-ROM or DVD for Windows, the autorun function is often used to start them automatically when they are inserted.

Even the installation of a program has to provide for deinstallation and update capability, to put it simply, that it can be deinstalled again (easily and reliably), that other applications or the system stability are not negatively influenced by deinstallation. Depending on the operating system, the repairability of the application must also be guaranteed, for example with Windows.

An installation must be stable, that is, it must be reliable and feasible without errors or difficulties.

With current operating systems ( Linux , Windows , macOS ), administrative permissions are often required to install software . A normal user is not authorized to carry out installations because of the high risk.

Executable installation programs that were created (for example) with Inno Setup , Nullsoft Scriptable Install System , WiX Toolset etc., as well as self-extracting archives that were created (for example) by 7-Zip , IExpress , WinRAR , WinZip etc. are in particular if they are executed in directories that can be written by normal users, such as the Downloads or Temp folder, they are prone to DLL hijacking .

Powerful installation tools also allow one or more installations to be undone (so-called transaction-based rollback ). Sometimes it is also possible to reset a system to the status at a specific point in time. This is important on productive servers if several jointly installed patches have caused the machine to malfunction.

Questions to be clarified