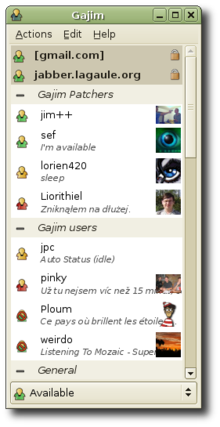 Instant Messaging [ ˌɪnstənt mɛsɪdʒɪŋ ] (short IM ; English for instant messaging ) or instant messaging is a communication method , two or more participants to chat via text messages in. The sender triggers the transmission (so-called push procedure) so that the messages arrive at the recipient as immediately as possible. In order for messages to be transmitted, the participants must be connected to a computer program (called a client ) via a network such as the Internet directly or via a server . As a rule, messages can also be sent when the conversation partner is currently not online ; the message is then cached by the server and later delivered to the recipient when he can be reached again.

Many instant messengers also support the transfer of files and audio and video streams .

Users can manage each other in their contact list and then see from the presence information whether the other is ready for a conversation.

The ICQ, launched in 1996, is the first Internet-wide instant messaging service . Instant messaging is a very widespread form of telecommunications, especially as a replacement for SMS ( Short Message Service ) in mobile communications (which is associated with additional costs on the part of the network provider) . With the proliferation of smartphones and mobile Internet access, IM has become one of the most widely used services on mobile devices. The Snowden revelations and Facebook's acquisition of the popular messaging service WhatsApp led to great demand for end-to-end encrypted IM services and the development of numerous new encrypted alternative providers, which are often also available as open source .

The expression "instant message" was coined by Paul Linebarger . In his science fiction stories from the 1960s, he used it to describe messages that could be sent over interstellar distances at faster than light speeds . His "instant news" was considered extremely expensive, and he wrote a few episodes about the unaffordable news.

Users can only communicate with interlocutors who use the same protocol . Most IM services use their own, proprietary protocols such as ICQ , WhatsApp and Skype .

There are also open protocols such as IRC , XMPP , WebRTC and the Echo protocol or Tox . Many are mostly defined in open standards as RFCs . There are a number of different clients for various operating systems for these open protocols. The users are therefore not tied to a specific IM service, but only to an open and standardized protocol. - A comparison with the likewise federated e-mail system can serve as an analogy , in which the user is only bound to open and standardized application protocols such as SMTP , POP3 or IMAP , but not to a specific provider. Instant messaging protocols are increasingly also end-to-end encrypted, as is the case with the open source and very elaborate encryption suite for instant messaging and e-mail called "Spot-On".