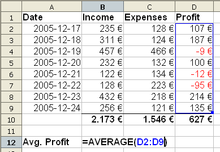 A spreadsheet is software for the interactive input and processing of numeric and alphanumeric data in the form of a table . In many cases, it also allows the results to be shown graphically in various display formats.

The software's screen window is divided into rows and columns. Depending on the program or operating concept is this area, for example worksheet , worksheet or spreadsheet . Each cell in the table can contain a constant (number, text, date, time ...) or a formula. There are usually numerous library functions available for the formulas . The formulas can use values ​​from other cells.

When the referenced cells of a formula are changed, the software normally updates the first displayed value of the formula cell automatically, but if necessary only on request. If formulas of a table field are copied to other places, a distinction must be made between absolute and relative cell references . Formula cells can reference other formula cells. With this principle, complex calculations with many linked partial results can be clearly displayed. 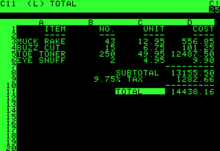 Visicalc , the first spreadsheet program, on an Apple II

The first software for spreadsheets was created in 1979 by Dan Bricklin for the Apple II under the name Visicalc . VisiCalc was the first commercially usable computer program whose operation did not require a programming language. This made from Apple, the hitherto somewhat of hobbyists and hobby was used a computer for business applications. VisiCalc has been adapted to many other computer models, including a. Apple III , TRS-80 model 3, TRS-80 model 2, Commodore PET CBM-80, HP 125 , Atari 800 and 1981 IBM PC. VisiCalc was further developed in 1983 by the Lotus company under Mitch Kapor for the PC to Lotus 1-2-3 . The first program that allowed three-dimensional spreadsheets with pages, rows and columns was Boeing Calc , developed by the computer department of the aircraft manufacturer Boeing .

By Borland in 1987 developed comes Quattro Pro , the 1994 Novell continue and later at Corel was sold. The spreadsheet programs Multiplan (for CP / M and MS-DOS ) and Excel (for Mac 1985 / Windows 1987) are from Microsoft . In the GNU project , the Gnumeric program is being developed under GNOME . The OpenOffice.org office suite also contains a spreadsheet: Calc; also KOffice from KDE KSpread .

In the late 1980s, Lotus tried to set new standards for spreadsheets with Improv . Instead of collecting numbers, views of the data - for example in diagram or table form - and formulas in a single worksheet, these concepts should be processed separately. The tables only contained the pure raw data, data series could be given an identifier (such as “number” or “unit price”). Formulas were entered in a separate program area, whereby the data was not referred to by row and column numbers, but by means of the identifier ("total = number * unit price") . In addition, Improv also allowed similar data sets to be combined in groups (for example monthly sales in the groups “2007” and “2008”). Although Improv initially developed into a killer application on NeXT systems, it could not establish itself on other systems. Many Improv concepts can now be found in modern spreadsheet programs (such as the grouping of data that is implemented with pivot tables ).

The development of technologies such as Ajax and XUL led to the emergence of spreadsheets like Google Docs , whose spreadsheets no longer run on a workstation, as was previously the case, but on a locally remote server: online spreadsheets . This allows working groups to work together on online documents, whereby the individual users can be physically distant from one another.

The functionality of a spreadsheet can be greatly expanded by using macros in BASIC and other functions for external data access.

With the help of spreadsheets, arithmetic applications (such as wage tables, accounting data, individual statistical values) can be clearly listed, edited, presented, saved and reloaded without having to edit data tables using a programming language or running program (as was the case in the early days of computers).

A typical application of spreadsheets is calculating financial models and running business games. The software immediately shows the effects of changes to individual parameters.

Today, however, spreadsheets are often used in the office as a simple replacement for real database tables . The sheets then contain no formulas at all, or the calculations are limited to simple sums over columns or rows.

Spreadsheet for solving and linearizing a polynomial

The spreadsheets can provide valuable help when solving demanding mathematical problems and sometimes make a decisive contribution to the solution. It is helpful that graphics can be created very easily from calculated tables, which immediately show every change in the selected cells. Usually a computer algebra system is used for such problems .

Overview of some programs with spreadsheets