Paul David Hewson grew up with his parents, Brendan Robert "Bob" Hewson and Iris (née Rankin), as well as his eight years older brother Norman Robert Hewson in a suburb of the "Northside" of Dublin (Finglas). The father was Catholic , the mother Anglican .

His school friends called him Bono Vox (from Latin bona vox for "good voice"); this nickname, shortened to Bono , became his stage name.

In 2001, Bono's father died of cancer. Bono dedicated the songs Sometimes You Can't Make It on Your Own and One Step Closer , which appeared on Atomic Bomb's 2004 U2 album How to Dismantle, to him.

Bono has been married to Alison Hewson since August 1982. The couple have two daughters, including actress Eve Hewson , two sons and live in Killiney , a suburb south of Dublin .

At the age of 15, Bono discovered his passion for music and playing guitar. He was inspired by the music of bands like the Patti Smith Group , Thin Lizzy or the Ramones .

In 1976 he registered at the Mount Temple School in Dublin on a notice from Larry Mullen junior , who was looking for musicians to start a rock band . After several name changes (from “Feedback” to “The Hype”), this band became U2 in 1978 .

On March 31, 1995 , Bono performed live on stage at an aftershow by Prince in Dublin at The Pod music club and sang the song The Cross , released on the album Sign "☮" the Times .

Since 2005 he has worked with guitarist The Edge on the music for the Broadway musical Spider-Man: Turn Off the Dark , which premiered in 2011.

Bono uses his fame for political and social purposes. His main concerns are the fight against AIDS in Africa and debt relief for third world countries . In addition, he was committed to the victims of the war in Bosnia-Herzegovina , so u. a. 1992 with a live satellite connection during a concert in London to the encircled Bosnian capital Sarajevo . At his suggestion, U2 took part in the Live Aid concert (to fight the famine in Ethiopia ) in July 1985 and in the Conspiracy of Hope tour for Amnesty International .

Bono was at the campaign involved "Jubilee 2000", which campaigned for it to take the new millennium as an opportunity to adopt the poorest countries debt, thus enabling them new development opportunities. Together with several other campaigners and Bill and Melinda Gates , he founded the organization “ Debt, AIDS, Trade in Africa ” (DATA) in 2002 , which campaigns for debt relief , free trade and the fight against AIDS in Africa. DATA is currently mainly involved within a joint association of several aid organizations called " Make Poverty History ".

In 2005, Bono and Bob Geldof organized the re-release of Live Aid under the name Live 8 . This was a global rock concert with the motto "Make Poverty History", which took place on July 2, 2005 at ten locations of the G8 member states as well as in South Africa . The concerts were intended to increase the pressure on the leading politicians of the rich countries to resolve debt relief for the Third World countries.

At the initiative of US Treasury Secretary John W. Snow , Bono was brought up for discussion as the new President of the World Bank in March 2005 . He could not be excluded as a candidate, Snow told the US broadcaster ABC .

At the concert of your voice against poverty on June 7, 2007 in Rostock Bono unexpectedly came on stage and sang the song Mensch with Herbert Grönemeyer . Bono sang in German and in between “Keep your promise” (German: “Keep your promise”). Together with Youssou N'Dour , Bob Geldof and Campino , he also sang the title You Never Give Me Your Money .

Bono wrote the foreword of the book The End of Poverty by Jeffrey Sachs . 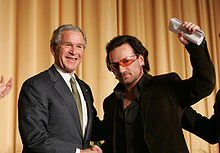 Bono with US President Barack Obama (2010)

Many critics repeatedly accuse Bono of being untrustworthy in his political commitment. The American director Joel Schumacher said in an interview in 1989: "When Bono tells me that the sky is blue and the grass is green, then I have to work very hard to believe him." The style of his public appearances on the side of well-known politicians, Bono repeatedly brought in the criticism of allowing himself to be abused by the political and economic rulers to improve his image.

Bono has also been criticized for paying tax on part of his income in the Netherlands, where he only has to pay about one percent of it to the tax authorities, and at the same time calling on industrialized countries to increase their development aid.

Bono is mentioned in the Paradise Papers . He is said to have a ramified network of mailbox companies. An investigation has been launched by the Lithuanian tax authority VMI against one of his companies that financed a shopping center in Lithuania . The allegation is: "The profits of the shopping center are said to have been booked incorrectly and taxes were not paid as a result."

In addition to various awards as a band member of the U2 group, Bono received the following recognitions for his political and social commitment:

Guest contributions as a solo musician