The American Broadcasting Company ( ABC ) is a television and radio - Network in the United States and now belongs to the Walt Disney Company . The main office is in New York City .

The company was formed in 1943 from the break-up of the National Broadcasting Company (NBC) and has been called ABC since 1945 . The station began broadcasting its program in 1948. In 1985, ABC was taken over by the much smaller media company Capital Cities Communications for the record sum of 3.5 billion US dollars at the time, with Warren Buffett taking a substantial share . With the takeover of Cap Cities / ABC by the Disney Group, the Disney-ABC Television Group was created in 1996. The "flagship" of the ABC television station is WABC-TV in New York City.

In the 1930s, the private radio market in the United States was dominated by the networks that only emerged at the end of the 1920s. These supplied so-called affiliates nationwide via telephone lines - independent but associated radio stations - who at certain times took over the programming of the network's own radio station, which acted as the network's lead station. 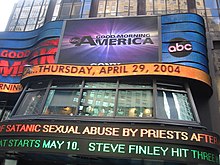 The Federal Communications Commission (FCC), which as the competent authority continuously followed this development, published the "Report on Chain Broadcasting" in 1940, which analyzed the operation of the broadcasting chains. The report stated that the four networks NBC Red , NBC Blue , CBS and MBS dominated the radio market. The FCC recommended separating the two particularly dominant networks of the National Broadcasting Company (NBC) from one another. In particular, there was the accusation that the Radio Corporation of America (RCA) was only trying to prevent serious competition from the successful music and entertainment network NBC Red by operating the news and cultural network NBC Blue, which was partially ad-free.

Since the networks themselves did not require a license, there was no possibility of regulation for the FCC. Instead, the FCC took an indirect route and started with the radio stations; the new regulation that no radio station should receive a license that is associated with a network that operates more than one network was all too clearly aimed at NBC. NBC went to court and sued against the illegal regulation by the FCC, which was ultimately right on appeal.

NBC then made the decision to sell the smaller Blue Network ; The Red Network was not only larger and extremely successful, but also had a large number of affiliates with powerful “clear channel” stations that could be received in large parts of the country due to the protected frequency. The division of the values ​​of NBC Red and NBC Blue took the years 1942 and 1943 to complete; NBC Blue was ultimately valued at around $ 8 million. The sales package included the rental of the copper cable lines and the production studios in New York , Washington , Chicago and Los Angeles ; Contracts with speakers and about 60 affiliates; the “Blue” brand, including goodwill; Licenses for the three own radio stations NJZ in New York, KGO in San Francisco and WENR in Chicago.

The RCA finally found a solvent buyer in Edward John Noble , owner of the Life Savers confectionery and the Rexall drugstore chain. In order to enable the transfer of the broadcasting licenses, Noble had to sell his own New York radio station WMCA beforehand. This was followed by uncomfortable hearings by the FCC, with Noble initially refusing to sell airtime to unions. Only when the trade threatened to collapse and Mark Woods - who handled the sale for the RCA and was also President-elect of the new Blue Network - asked Noble to reconsider his position, the latter buckled; the deal came about on October 12, 1943. The NBC Blue Network thus became The Blue Network , which was owned by Noble's American Broadcasting System .

As early as mid-1944, Noble renamed his network the American Broadcasting Company (ABC), which triggered a series of renaming: CBS changed the callsign ( callsign ) of its New York main station from WABC-AM to WCBS-AM. ABC took over the abandoned callsign WABC in 1953 for its New York main station WJZ and its sister television station, which received the callsign WABC-TV. The callsign WJZ was again taken over by Westinghouse in 1959 for its newly acquired television station in Baltimore .

ABC Radio grew slowly because it actually had to build up a completely new audience. Noble acquired other radio stations, including WXYZ in Detroit, which had been an affiliate of NBC Blue since 1935. WXYZ became an ABC figurehead through which the programs or their speakers "The Lone Ranger", "Sergeant Preston" and "The Green Hornet" achieved their national breakthrough. Another purchase from Noble was KECA (now KABC ) in Los Angeles, which gave ABC access to Hollywood .

One of ABC's specialties was “counter-programming”, for example the lively quiz show Stop the Music! against rather slow radio broadcasts on NBC and CBS. And unlike the rest of the networks, they used pre-recorded programs instead of live programs; This made possible progress in the tape recording process, which had been acquired as "spoils of war" in Germany, and which the audience could no longer distinguish from live broadcasts. Numerous well-known artists who did not want to be committed to a fixed schedule, therefore preferably signed a contract with ABC, including Bing Crosby . Although the number of listeners was still number 4, ABC had caught up with the established networks by the end of the 1940s.

In 1957, ABC founded the subsidiary ABC Films, which was later sold and renamed Worldvision Enterprises .