The title of this article is ambiguous. See Baltimore (disambiguation) for additional meanings .

Baltimore [ bɔːltɪmɔːɹ ] ( USA ) is the largest city in the US state of Maryland and the independent city ( county-level city ) since 1851 no longer part of the adjacent Baltimore County . Baltimore has approximately 615,000 inhabitants (2016 estimate, US Census Bureau ) and is one of the most important seaports in the United States. It is the center of the Baltimore metropolitan area .

Baltimore is home to the home and grave of the writer Edgar Allan Poe and that of the writer and satirist Henry L. Mencken , who was also born there. Baltimore continues to be the birthplace of famous baseball player Babe Ruth , writer Tom Clancy, musician Frank Zappa and swimmer Michael Phelps , who is considered the most successful Olympian of all time. Baltimore was also the inspiration for the American national anthem . There are many historical buildings and nationally known monuments in the city. In addition to two major universities, Baltimore has numerous other educational institutions and museums. 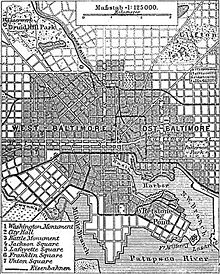 The city was founded in 1729 and named after the first and second barons Baltimore , the British founders of the Maryland colony.

The name Baltimore is of Irish origin and named after another Baltimore in the Irish county of County Longford . It is based on the Irish "Baile an Tí Mhóir" , which means "place of the big house".

Initially designed as a port for the tobacco trade , the city quickly developed into the center of trade with Europe and the Caribbean . When Philadelphia was occupied by the British in 1777, the Continental Congress met in Baltimore . In the British-American War of 1812 the British attempted to eliminate the privateers operating from Baltimore . The resulting battle at Fort McHenry in 1814 inspired Francis Scott Key to write the text of the later American national anthem, The Star-Spangled Banner .

On December 28, 1827, the Baltimore & Ohio Railway Company laid the foundation stone for the USA's first railway line in Baltimore , which was inaugurated on May 24, 1830. It was initially planned as a horse-drawn tram , after a race between the Tom Thumb locomotive and a horse, all the horses were taken out of service on July 31, 1831 and switched to steam operation, although the horse had won. In 1835, one of the worst civil unrest in the United States of the 19th century broke out in Baltimore after the Bank of Maryland collapsed and investors lost their savings. Twenty people were killed and around one hundred injured when the militia intervened.

From 1831 to 1835 the young Edgar Allan Poe lived in Baltimore with his aunt Maria Clemm. He began his career as an inventor and master of short stories here in great poverty, then lived in Richmond (Virginia) , Philadelphia and New York City , around 1849 to die in a manner that has not yet been fully enlightened in Washington College Hospital in Baltimore. He is buried in the graveyard of the former Presbyterian Church of Westminster (today: Westminster Hall and Burying Ground ).

Thanks to the good rail connection to the Midwest and the establishment of a regular steamship service from North German Lloyd from Bremerhaven to Baltimore, the port developed into the second largest port of immigration in the USA after New York .

Baltimore City Hall has been the seat of the mayor and city council since it was completed in 1875 .

Scene from Baltimore after the great fire in 1904

On February 7, 1904, large parts of the city fell victim to a major fire. Four people were killed. The estimated property damage was around $ 150 million.

Following the assassination of Martin Luther King on May 6, 1968, violent riots broke out in Baltimore, as in over 100 other cities. In Baltimore these were particularly extensive, as the social change towards de facto racial segregation was particularly pronounced in the city. Whites moved to the suburbs while blacks stayed in the old city. The Governor of Maryland Spiro Agnew reacted with particular severity from April 11th, his policy being seen as the beginning of the military build-up of the police force in the United States. More than 10,000 National Guard and US Army men were called into the city, and over 5,000 arrests followed, most of them for violating the curfew .

24 sites in the city have the status of a National Historic Landmark due to their historical significance . 294 structures and sites in Baltimore are on the National Register of Historic Places (as of November 11, 2017).

The heavy industry held in 1897 with the Sparrows Point steel mill feeder. During the city's heyday shortly after the Second World War, a steelworks owned by Bethlehem Steel , the aircraft manufacturer Glenn-Martin , the Bethlehem Sparrows Point Shipyard , a General Motors car factory and several food factories were located there. 45,000 workers were employed in the shipyards, 50,000 in the aircraft industry and 30,000 in the steel mill.

In the following decades there was a strong de-industrialization . Today the Johns Hopkins Hospital is the largest employer. 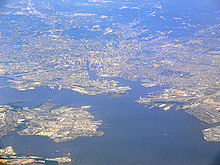 Baltimore with its extensive port and industrial facilities

Located at the confluence of the Patapsco River in the Chesapeake Bay, the port of Baltimore is one of the largest seaports in the USA; it was the starting point for the history of the town's settlement. The city is a transportation hub between Washington, DC and Philadelphia and maintains the Baltimore-Washington International Airport (BWI).

The Chesapeake Bay is also considered the cradle of the American canning industry . In the 1860s, several large corporations emerged that specialized in canning oysters .

At the end of the 18th century, Baltimore became known worldwide for the Baltimore clippers , mostly two-masted topsail schooners, which were designed entirely for speed and had their heyday between around 1795 and 1825. They marked the beginning of the era of the speed sailors.

Baltimore is home to many companies in the health, beauty, and medical and pharmaceutical industries. Many research institutions, both from business and government laboratories , are also based in and around Baltimore. In addition to private laboratories, the city has 61 state-level research laboratories.

Baltimore is currently the largest American city without a Fortune 500 company.

The metropolitan area of ​​Baltimore generated an economic output of 187.4 billion US dollars in 2016, making it 19th among the greater metropolitan areas of the United States. The unemployment rate was 4 percent, slightly above the national average of 3.8 percent (as of May 2018).

The flag of Baltimore depicts the Battle Monument , a local monument erected between 1815 and 1825. It was built by veterans of the war of 1812. The background is in the colors of the Calvert family (bearers of the baron Baltimore title ) - as is the flag of Maryland . The North American Vexillological Association rated the flag positive in 2004 (it ranked 18th out of 150).

Baltimore is hardest hit by poverty, neglect, drug addiction and suburbanization of any major US city . The city has a high crime rate, with - among other things - almost 300 homicides per year, although this rate has leveled off again to 300 homicides per year in recent years after a brief decline. In 2008, 234 homicides were reported, but in 2018 again 309 people were victims of homicides.

This crime difficulty is familiar to many American television viewers through the series Homicide and The Wire . In the series “The Wire”, one of the city's nicknames is therefore “Body more, Murderland”, an allusion to the full mention of the name with the state (“Baltimore, Maryland “), As is customary in the USA.

According to The Baltimore Sun , between June 2012 and April 2015, nearly 2,600 detainees in police custody were denied admission to the city detention center because they were badly injured. According to the documents, 123 detainees had visible head injuries. Others had broken bones, facial injuries, and high blood pressure.

In July 2019, Donald Trump described the constituency of MP Elijah Cummings in the city as "a disgusting, rat and rodent-infested chaos" in several short messages . But he drew attention to the conditions in the residential complexes of his son-in-law Jared Kushner , in which fines of $ 13,200 have been imposed since 2017 for mold, rodent infestation and other defects. Of 899 housing units owned or owned by Kushner, 200 failed annual inspections. The animal welfare organization PETA responded with a billboard on which it placed a man (Kushner) sitting on a pile of money opposite a mouse with a piece of cheese.

Founded in 1916, the Baltimore Symphony Orchestra (BSO) is one of the great symphony orchestras in the United States of America. It gained an international reputation under the direction of music director David Zinman (1985 to 1998). During this phase he won the 1990 Grammy Awards for a recording of works for cello and orchestra by Barber and Britten with Yo-Yo Ma as "Best Solo Instrument Performance with Orchestra". In 2007/2008 Marin Alsop took over the leadership of the Baltimore Symphony Orchestra as the first woman in history to head a large US orchestra.

The problems of the city inspired Randy Newman to write his famous song Baltimore , which was also interpreted in a German version by Nina Simone , Nils Lofgren and Udo Lindenberg .

In the poem Incident by Countee Cullen , Baltimore is mentioned as the place where a young boy first encountered discrimination against blacks.

The plot of the musical Hairspray , of which there are also two film versions ( original from 1988; remake from 2007), takes place in Baltimore in 1962.

Baltimore was the seat of the "Baltimore Gun Club", which in Jules Verne's novel From Earth to the Moon sent the first people to the moon.

The critically acclaimed television series The Wire (2002-2008) is set in Baltimore and describes the high crime rate and social problems of Baltimore.

Baltimore has been the location for films such as Enemy of the State # 1 and Sleepless in Seattle (the Fell's Point neighborhood). In The Attack (2002) , an atomic bomb explodes here and a large part of downtown Baltimore is destroyed. 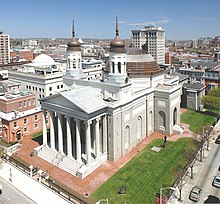 National Shrine Basilica of the Assumption (2007)

The National Park Service has 25 National Historic Landmarks for Baltimore as of December 2016, including the B&O Railroad Museum, USS Constellation , the National Shrine of the Basilica of the Assumption, and the Edgar Allen Poe House and Museum. 298 buildings and sites in the city are listed on the National Register of Historic Places (NRHP) (as of November 17, 2018).

Wikinews: Baltimore  - on the news

Counties in the US state of Maryland