The title of this article is ambiguous. For further meanings of laboratory and laboratory, see laboratory (definition of terms ) . 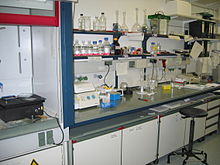 Laboratory at the Institute for Biochemistry at the University of Cologne, 2004

Laboratories can be found in chemistry , physics , biology , pharmacy , medicine , engineering , photo technology , IT security, experimental psychology and economics . A well-known example outside of the classical natural sciences is the “ sleep laboratory ”. Laboratories can not only be set up as stationary, but also for mobile use in vehicles or for temporary use in containers (laboratory containers). The same requirements apply to their equipment as to stationary laboratories.

Laboratories (company laboratories) are also widespread in industrial companies, where B. the quality inspection of incoming materials, as well as the review of the properties of manufactured products and also the product development.

In a figurative sense, the term is also used in the artistic field, for example in dance or music one speaks of a laboratory , lab or laboratory when research is carried out in free form in border areas of the genre .

The laboratory equipment depends heavily on the type of facility and takes into account the special requirements in terms of safety, cleanliness, and the availability of materials, tools and devices. 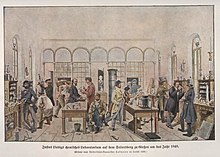 In chemical and biochemical laboratories, many different glass devices ( round bottom flasks , distillation bridges , condensers, beakers, etc.) are required with which analyzes and syntheses are carried out. In addition, when working with chemicals, the standard procedure is to work inside fume cupboards, in which chemicals released during open handling (e.g. when weighing / dosing), gases or aerosols that are produced are sucked out of the air during the reaction, and which the workers can use in the event of an accident Protect from splinters or splashing liquids. The latter applies in particular when working with evacuated equipment ( desiccators , vacuum distillation ). In microbiological laboratories, safety workbenches are also used, which are kept sterile by suitable pumps and filter systems in order to protect the worker and his experiments from the influence of microorganisms .

Due to the handling of harmful and flammable substances or the risk of contamination from biological agents, it is not allowed to eat, drink or smoke in chemical laboratories; in addition, it is usually necessary to wear suitable protective clothing ( laboratory coat , suitable other clothing, protective goggles , protective gloves , sturdy shoes ) mandatory. Flammable or otherwise dangerous substances are kept in safety cabinets.

Laboratories in physics usually have connections for three-phase current , compressed air and cooling water lines that are separate from the normal drinking water network . The equipment also includes various mostly electronic measuring devices , often also vacuum apparatus and, depending on the special field of work, other devices. An important type of laboratory, especially in solid-state physics, is the clean room , in which a particularly clean, especially dust-free work environment prevails due to a special ventilation system, the wearing of protective clothing and the avoidance of certain activities.

In the engineering sciences, a laboratory is not only referred to as appropriately equipped and used rooms, but also a class of courses at universities and technical colleges in which practical skills and the use of certain devices, software , etc. should be trained on the basis of exemplary tasks.

Protection levels according to the Hazardous Substances Ordinance (Germany)

According to the Ordinance on Hazardous Substances , the hazardous substances used in the laboratory must be checked for risk. In addition to the classification with the hazard characteristics (i.e. toxic, highly flammable, etc.), the frequency of use, the quantities used and various physical properties, such as the concentration in the air, the distribution, etc., and the working conditions must be taken into account.

Based on this data, the classification is then made:

Protection levels according to the Biological Agents Ordinance (Germany) 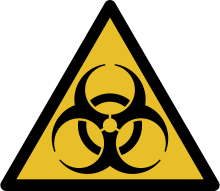 Safety levels according to the genetic engineering law (Germany)

Marking of a genetic engineering work area of ​​safety level 2, the symbol for biohazard is also required.
→ Main article : Security level according to the Genetic Engineering Act