Richmond lies on the James River , about 150 kilometers upstream from its confluence with Chesapeake Bay . The location of the city is characterized by the transition from the Atlantic lowlands to the Piedmont hill country , which lies in front of the Appalachians .

Captain Christopher Newport dropped the first English reconnaissance force in 1607 in the area, which was later to be named after a suburb of London . Until then, the area was owned by Indians who belonged to the Powhatan Confederation.

After two unsuccessful attempts to establish a settlement in this natural and excellent place for trade and traffic, the settlers finally got better luck. Around 1644, the newly built Fort Charles attracted more settlers as a safety factor. The community soon prospered as a trading post for fur , animal hides and tobacco .

The actual city was only founded in 1737 by Colonel William Byrd II . He had inherited the two parcels on the sides of the James River from his father and thus became Richmond's founding father . His friend William Mayo mapped Richmond and the first properties found their buyers.

Richmond was populated by a mere 250 residents in 1742 when it received its city ​​rights . The city ​​was sacked twice during the War of Independence . In 1788 it became the capital of Virginia instead of Williamsburg .

The Southern White House, seat of government of Jefferson Davis .

On December 18, 1811, the actress Elizabeth Poe died in a Richmond hotel, leaving behind two other children the two-year-old Edgar Poe , who was taken into the family of the tobacco dealer John Allan as a foster child. Richmond thus became the actual hometown of the poet, who kept coming back here.

After the War of Independence, the city recovered quickly and grew to around 100,000 inhabitants by the middle of the 19th century. It was considered the metropolis of the south and therefore replaced Montgomery as the capital of the Confederation in 1861 . In addition, the Tredegar Iron Works, the most important iron-producing company in the south, was located here . Equally exposed in terms of military strategy as Washington was, Richmond was fiercely contested during the years of the Civil War . As a result, the southern troops under General Lee surrendered only a week after the fall of the city on April 3, 1865. Richmond was almost completely destroyed by a devastating fire in the course of the siege. Allegedly, Union Confederate soldiers did not want to leave intact stocks of tobacco and weapons and therefore set the warehouses on fire. Richmond, like all of Virginia, took decades to recover from the political and economic collapse.

In 1888, when the first electric tram was set up in Richmond , the power supply developed by Frank Sprague was used for the first time , which helped electric trams to achieve a worldwide breakthrough. Because of its pantographs , the people called the railway the Broomstick-Train (Besenstielzug).

In the USA, private transport began to expand on a massive scale earlier than in Europe in the 1920s. The tram in Richmond, as in many other cities in the United States, was increasingly neglected. In 1949 the last tram was replaced by a bus line. In 1958, the first highway stretch from Virginia, the Richmond-Petersburg Turnpike , was finally completed, which crosses Richmond near the city center and immediately next to the old main railway station, Main Street Station . In the course of the further expansion of the Interstate Highways , the route became a section of Interstate 95 .

In 2004 , after about three decades of dilapidation and vacancy, Main Street Station was renovated and is now used again for (local and regional) rail traffic. The building, whose fate was uncertain to the last, is one of the oldest surviving station buildings in the USA. The rail traffic with the long-distance trains of the Amtrak has been (and will be for the time being) since 1975 via the suburban Staples Mill Road Station .

The metropolitan area of ​​Richmond generated an economic output of 80.7 billion US dollars in 2016, making it 42nd among the metropolitan areas of the United States. The unemployment rate in the metropolitan region was 3.0 percent and was thus below the national average of 3.8 percent (as of May 2018). The personal per capita income in 2016 was 51,685 dollars, which means that Richmond has an above-average income level.

Richmond is a major banking and financial center (seat of a Federal Reserve Bank ) and traditionally the seat of many law firms. The city is a reservoir for several companies in the US tobacco industry. These include the Altria Group and its subsidiary Philip Morris USA , as well as the raw tobacco dealer Universal Corporation . The US Smokeless Tobacco Company , now a subsidiary of Altria, is also based in Richmond. 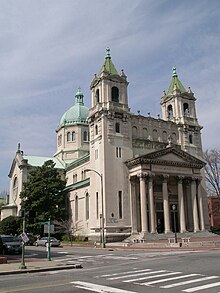 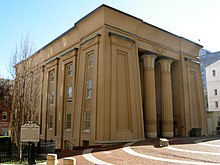 The National Park Service identifies 17 National Historic Landmarks for Richmond as of December 2016, including the Virginia State Capitol , the Egyptian Building , the Governor's Mansion and the James Monroe Tomb . 220 buildings and sites in the city are listed in the National Register of Historic Places (NRHP) (as of November 13, 2018). In addition, Richmond has a long history of wall painting . Murals on various (historical, social, political) topics can be found throughout the city center.