The title of this article is ambiguous. Further meanings are listed under City Center (disambiguation) . 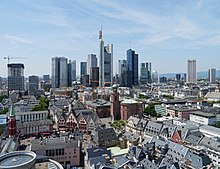 The Frankfurt city center with its high-rise buildings in the financial district and recovery of the old town (in the foreground, Dom-Roman Project , May 2017)

The inner city (in Switzerland in some places also inner city ) is the inner part of a city, also with emphasis on the function in the urban fabric called city or city ​​center , center , center or city ​​center , in which mostly all important traffic routes and supply routes converge or cross. Furthermore focus here trade , service facilities of the city and, depending on the status of the city, regional administrations , railway stations and bus stations (ZOB) - ie institutions in the tertiary sector. Because of the high land prices, there is a tendency towards building with high-rise buildings and high building density as well as a small residential population and a high number of commuters. A more precise delimitation can be made using the shop window index, the CBD height index and the CBD intensity index.

The inner city is also viewed in spatial sciences as a type of center (center type) and is typologically differentiated from other centers. According to this consideration, the inner city is usually understood to be a historically grown core of a city, to which, in the case of a center system, further centers (e.g. further inner cities or secondary or district centers, local supply centers, special or atypical centers) are assigned. As a rule, special features develop in a center system, which are classified according to a functional or hierarchical gradation.

Inner cities in Germany can develop very different characteristics depending on local and regional conditions. Inner cities are ideally the condensed old town cores of cities that have grown in historical dimensions. Most of the time, upper and middle class living in them, sometimes even living in general, has largely disappeared or pushed back to individual and peripheral locations or upper floors. As a rule, tertiary uses (shops, offices, public buildings) and traffic facilities dominate the image of inner cities. The inner city, inhabited by all social classes, whose important streets and squares shape the residential and commercial buildings of the upper and middle classes, is hardly to be found in Germany today. In the major German cities in particular, traffic, commercial and administrative uses have displaced living and transformed the formerly inhabited old town into the city's main business district.

At the same time, a decrease in the number of customer visits can be observed among businesses in some inner cities, including almost all Swiss inner cities. The president of the Swiss Association cities Kurt Fluri cites as causes of the shopping tourism and the online trading and encourages investments to revitalize the city.

Methods for delimiting the inner city from sub-centers

The shop window index is the percentage of the total length of all shop windows in a street or a block of the total length of all house fronts or streets. There are no generally valid limit values ​​that indicate the central function of an area - because of the strong regional differences in the type of development, it is difficult to compare inner cities with this index. In general, the proportion of shop window space increases the more modern the buildings are. However, it is possible to find relative boundaries within a region. Sometimes the shop window index shows that a new commercial city center has emerged within a city in addition to a historic city center.

"CBD" ( Central Business District ) is an English technical term that is also used in Germany as a synonym for inner city. The CBD height index is the ratio of all commercial floor areas of a building block to the building floor area. This term was introduced in the middle of the 20th century by the American geographers James E. Vance and RE Murphy , who studied town planning in depth.