Kienberg is a municipality in the district of Gösgen in the canton of Solothurn in Switzerland . 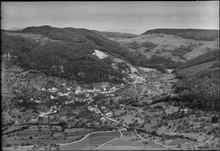 Kienberg lies at 549  m above sea level. M. , 11 km north-northeast of the city of Olten (linear distance). The farming village extends on the north side of the Solothurn Chain Jura in the valley of the Bruggbach, at the north foot of the Salhöhe . The north-eastern municipality of the canton of Solothurn only shares a border with the rest of the canton over a length of 100 m.

The area of ​​the 8.5 km² municipal area covers a section of the eastern Jura, which shows a great variety of landscapes. Geologically, Kienberg is located at the transition area from the unfolded and individual plaice of the Tabular Jura to the Folded Jurassic , which here has a complicated shed structure and was partially pushed onto the Table Jura. The community soil is drained by the Bruggbach , a left tributary of the Sissle . This stream rises on the northern slopes of the Geissflue , flows north through a narrow pass between Stellichopf ( 865  m above sea level ) and Räbnen ( 875  m above sea level ) and deepens below Kienberg with a valley in the layers of the Table Jura .

In the south, the border mostly runs along the main Jura ridge, the watershed between the Aare and Sissle catchment areas . This ridge is crossed from west to east by the Geissflue (on the eastern slope of which the highest point of Kienberg is reached at 915  m above sea level ), the Rotholz ( 860  m above sea level ) and the Salhöhe ( 779  m above sea level). ) educated. To the east of Kienberg, the height of the so-called castle shows a striking rock fall to the north. In 1997, 4% of the municipal area was accounted for by settlements, 45% by forests and woodlands and 51% by agriculture. The municipality of Kienberg is part of the Aargau Jura Park, a “Regional Nature Park of National Importance”.

Until the second half of the 20th century, Kienberg was a village dominated by agriculture . Even today arable farming , fruit growing (especially cherry trees) as well as cattle breeding and dairy farming have an important place in the income structure of the population. Further jobs are available in local small businesses and in the service sector, including in companies in the electrical industry, the construction industry and in a sawmill. The gypsum quarrying south of the village well into the 20th century has now ceased. In the last few decades the village has also developed into a residential community. Many employed people are therefore commuters who mainly work in the Aarau region.

The community is located off the major through axes on the road from Erlinsbach over the Salhöhe to Frick or to Sissach . The village is connected to the public transport network through a post bus course, which runs from Gelterkinden to Kienberg.

The place could have been inhabited for a long time, which is indicated by various archaeological finds. Between 1912 and 1921 Louis Jäggi (teacher in Kienberg) found two stone axes from the Neolithic age on the Mühlacker . No finds from the Bronze Age have been made in the municipality, but in the neighboring municipality of Wittnau am Wittnauerhorn, ceramics from this time and the remains of a mighty rampart built around 900 BC were found. Was built. An iron sword that was found in the middle of the 19th century comes from the Iron Age . In Anwil, a Celtic coin was found on the Bergmatt (500 meters from the border with Kienberg). Since the municipality was under the influence of the Roman Empire , it is assumed that one or more manors existed on the municipality at that time. However, so far none of this has been archaeologically confirmed, although Louis Jäggi discovered Roman bricks on the Behrten .

The grave finds on the Hirsacker and the bodies from the 7th century should be mentioned from the Alemannic period . The surviving place names and names also suggest that the present-day settlement came into being at the time of the Alemanni . During the excavation work in Hirsacker in 1835 , bricked graves were found. In a tomb with a limestone vault, a skeleton with a helmet, a battle sword and a dagger, a tumbler and a triangular coin were found. A rider's spur and a belt tongue with three rivet nails are also attributed to these excavations . In 1878 a double-edged long sword was found in a skeletal grave. Whether it came from the cemetery on Hirsacker or Leibern could no longer be traced.

Since the Middle Ages , Kienberg formed its own rule under the von Kienberg rulers, which was under the sovereignty of the House of Habsburg . After various pledges in the course of the 14th century, the village and its rule came to the Lords of Heidegg in 1398 . By purchase, the rule came to Solothurn against the will of the Austrians in 1523, as the last territorial expansion of the canton. The disputes could not be settled until 1532.

Under Solothurn rule, Kienberg was assigned to the Bailiwick of Gösgen and formed its own court district. After the collapse of the Ancien Régime (1798), the village belonged to the Solothurn administrative district during the Helvetic and from 1803 to the Gösgen district. During the 19th century, trimmings were widespread in a manner similar to that in the communities of the Basel area in Kienberg. 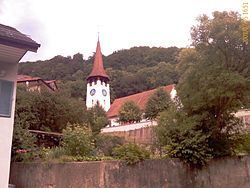 The parish church of the Assumption of Mary goes back to a church that was mentioned in 1276. The church was largely rebuilt between 1627 and 1635 in the early Baroque style. As part of a restoration in 1972, the former interior was restored in the classical style. The church was gently renovated inside and out in 2009. Some characteristic farmhouses from the 18th and 19th centuries have been preserved in the town center. In the municipal area of ​​Kienberg there are the two castle sites of the Heidegg ruins and the Alt-Kienberg ruins. The sinkholes above the old gypsum pit in the eastern part of the village are also remarkable.

In 1966 this coat of arms replaced a coat of arms that had existed since 1941 "In yellow on a green three-mountain black trunk with 4 cut branches, decorated with 3 red flames." Today's coat of arms is that of the old rule of Kienberg and corresponds to that of the Aargau community of Küttigen .

Political communities in the Gösgen district