Fruit plantation on Lake Constance near Arbon (plantation of the varieties Gala , Topaz and Golden Delicious )

The especially for the vitamin - and mineral supply important human fruit species were as wild fruits already several million years ago to the daily diet of collecting Urvorfahren of man. More than 50,000 years ago, raspberries , blueberries , elderberries , the fruits of mountain ash and sloe were part of the diet of migrating groups of people. These wild fruits have certainly not yet been cultivated systematically. In some areas, however, these berry fruits were cultivated very early. It is assumed that raspberries, elderberries and blueberries were harvested regularly as early as around 8000 BC in some forests or in simple gardens in Europe. Berries were already part of the regular diet of the North American natives back then. In Mesopotamia , on the Euphrates and Tigris , mulberries were very popular for thousands of years before Christ. The first beginnings of fruit growing in the Middle East can be traced back to the 4th millennium BC. After the transition to agriculture , fruit trees and bushes were planted regularly and in a targeted manner, and the fruits were harvested for consumption. In Mesopotamia , primarily fruit trees were planted to create parks and palace gardens.

In modern times, larger fruit-growing areas were created around the world, in which fruit was planted to supply nearby cities or for export. The main regions are: Austria ( Styria ), Italy ( South Tyrol ), France and in Germany the Alte Land near Hamburg, the Lake Constance area , the Voreifel and the foothills near Bonn (where the first pure fruit estate in Germany was founded by Otto Schmitz-Hübsch in 1896 ) . Depending on the region, these areas supply apples, cherries and plums, for example. Huge banana plantations emerged in Central America , which also influenced the political situation there, because US corporations had an interest in control over the land and in cheap labor. Lately, large quantities of fruit have been produced in South America, South Africa, New Zealand and Australia.

Origin of the fruit species (selection)

Homer's Odyssey , the heroic epic of ancient Greece (800 BC), in all of its extensive descriptions never depicts that fruit is eaten. And yet for the poet pears, pomegranates, apples, figs, olives and of course grapes make up a well-planned orchard that will produce fruit for a long time in the year (Odyssey 7,112):

In addition to the courtyard, there is a large garden near the courtyard door.
Four mornings, surrounded by a fence on all sides.
Large trees stand in lush growth,
apple trees with shiny fruits, garnets and pears
and also sweet figs and fresh, green olives.

Fruit never spoils for them, nor is it missing in winter or summer.
Throughout the year, but the constant western breath drives
some out and lets others ripen.
Pear on pear ripens there and apple on apple,
but also grape on grape and fig on fig.

King Laertes recognizes his son Odysseus , who is returning home after ten years of wandering, by the fact that Odysseus can remember the trees that his father once gave him (song 24): “For I accompanied you as a boy in the garden; we walked around under the trees, and you named and showed me everyone. You gave me thirteen trees with pears and ten full of reddish apples and forty fig trees ... "

Many types of fruit are not grown from seeds, but are propagated vegetatively by cuttings or cuttings .

With some types of fruit, shoots, so-called noble twigs, are grafted ( grafting ) from the desired varieties onto shoots of rootstock varieties that have certain properties ( rootstocks ). The reason for this can be different: Either, for example, the type of fruit cannot be propagated by cuttings, or one would like the type of rootstock to influence growth. You can only get weak trees (small crowns) by using certain types of rootstock. Depending on the type of fruit, certain refinement methods are suitable. 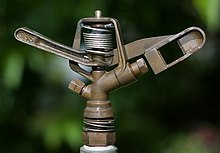 In areas with little precipitation, irrigation is the most important prerequisite for the economic success of fruit growing. In the south of the USA, South Africa, Australia and the Middle East, to name just a few examples, irrigation takes place regularly. The same applies to cultivation areas that are less rainy but dry in summer, such as in South Tyrol , France and other countries in southern Europe. In Germany, too, additional irrigation plays an important role, especially on light soils: fruit growing on sandy soils, as in the area around Werder / Havel ( Brandenburg ), is only yield reliable with sufficient irrigation. But it also deserves more attention than before on better soils when the distribution of precipitation becomes less favorable.

Irrigation systems are of particular importance. In many growing areas such as South Tyrol, orchards are particularly endangered by late frosts. Sprinkling systems are used for frost protection during the flowering period . The freezing process gives off enough heat to protect the organ to be protected (flower, young fruit) against cell death.

The pruning of fruit trees has, among other things, the task of giving the tree a certain shape (depending on the training system) and thus a good distribution of shoots. This influences the yield and quality. For organizational reasons, cutting measures mainly take place in winter (winter cut). By cutting measures in summer (summer or green cuttings), the shoot distribution (and thus the leaf and fruit distribution) is optimized.

The main purpose of cutting fruit bushes is to rejuvenate and keep the plants healthy. High quality fruits are mainly formed on younger shoots; old, worn shoots are less fertile and are often attacked by fungal diseases.

A number of diseases and pests can damage a wide variety of fruits. Through the use of targeted plant protection measures, damage to the organs of the plants and the fruits should be reduced.

The use of pesticides , which, as with all monocultures, is also common in fruit growing, is viewed critically . In addition to conventional fruit growing, there is also organic fruit growing today. In the last few years, integrated pest management has become more and more popular in fruit growing . The control of animal pests (caterpillars, lice, beetles and so on), in particular with the confusion method , is particularly successful here. Studies have repeatedly shown that apples from conventional agriculture , in contrast to apples from organic agriculture , are usually contaminated with several pesticides at the same time, regardless of integrated pest management.

More detailed information can be found in the articles on the individual types of fruit.