The blueberries ( Vaccinium ) are a genus of plants from the heather family (Ericaceae). The 450 to 500 species of Vaccinium are mainly found in the northern hemisphere . Some species are generally referred to as bilberries or blueberries in German, although the designation in the narrower sense only applies to the most common species in Europe, the bilberry ( Vaccinium myrtillus ).

The Vaccinium species grow as evergreen or deciduous, creeping, spreading, independently upright or climbing dwarf shrubs , shrubs or trees . Mostly they grow terrestrially, more rarely also epiphytically . The above-ground parts of the plant can be bald or hairy; The hairs ( trichomes ) are stalked or sessile, as well as glandular or non-glandular.

The alternate and spiral or very rarely pseudo-whorled leaves can be stalked. The membranous to leathery leaves are glabrous or hairy. The simple leaf blades are elliptical, egg-shaped, oblong-lanceolate or spatulate. The flat or bent back edge of the leaf is smooth or serrated.

The terminal or axillary, racemose inflorescences usually contain two to ten flowers; sometimes the flowers are solitary or in groups in the leaf axils. There are durable or soon perishable bracts available. Small bracts are only present in the Oxycoccus section . The flower stalks can be widened near the flower and they are usually articulated.

The hermaphrodite flowers are radial symmetry and rarely four or mostly fünfzählig double perianth (perianth). The rarely four or mostly five sepals are only fused at their base. The usually five, rarely four or six petals are usually fused together over almost their entire length in the shape of a ball, bell, urn or tube; seldom are they almost free. The colors of the petals range from mostly green, white to cream to pink and bronze, rarely they are red. The straight to back curved corolla lobes are usually shorter than the corolla tube. There are usually two, rarely one, circles with four or five stamens each, which usually do not protrude above the crown. The bald or hairy stamens are straight and flat. The anthers can have horns. The discus in ring shape. Four or five carpels are fused into a subordinate, four to five-chambered or mostly eight to ten pseudo- chambered ovary. There are many ovules . The scars are heady or inconspicuous and truncated.

The egg-shaped to spherical, fleshy berries are characteristic of the genus Vaccinium . The berries, red or blue when ripe, contain two to forty seeds. The relatively small, egg-shaped to ellipsoidal seeds have a net-like, hard or slimy seed coat (testa).

The basic chromosome number is x = 12. 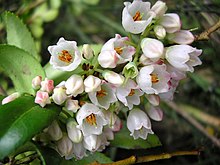 Most Vaccinium fruits are edible. There are a few varieties that are grown as soft fruit. The medicinal effects of some species have been studied.

The North American wild forms served the North American indigenous people, for example in the area of ​​today's US state Washington , as food. Drying areas were found that can only be recognized by rectangular depressions. Eleven of them were found in the Indian Heaven Wilderness in the Gifford Pinchot National Forest .

The Vaccinium species usually grow on nutrient-poor and acidic soils , mainly in heather and moorlands or in sparse forests . In the mountains they can be found in the subalpine and alpine altitude levels .

The genus Vaccinium was first published in 1753 by Carl von Linné in Species Plantarum , 1, pp. 349-352. Type species is Vaccinium uliginosum L. The botanical genus name Vaccinium possibly goes back to baccinium for berry bush and bácca for berry. The genus Vaccinium belongs to the tribe Vaccinieae in the subfamily of Vaccinioideae within the family of Ericaceae . Synonyms for Vaccinium L. are: Hornemannia Vahl , Hugeria Small , Neojunghuhnia Koord. , Oxycoccus Hill , Rigiolepis Hook. f. The genus Vaccinium includes cranberries, blueberries, bogberries and cranberries.

The genus Vaccinium is widespread mainly in the northern hemisphere . In tropical Asia, Central and South America, it is limited to the high mountains. Some species are found in Africa and Madagascar . 92 species occur in China , 51 of them only there. 25 species are native to North America.

The genus Vaccinium is divided into sub-genera and sections. It includes between 450 and 500 types (selection), depending on the opinion of the various processors: