This article deals with the biological term for the ovule as an organ of the seed plants, further meanings under ovule (disambiguation) .

Ovule of the Norway spruce

The ovule is the female reproductive organ of the seed plants . It is located in the angiosperms in the ovary , in the gymnosperms on the seed scale. From it the seed develops after fertilization .

The ovule was first described by Nehemiah Grew (1671). Grew found a small hole in the ovule's shell that reminded him of the bunghole on beer and wine kegs. He assumed that it also served to pass air through during fermentation . It was not until 1806 that Pierre Jean François Turpin correctly assigned this “micropyle” a function in fertilization. For a long time , the interior of the ovule appeared as a homogeneous tissue surrounded by one or more sheaths. In 1888 Eduard Strasburger was the first to describe the reduction in the number of chromosomes ( meiosis ) in cells in the ovule.

Position in the ovary

Depending on their orientation in the ovary, a distinction is made between upright, hanging and horizontal ovules.

Middle positions between upright and horizontal are referred to as ascending, and between horizontal and hanging as descending.

The ovules are exposed in the nude; in the Bedecktsamern they are enclosed in the ovary.

With the stem ( funiculus ) the ovule of which is placenta at the carpel attached. It usually has one or two (rarely three) shells, the integuments . Depending on the number of envelopes, one speaks of unitegmic , bitegmic or tritegmic ovules. Naked people basically have only one integument, most covered people two. The integuments enclose the actual mega sporangium , the nucellus . Ontogenetically , the nucellus is formed first. The integuments on the nucellus then grow upwards from below. In bitegmic species the inner arises before the outer. In the flowering plants, which are primarily bitegmic, the rarer form of a unitegmic ovule can arise in several ways:

In some parasitic plants the integuments are completely absent, for example in the Loranthaceae .

The point at which the ovule is connected to the funiculus is called the (outer) navel or hilum . The transition zone between funiculus and nucellus is called chalaza . On the side opposite the chalaza, where the integuments meet, they leave an opening free, the micropyle .

The often elongated fusion point of ovule and funiculus is called raphe (Greek final stress ραφή 'seam') and is noticeable in seeds from opposing ovules, it can be dorsal or ventral . Growths ( elaiosome , arillode) of raphe are referred to as strophiole (sprouts), outgrowths of the seed coat on the micropyle as caruncula , both usually also as "seed calluses". An obturator is a structure that facilitates the entry of the pollen tube into the egg cell. Morphologically, it usually arises in the placenta or the funiculus and grows into micropyle. 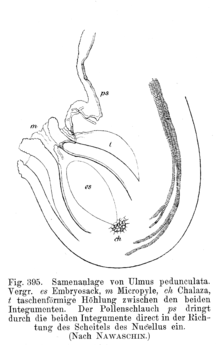 Ovule of an elm (bedecktsamer)

Depending on the location of the megaspore mother cell, the following types of ovules are distinguished:

In seed plants that are fertilized by spermatozoids ( cycadophyta , ginkgophyta ), there is a depression at the apical end of the nucellus called the “pollen chamber”.

Orientation of the ovule

Different orientations of the ovule

According to the orientation of the longitudinal axis, the ovules are divided as follows:

With opposing and crooked ovules a further distinction is made whether the micropyle to the bottom; apo-, hypotropic , the apex; epitropic or the flanks; pleurotropically facing. A more modern distinction is made between the different orientations of the curved ovules in relation to the carpel curvature; syntropic (in the same direction) and antitropic (in the opposite direction).

In the nucellus, a megaspore mother cell develops at the apical pole, here called the embryo sac mother cell. By meiosis arise from this diploid cell four haploid cells that Mega spores of which usually only one continues to develop as an embryo sac cell, while the rest perish. Usually they are arranged linearly, more rarely T-shaped. The megaspores of the naked species have a cell wall with sporopollenin , but not those of the covered species.

Embryo sac development in the genera Polygonum ("normal type") and Lilium . Triploid nuclei are shown as ellipses with three white dots. The first three schemes represent the meiotic divisions of the embryo sac mother cell, followed by 1 to 2 mitoses.

In the Nacktsamern the gametophyte is quite clearly developed and resembles the prothallium of the ferns. In all groups with the exception of Gnetum , Welwitschia and the Bedecktsamern, the embryo sac at the apical pole forms archegonia , the female reproductive organs. Ginkgo forms two or three archegonia per ovule, conifers up to 60 and Microcycas calocoma up to 100. An archegonium consists of an egg cell that can be up to six millimeters in size ( cycadopsida ) and a different number of neck wall cells . Cervical canal cells are always missing, sometimes an abdominal canal cell or at least an abdominal canal core is formed. In the Bedecktsamern the gametophyte is reduced to a mostly eight-nucleus embryo sac.

In the bedecktsamern the nucleus of the megaspore divides in most cases into three free nucleus divisions into two, four and finally eight cell nuclei. Three of these nuclei migrate to the upper or lower end of the embryo sac. There they surround themselves with their own plasma , then their own cell membrane and finally a thin cell wall . The three upper cells form the egg apparatus. The middle of the three is the much larger egg cell (Gynogamet, Oosphere), the other the two synergids (auxiliary cells). It is possible that the two synergids are homologous to the cervical canal cells of an archegonium . The three lower cells are the "antipodes".

The two middle cell nuclei do not separate from the embryo sac plasma and are called "pole nuclei". They fuse to form the secondary embryo sac core , which is therefore diploid. This happens before or after the pollen tube penetrates .

There are numerous deviations from this type of development, depending on whether one, two or all four megaspores are involved in the construction of the embryo sac, as well as how the embryo sac is further constructed. These types are named after the genus in which they were first described.