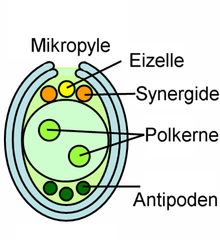 The structure of the embryo sac was first described by Wilhelm Hofmeister in 1849 . In 1851 he was the first to show that in seed plants, as in ferns and mosses, there is an alternation of sexual and asexual generations ( generation change ) and that the embryo sac corresponds to the female gametophyte of ferns and mosses ( homology ). Eduard Strasburger first described the exact course of development in 1879 for a bird knotweed ( Polygonum ).

In the embryo sac cell, free nucleus divisions ( mitoses ) take place without cell division , and only later do cell membranes and sometimes thin cell walls develop. The fully developed embryo sac then in the most common case (in most bedecktsamern ) consists of seven cells: the egg cell and two synergids , which together form the egg apparatus and are located at one end of the elongated embryo sac, furthermore from the large central cell and three antipodes at the other The End. The central cell initially contains two cell nuclei , which then fuse together to form a diploid nucleus. The egg cell is almost completely surrounded by the synergids, and the entire egg apparatus, with the exception of its connection to the wall of the embryo sac, is enclosed by the central cell.

During fertilization , the pollen grain forms a pollen tube that usually penetrates through the micropyle to the egg apparatus. There he releases two sperm cells, the male gametes, into one of the synergids. A sperm cell then fertilizes the egg cell, from which the zygote and from this the diploid embryo emerges. The other sperm cell fertilizes the diploid central cell, and from this the triploid endosperm emerges as nutrient tissue. This double fertilization is a peculiarity of the opaque ones, to which no parallel is known in other living beings.

In the naked-seed plants (Gymnospermae), to which our conifers , tropical cycads and ginkgo belong, the embryo sac is much larger and consists of numerous cells. This is the original evolutionary state. The tiny, few-cell embryo sacs of the bed covers are the result of an extreme reduction. This goes furthest with the evening primrose plants and the water lily plants , in which the antipodes are missing and the central cell only contains a haploid nucleus.

In addition to the normal case described above, there are many deviations in the development of the embryo sac in bedspreads. This already begins with the preceding meiosis. This usually gives rise to four daughter cells lying in a row, three of which perish and the remaining one as an embryo sac cell develops into an embryo sac. In some specimens, however, cell division does not take place after the second meiotic nucleus division (meiosis II), and two daughter cells each have two nuclei, one of which disappears and the other becomes an embryo sac. In the extreme case, no cell division takes place even after meiosis I, and a four- nucleus coenocyte results , which can further develop in a variety of ways. For example, in the case of lilies, during the first nucleus division (mitosis) after the two meiotic divisions, three nucleus division spindles unite , and two triploid daughter nuclei arise (see Fig.). The evening primrose already mentioned shows another special case : After meiosis, only the uppermost of the four cells continues to develop - in reverse of the conditions in the normal type (polygonum) - and after only two mitoses only a haploid nucleus becomes in the central cell in addition to the egg apparatus laid out, while antipodes are absent.

Among the components of the embryo sac, the antipodes show the greatest variability. In many cases they die off soon, but in other cases they develop a lively metabolism and seem to be involved in supplying the central cell with nutrients. In grasses they multiply up to almost a hundred cells. The synergids have an essential function in fertilization ( siphonogamy ), and it is assumed that they secrete substances that attract the pollen tube ( chemotropism ). In some plants ( lead root plants ) they are missing, however, and their functions are taken over by the egg cell.