The evening primrose family (Onagraceae) are a family of plants within the order of the myrtle-like (Myrtales). Oenothera species are important test plants in genetics . Fuchsia species and their varieties in particular are ornamental plants . 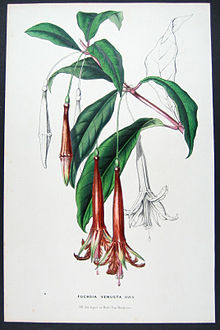 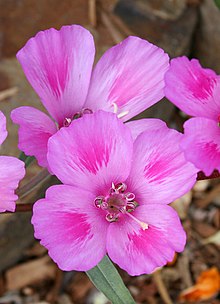 They are mostly annual, perennial or herbaceous plants or bushes , rarely trees with heights of up to 30 meters.

The leaves are alternate and screwy, opposite or whorled. The leaf blades are usually simple or rarely pinnate. The leaf margin is smooth to toothed. Stipules are missing or present.

The flowers stand alone or in racemose , panicle or spike-like inflorescences .

The flowers are mostly hermaphroditic; in Fuchsia there are also unisexual flowers, there are then dioecious, separate-sexed ( diocesan ) species. The flowers are usually radial symmetry , rarely zygomorphic , usually fourfold (except with Ludwigia , two to siebenzählig) with double perianth (perianth). The four sepals are fused and are green or colored. The four petals are free or rarely absent; they are nailed at times. In the bud position they are mostly left-covering. There are two circles with four stamens each. Most of the four carpels are fused to form a subordinate, syncarpic, four- chamber ovary. Each ovary chamber contains one to numerous anatropic, bitegmic ovules in a central-angled placentation. The stylus has a four-lobed, clubbed or spherical scar. The conspicuous flower cup (hypanthium) can be considered a specialty in the family . This is a tube formed from the calyx that extends the flower organs beyond the ovary below; as a result, the flower seems to have a stalk between the ovary and the other parts (missing in Ludwigia ). The nectar-exuding disc sits at the base of the hypanthium.
The flower formula is:

Mostly columnar capsule fruits are formed. There are also nuts ( gaura ) or berries ( fuchsia ). The fruits contain two to a hundred seeds. The small, smooth or variously sculpted seeds contain no endosperm and have a straight, oil-containing embryo; they rarely have a wing or a tuft of hair (coma).

The species of the northern hemisphere are mostly pollinated by moths ( entomophilia ); in the case of the genus Fuchsia , however, pollination is mostly carried out by birds: hummingbirds ( ornithophilia ). wind pollination ( anemophilia ) also occurs. 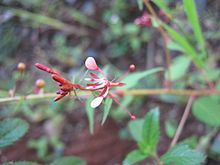 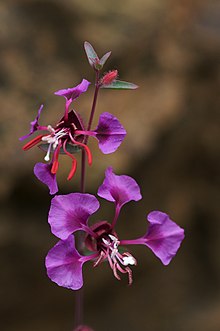 This family has been through in 1789 Antoine Laurent de Jussieu under the name "Onagrae" in Genera plantarum , S. 317-318 first published . The type genus is Onagra Mill. , Today a synonym of Oenothera L. The botanical name Onagra is derived from the Greek words onos for donkey and agra for hunting. Synonyms for Onagraceae Juss. are: Circaeaceae Bercht. & J. Presl , Epilobiaceae Vent. , Jussiaeaceae Martinov , Oenotheraceae CCRobin .

The species of the family Onagraceae have their areas in the temperate latitudes of the earth, for example in large parts of Europe, but especially many taxa in North America . In addition, they occur in the subtropics to the tropics. Actually, they are only missing in the desert regions of Australia and Africa .

The evening primrose family (Onagraceae) is divided into two subfamilies and six tribes with a total of 17 to 24 genera and around 650 species: