Ornithophilia is the name given to the adaptation of flowers , the bird flowers , to pollination by birds . This form of pollination occurs mainly in the tropics and subtropics and occurs in most animal-pollinated plant families in the tropics. The numerically largest families of flower birds are the hummingbirds in the New World and the nectar birds and honey eaters in the Old World.

In plants, the adaptation manifests itself in the following bird flower syndrome:

The flower birds have a narrow, long, straight or curved beak. The tongue is deeply split, trough-shaped or tubular, its end is often brush-shaped or fringed. The nectar intake and pollination takes place in flight or you need a seat on parts of the flower, leaves or twigs. The pollen is usually transmitted on the head, less often on the beak or on the feet.

A special feature was at the South American tanagers ( passerines observed), the flowers of the genus Axinaea ( melastomataceae visit). These birds do not drink nectar, but instead eat parts of the stamens of the flowers. As a result, they activate a "bellows organ" in the stamen, with the result that their head is dusted by a pollen cloud. Visited a bird then to eat for another Stamen another bloom that adhering to it pollen come with the blossom scar in contact so that pollination comes about.

In America there are several families of birds that are flower birds: 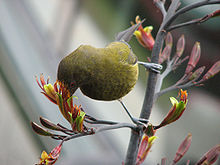 The nectar birds (Nectariniidae) in Africa, South Asia and Australia and the honeyeater (Meliphagidae) in Australia in the Pacific islands are the most important flower birds of the Old World. In Africa they pollinate the bird of paradise ( Strelitzia reginae ) and red-flowering aloe species. In tropical China, nectar and sunbirds pollinate ancient Hamamelidaceae (witch hazel family), and honey-eaters pollinate many Proteacees in Australia such as the species-rich genera Banksia and Grevillea , as well as the myrtle family (Myrtaceae). These have brush flowers, which are also visited by climbing marsupials. Callistemon and Melaleuca, for example, have cylinder brushes. The shaving brush flowers of Eucalyptus are pollinated by the brush-tongued parrots ( Trichoglossidae ). The spectacled birds (Zosteropidae) pollinate mainly Leptospermum and Acacia ( Acacia ). The Indomalay and Australian flower picks (Dicaeidae) pollinate Bauhinia , the panther birds (Pardalotidae) eucalyptus and acacias. The hawk birds endemic to Hawaii (Drepanididae) are closely tied to the likewise endemic lobelia ( Lobelia ).

There are no flower birds in Europe and North Africa. In the Canary Islands, however, there are two plant species with bird flower syndrome: Canary bellflower ( Canarina canariensis ) and Canarian foxglove ( Isoplexis canariensis ), but no designated flower birds. The two species are considered relics of the tertiary laurel forest, the original pollinators are likely to have died out during the ice ages. This ecological niche was filled with the Canary Bellflower by a subspecies of the Chiffchaff ( Phylloscopus collybita canariensis ) and a blackcap ( Sylvia conspicillata orbitalis ), with the Canary Foxglove by the Velvet Warbler ( Sylvia melanocephala leucogastre ).

In May 2014, scientists from the Senckenberg Research Institute published a description of the fossil bird Pumiliornis tessellatus from the Messel pit , in whose well-preserved stomach contents large amounts of different flowering plant pollen were detected. The skeletal anatomy of the 47-million-year-old bird allows the conclusion that it was a nectar-sucking animal and that the pollen did not get into the stomach in any other way. The find is therefore the oldest evidence of ornithophilia to date. The next most recent evidence of fossil pollinators comes from the early Oligocene and is around 30 million years old.