The myrtle family (Myrtaceae) form a plant family in the order of the myrtle-like (Myrtales). The family is divided into two subfamilies and some tribes ; in total it comprises about 131 genera with about 4620 species . They are mainly native to Australia (about 85 genera) and the Neotropics .

In addition to the name-giving myrtle , the myrtle family (Myrtaceae) includes plant species such as the clove and the eucalyptus species. Many types supply essential oils for perfumery and pharmaceuticals. Some species provide edible fruits, some Psidium species (for example the guava ) and Campomanesia and Eugenia species.

The plant species in this family are mostly evergreen (some eucalyptus species are deciduous) woody plants: trees and shrubs . They are helophytic to xerophytic . They usually contain plenty of essential oils in schizolysigenic extract containers. The secondary growth in thickness is based on a conventional cambium ring . The clearest distinguishing feature of this family, however, is that the phloem is located within the xylem , with all other plants this is the other way around. They have bicollateral vascular bundles .

The mostly opposite, less often alternating and spiral or whorled arranged leaves have a very different size and shape depending on the species and they can be stalked. The simple leaf blade is leathery to herbaceous and has entire margins. The leaf surfaces can be dotted with glands. The sheets can be oriented normally or rotated 90 degrees. The stomata are usually only on one leaf surface or, if the leaves are vertical, on both leaf surfaces and are usually anomocytic or, less often, paracytic. Many species have heterophyllia . Stipules absent or only small (eg Calythrix ).

The flowers are rarely alone or usually in a terminal, pendant, or between the nodes standing (well at Beaufortia - Callistemon - and Melaleuca TYPES) zymöse , spiked , schirmrispige , panicles or little head shaped (eg Actinodium ) inflorescences together. It can bracts be present. In some species the inflorescences act with their bracts as pseudanthia . There are often two bracts under the flowers . The plants are seldom dioeciously dioecious ( diocesan ) or polygamomonözisch .

Their rarely unisexual or mostly hermaphroditic, mostly radial symmetry , rarely somewhat zygomorphic (mostly only affects the Androeceum ) flowers are usually four, less often five-fold. There is often a cup-shaped or tube-shaped deepened flower base (= hypanthium ). There are usually four or five (three to six), free or overgrown sepals or they are only rudimentary to be recognized. The four or five petals are free or fused. The colors of the petals range from white to yellow, or from red to pink to purple, but there is no blue. As a rule, there are very many (20 to 150) free stamens present, more rarely four or five, eight or ten; they are mostly on the edge of the hypanthium. The stamens can all be fertile or partially converted to staminodes . The stamens can be fused into bundles ( e.g. Lophostemon ) and rarely have appendages ( e.g. Corynanthera ). The pollen grains usually have three (two to four) apertures and are rarely colpate, mostly colporat or porat, sometimes syncolpat. There may be a discus. Usually two to five, rarely up to 16 carpels are a syncarp, medium- and under constant, rarely almost Upper permanent, usually two to five (one to 16) kammerigen ovary grown. Single-chamber ovaries can contain 30 to 150 ovules , otherwise each ovary chamber contains 2 to 50 ovules; they are hemianatropic to anatropic and mostly bitegmic and crassinucellate. Each flower contains only one stylus with a scar. The pollination is done by insects ( Entomophilie ) or birds ( ornithophily ).

The fleshy or dry fruits that open or remain closed when ripe can be capsule fruits , stone fruits , nuts or berries . The seeds do not contain endosperm and can be winged (in some Eucalyptus species) or wingless. The embryo is straight to more or less curved, sometimes twisted. Frequent polyembryonies have been reported.

Tribus Eucalypteae: branch with leaves and inflorescences of Corymbia calophylla 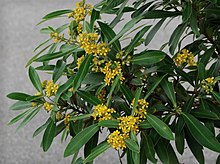 Tribus Kanieae: branch with leaves and flowers of Tristaniopsis laurina

Tribe Leptospermeae: branch with leaves and flowers of Kunzea baxteri 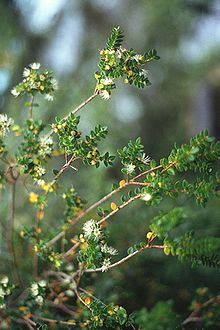 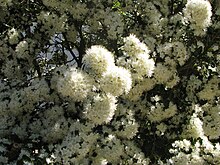 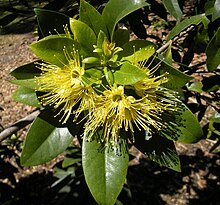 The myrtle family (Myrtaceae) has been known since Wilson et al. 2005 divided into two subfamilies and about 17 tribes and comprises about 131 to 138 genera with a total of about 4620 species :

The asteroid (9203) Myrtus is named after the Myrtaceae.