The mallow family (Malvaceae) are a family in the order of the mallow-like (Malvales) within the flowering plants . The family is now divided into nine subfamilies with around 243 genera and contains around 4,225 to 4,300 species. The Malvaceae have a worldwide distribution. The best- known crops are marshmallow , cocoa tree and cotton . This family includes some types that are used medicinally or for teas . Many species and especially their varieties are ornamental plants for parks, gardens and spaces. 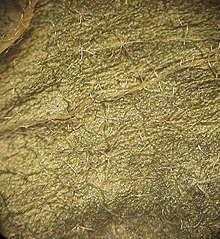 There are herbaceous plants : annual to perennial and woody plants: shrubs and trees , very rarely lianas . In the woody species, the bark is fibrous. The mallow family often have mucous cells. There is usually hair on many parts of the plant, it is usually star hair. Thorns or thorns are seldom present. There may be extra-floral nectaries .

The mostly alternate leaves are petiolate. The finger-veined leaf blade is palmate, lobed to divided or undivided. The leaf margin is smooth, notched, serrated or serrated; if it is not smooth, one leaf vein ends per tooth. There are stipules present, very rarely they are reduced.

Species whose flowers are monoecious ( monoecious ) or dioecious ( dioecious ) are seperate. The flowers are arranged in lateral, differently structured, often zymous inflorescences or the inflorescences are reduced to one flower. Cauliflora occurs in some tropical species (well-known example of the cocoa tree ( Theobroma cacao )). Sometimes a few bracts stand together or there is a sub-calyx of mostly three, rarely more bracts, in many genera.

The mostly stalked flowers are typically radially symmetrical , rarely somewhat zygomorphic ( e.g. Helicteres ) or asymmetrical ( e.g. Mansonia ). The five-fold flowers are rarely unisexual, mostly hermaphroditic with a double perianth . The usually five sepals are often fused at their base and only touch (valvat) in the rest of the area. The mostly five largely free petals overlap twisted (contort). In some species the petals are reduced or absent. In some species, the base of the stamens is fused with the petals.

Flower detail of Hibiscus moscheutos : The stamens have grown together to form a tubular columna , typical of Malvoideae

In the Malvaceae family, originally only the inner circle with five stamens is present. In many taxa , a special feature of the flowers is a so-called secondary multiplicity of stamens (up to over 1000), with the members of the inner circle increased centripetally, resulting in five groups of stamens. Often staminodes are present. The stamens are fused at least at their base. In the subfamilies Bombacoideae and Malvoideae , the stamens of the many stamens have grown together to form a tube surrounding the pistil , the so-called Columna . Numerous representatives of the subfamilies Grewioideae , Helicteroideae and Sterculioideae have an androgynophore that lifts the stamens and gynoeceum out of the flower. The pollen are different in the subfamilies. Two to many upper constant carpels are free or at a ovary grown. The style ends in a cephalic or often five-lobed scar. In the flowers there are nectaries , which consist of gathered glandular hairs and are usually located on the sepals.

Pollination takes place in many taxa by insects ( entomophilia ), some taxa, especially in the New World, specialize in birds ( ornithophilia ).

The Malvaceae has a wide range of fruit types. Usually capsule fruits or split fruits are formed, more rarely berries , stone fruits or nuts . Many fruits contain hair. In some species, the fruits have hairs or spines on the surface.

The seeds can have hair (known from cotton), wings or an aril (for example Durio ).

With the taxa with capsule fruits the seeds are the distribution units ( diaspores ); otherwise the fruits are mostly the diaspores. They are mainly spread by wind (known from Tilia , Anemochorie ) or animals, rarely by water; of myrmecochory is rarely reported.

The family name Malvaceae was first published in 1789 by Antoine-Laurent de Jussieu in Genera Plantarum , 271. The type genus is Malva L.

Molecular genetic studies in particular led to major changes in the systematics of the Malvales order . Some taxa were newly incorporated into the Malvaceae family, including the former families of the linden family , the woolly tree family and the sterculia family . These newly arranged former families are now only subfamilies. Most of the taxa that formed the previous family of Mallowaceae are now found in the subfamily Malvoideae; hence the term "mallow family in the narrower sense". The family is now divided into nine subfamilies. 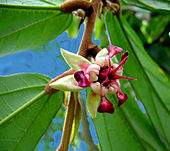 Subfamily Byttnerioideae: Flower of Theobroma grandiflorum with only five stamens 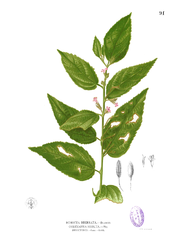 Subfamily Malvoideae : Beerenmalve ( Malvaviscus arboreus ): In the heyday of the many stamens are fused into a tube, which is typical of Malvoideae 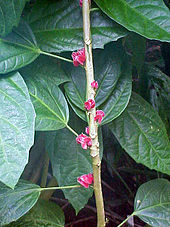 Subfamily Malvoideae: Goethea cauliflora (probably in the genus Pavonia ), tropical species that develops its flowers directly on the trunk ( cauliflora )

Subfamilies and some important genera

The Malvaceae family is now divided into nine subfamilies with about 243 genera and contains about 4225 to 4300 species. (If there is an article on the subfamily, then this information about tribe and genera can be found there):

Many species and especially their varieties are ornamental plants for parks, gardens and spaces. The most commonly cultivated species is the Chinese rose hibiscus ( Hibiscus rosa-sinensis ) with hundreds of varieties, which is important in parks and gardens in frost-free areas, but is also used as a houseplant. Cup mallow , hollyhock and many more can be found in the temperate latitudes in the gardens. Some tree species are planted in parks and avenues in the tropics.

There are a multitude of species that are widely used by humans. The cocoa tree is known as a useful plant . Okra ( Abelmoschus esculentus ) is a vegetable. The fruits and leaves of the African baobab tree are edible. The durian fruit is known.

This family includes several types that are used for teas . The medicinal effect of many species is mainly based on the mucus they contain. Also known colas ( Coke ). The wild mallow , also called "large cheese poplar", is one of the oldest known vegetable and medicinal plants .