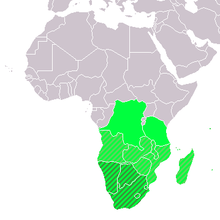 Southern Africa ( delimitation according to the UN statistics department )

The use of the term is by no means uniform within the United Nations.