Gaborone is located in southeast Botswana on the Notwane River and is the largest town in the South East District - but the city is self-governing. The city is around 1,000 meters above sea level. In the southwest of Gaborone are the 1,287 meter high Kgale Hills. Otherwise the landscape around Gaborone is largely flat.

The city center is laid out as a semicircle, with the government district forming the center, from which streets radiate eastwards. The mall , a spacious pedestrian zone, forms the main axis. In addition to the city center, which has about a third of the city's area, there are the districts of Gaborone West in the west, Broadhurst North in the north, Broadhurst South south of it and Village in the southeast. To the south is the Gaborone Dam , a reservoir on the Notwane.

At times the city was considered one of the fastest growing cities on earth. 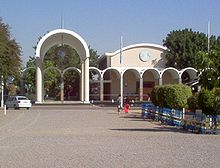 The arcaded entrance to the Botswana Parliament building

The city was founded in 1890 by the head of the Batlokwa , Kgosi Gaborone. The city ​​was named Gaberones by the British colonial authorities. In 1965 the seat of government of what was then Bechuanaland came from the South African Mafikeng (now Mahikeng) to Gaberones. This marked the beginning of the expansion of the city, which at that time only had around 1,000 inhabitants. In 1966 what was then Gaberones became the capital of the now independent Botswana. Since 1969 the city has been called Gaborone.

In the 1980s, several raids by the South African army took place on exiled members of the ANC . 15 people died.

One of the sights of Gaborone is the National Museum, founded in 1968, with an art gallery . Ethnographic and archaeological exhibits of Botswana are shown there and works by contemporary artists are exhibited.

The function as the capital of an economically successful country ensured economic growth.

Gaborone is the headquarters of the University of Botswana , which was founded in 1982. For a long time it was the only university in the country. The Gaborone campus is located between the city center and the Village district.

The Southern African Development Community ( Southern Africa Development Community , SADC) has its headquarters in Gaborone. This organization was founded in 1980 to promote economic cooperation between its member states and to reduce dependence on South Africa. After the end of apartheid in this country, South Africa is also a member of the community.

In the 1990s, the Swedish Motor Corporation and Motor Company of Botswana were the only automobile manufacturers to be based in the city.

Gaborone is situated on the railway line from Cape Town to Harare . Passenger traffic in Botswana ceased in 2009, but resumed in 2016. North of the city is Sir Seretse Khama International Airport . Highways run parallel to the railway line north to Francistown and south to Lobatse and Mahikeng. Other highways lead via a border crossing to Zeerust in neighboring South Africa and on Botswana territory to Molepolole and the Kalahari .

In a ranking of cities according to their quality of life, Gaborone was ranked 141st out of 231 cities worldwide in 2018.

The Notwane FC is a successful football club from Gaborone, which has already qualified several times for African Cup competitions. He plays his games in the 22,500-seat National Stadium ("National Stadium ").

A number of crime novels by the Scotsman Alexander McCall Smith , which have also been translated into German, are set in Gaborone. They were also filmed as a television series. The focus is on the fictional first female private investigator in Botswana, Mma Precious Ramotswe.