This article deals with the place Västerås; for the Swedish municipality of Västerås, see Västerås (municipality) . 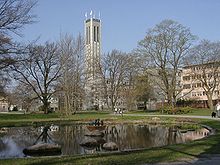 Västerås is located on the Mälaren bay , about 100 km west of Stockholm .

The Hornåsen burial ground on the Rytterne Horn in Västerås is a few kilometers south of Borgåsund. A trading center called Aros was founded as early as the Viking Age . In 1120 Västerås became a bishopric.

In the run-up to the Danish-Swedish War , the city had been contested since 1468. On April 29, 1521, the Dalekarlier triumphed over Denmark under Gustav I. Wasa . Several diets were held in Västerås, of which those of 1527 and 1544 were the most significant. In 1527 Gustav I. Wasa ended the power of the hierarchy and introduced Protestant teaching in Sweden , in 1544 he made the crown hereditary in his family.

In the car-free center is the old town center Kyrkbacken , which contrasts with the modern town house with its tower. To the south of this is Västerås Cathedral , where King Erik XIV is buried. When the king's coffin was opened in the 1970s, his legs were found sawed off next to his torso. Scientists justify this with the fact that the noble stone coffin was too short and conversion was impossible. The town's castle is now the seat of the regional government.

In addition to the important prehistoric burial site Anundshög , the open-air museum in the Vallby district is also worthwhile.

In addition to the city ​​castle, there are several castles in the vicinity that can be visited, including Ängsö Castle and Tidö Castle with an oak named after the previous owner Axel Oxenstierna .

The area around Västerås is popular with cyclists and hikers. The network of cycle paths is extremely well developed both inside and outside the city. The Årby burial ground is west of Västerås.

Power Big Meet is an event for American automobiles, in the last few years more than 14,000 vehicles have been seen over the 3 days. Västerås is internationally known toowners and friends of historic American automobiles for the world's largest car festival with American cars. The meeting is always in the first week of July from Thursday to Saturday. Highlights include cruising through the city on Friday and Saturday evenings.

As an industrial city, Västerås is the place of origin and original location of the ASEA company , which was founded in the 1980s with Brown, Boveri & Cie. merged and since then has been called ABB . The city's economic dependence on this company is gradually dissolving as it develops into a university city. The city's central location makes it a transport hub. In 1947, H&M , the fashion chain now based in Stockholm, was opened in Västerås .

The main employers of the city of Västerås (September 2005):

Västerås is the 100 km eastern Swedish capital Stockholm via the direct railway line Stockholm-Örebro and on the highway E18 connected. On the eastern outskirts of Västerås is the airport called Stockholm - Västerås Airport , from which both charter and scheduled flights depart.

The writer Lars Gustafsson was born here in 1936. The poet and Nobel Prize winner Tomas Tranströmer had been a citizen of the city since 1965. In 1997, the Tranström Prize for Literature was awarded here in his honor .

In 1969 the journalist Sture Källberg published the interview volume Rapport från medelsvensk stad: Västerås . The book marked the beginning of a wave of documentary books by the Swedish rapportskolan , the “reports school”, in which people spoke about their lives in society. Källberg's book was published in 1971 in German as a report from a town in central Sweden : Västerås and in 1972 in English.

Two kilometers north of the city is the Vallby Open Air Museum, a large open-air museum.

Västerås has been the bishopric of the Church of Sweden since the 12th century .

In the inner city there is an area called Rocklunda , on which there are numerous sports facilities. For example, a riding hall , a multipurpose hall, a hockey - and Innebandyhalle and a motor racing circuit. The Solid Park Arena football stadium (formerly known as Swedbank Park ), where the footballers from Västerås SK play their home games, is also on Rocklunda. The club's bandy department is the Swedish record champion in this sport with 17 championship titles.

In addition, there are hiking trails and cross-country skiing trails in the urban area . With its marina right in the center, the city also offers good conditions for sailors. Stockholm can be reached via Lake Mälaren. The Arosvallen athletics stadium is close to the university . In 2006 the World Championships in rubber boot throwing took place here.

→ Main article : List of personalities from the city of Västerås

Västerås is a twin city of the towns

Places in the municipality of Västerås