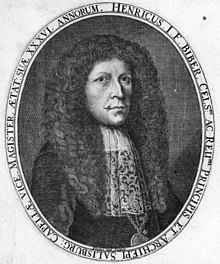 Heinrich Ignaz Franz Biber , from 1690 Biber von Bibern , (baptized August 12, 1644 in Wartenberg , Bohemia as Hennericus Pieber ; † May 3, 1704 in Salzburg ) was a Bohemian composer and famous violinist of the Baroque period .

Heinrich Ignaz Franz Biber was in a Jesuit high school in Silesian Opava his musical education. Here he had contact with the trumpeter and later conductor of the Archbishop in Kremsier Pavel Josef Vejvanovský . Presumably he took further lessons with Johann Heinrich Schmelzer or the court conductor Antonio Bertali in Vienna, but this is not considered certain. His first known composition dates from 1663, a Salve Regina for soprano, violin, viol and organ [C. 49].

He got his first job in 1668 as a musician in the court orchestra and valet of the Olomouc bishop Karl II of Liechtenstein-Kastelkorn . He did not return from a trip to Innsbruck without permission. On this trip he came into contact with the violin maker Jakobus Stainer, famous at the time , who later mentioned him in a letter as "the excellent virtuoso Mr. Biber".

From 1670 he entered the service of Archbishop Max Gandolf von Kuenburg in Salzburg. In 1678 he received the position of Vice Kapellmeister and after the death of his predecessor Andreas Hofer around 1684 that of Kapellmeister. He was considered a brilliant violin virtuoso; Emperor Leopold I awarded him a title of nobility ( Truchsess ) for his compositional work in 1690 . From then on he was allowed to call himself “beaver of beavers”, which meant a considerable social advancement. His monthly income at that time was 60 guilders, with free accommodation, wine, bread and firewood.

In many of its early work used the beaver Scordatura to achieve (retuning of individual strings) to the other sound effects, and to difficult grips in the lower positions to allow and to empty strings.

Biber wrote masses , two requiums , numerous violin sonatas and table music . His most monumental work was created in 1682 on the occasion of the 1100th anniversary of the Archbishopric of Salzburg, a mass with 53 voices, the Missa Salisburgensis and the hymn Plaudite tympana . This mass was previously ascribed to Orazio Benevoli . In the 1970s, it was assumed that Biber's predecessor, Andreas Hofer, might also be the creator of the work. Biber has been considered the composer since 1975. Most of his spiritual works are virtually unknown. Only Chi la dura la vince remains from his operas .

Few violinists and composers before his time found double stops, three and four chords as often as with Biber. At that time he seldom mastered the violin up to the seventh position.

(Contains all works, insofar as music or text are preserved, works of ambiguous attribution only insofar as Chafe, Sehnal or Nettl consider them to be such beavers.)

With considerable arguments, Brewer takes the view that the composer is Johann Heinrich Schmelzer . The author of the booklet for the CD Heinrich Ignaz Franz von Biber / Imitatio des Ricercar Consort agrees without any reasons.

Made between 1678 and 1687; the manuscript is in the Bavarian State Library.

With the exception of the first and last sonatas, all sonatas can be played on a chorded violin ; the individual tunings are shown in the following illustration.

In the 11th sonata, the two middle strings in the pegbox and between the bridge and tailpiece are swapped so that a cross becomes visible.

The sonatas are divided into three groups of five: 1. The joyful, 2. The painful, 3. The glorious rosary; Then there is Sonata XVI, which thematically does not belong to the Rosary.
In detail (sentence names after the handwriting):

Battalia (Suite) in D major [C. 61] (a battle painting ) (Presto I - The dissolute company of allerley Humor Allegro - Presto II - Mars - Presto III - Aria - The battle - Lamento Adagio).
The autograph is entitled:
“Battalia / The dissolute swarming of the Musquetirer / Mars / the battle, and Lamento / of the wounded, with arias / imitated. and Baccho dedicirt / Von H. Biber, Ao 1673. / à 10 / 3rd violin / 4 viol. / 2 violon / 1 harpsichord. ”
And the notes:
“ NB. Where the line is [music example follows] / one has to tap the violin with the bow instead of the violin / it must be tried out, Mars / is already known, but I am not angry with him / know how to change where they are Druml goes in the bass, you have to make a piece of paper on the sides that there is a strepitum [noise, din], but only alone in Mars ”
“ NB: The battle does not have to be played with the bow, but the string with the right hand fast like the stuck . Undt starck! "In
the dissonant 2nd movement:
" hic dissonant ubique, nam ebrii sic diversis cantilenis clamare solent "so:" It's dissonant everywhere, because the drunks tend to roar so different old songs. "
At the end of the harpsichord part:" That was copied in eyl “
The second sentence is out of the ordinary because it has 10 voices (the rest consistently 5 voices). Biber quotes several melodies that were popular at the time, which soon results in a jarring "pathological" Quodlibet. The following are identified:
1) Song Ne takes mý mluwel from the Slovak Codex Vietoris (1660–1670);
2) Song Vojanský Figator from Bohemia (18th century);
3) Törökös , Turkish dance from Hungary (18th century), known from La rencontre imprévu by Gluck / Opern (number 33) (1764);
4) Bergamasca , widespread in Europe since the 16th century, also known in Germany under the title Kraut und Rüben have driven me away and quoted by Bach in the Goldberg Variations in Quodlibet ; 5) Song “Nambli wol can I believe ietz” by Johann Jacob Prinner

German "Sonatas, useful for altars as well as for stately courts", for 6 to 8 instruments, 1676

in C major 1673 for 2 violins, 2 violas, violone and harpsichord [C. 75]: Serenada - Allamanda - Aria - Ciacona (without continuo, but singing voice for bass, who sings the call of the night watchman: “Lost you, Mr. Undt, let me tell you, the hammer has hit Neyne (tens), Hüets Feyer, goodbye And praise God the Lord and Our Lady! ”) - Gavotte - Retirada.

Biber's instructions for the performance: “The Serenada, Allamanda, Aria, Gavotte, Retirada are all not repeated ((with Otto:“ are repeated 2 times ”)) from the beginning like other ballets one is used to reproduce. But well occupied, especially the viola brazza 2 ((= viola 2)) which mostly carries out the foundation ((Otto: "most leads")). In the Ciacona, the night watchman finds out how to call the clock here now. And the other instruments are all played without a bow, as on the lute in the gavotte, it comes out nicely, namely the violins under the arms. "

in C major 1673 [C. 113] for 8 trumpets, kettledrum, basso continuo and violone. Written for the inauguration of Polycarp von Kuenburg (also: Khuenburg) as provost of Salzburg Cathedral on January 13th, or on the occasion of his appointment as Bishop of Gurk in Carinthia on April 2nd, 1673. The manuscript contains the following performance instructions: “NB das Tromba 1. et 2. also 5. and 6. all four must stand together. Undt Tromba 3rd, 4th, 7th, 8th also together, because they go to Tripla ad duos choros. The violon and the bass continuus, however, have to be played as much as possible, the quartuba may well be needed. "

for solo violin and basso continuo; the piece is partly an earlier version of Sonata IV of the Sonatae Violino Solo [C. 141], so requires the same scordature (a, e ', a', d ")

for solo violin and basso continuo (No. 79 of manuscript 726 in the Minorite Convent Vienna). The last sentence is based on the song “Nambli wol can I believe ietz” by Johann Jacob Prinner , which Biber also uses in “Battalia”. They are closely related to a Pastorella by Johann Heinrich Schmelzer .