Listen to the city ​​and town of Akureyri [ 'aːkʏˌrɛiˑrɪ ] ? / i is the fourth largest city in Iceland with 18,925 inhabitants (as of January 1, 2019) after Reykjavík and its two suburbs Kópavogur and Hafnarfjörður .

The port city represents the largest population center outside the capital district and the largest service center in the north of the country.

The island of Grímsey has also been part of the municipal area since May 31, 2009 .

View from Hamrar over Eyjafjörður and Akureyri

Akureyri lies on the banks of the deep inland Eyjafjörður fjord and the Glerá river . To the west lies the mountainous Tröllaskagi peninsula with the Öxnadalur . North-west of Akureyri is the next larger town, Dalvík and the municipality of Hörgársveit .

Akureyri is only around 50 kilometers south of the Arctic Circle , which runs over the island of Grímsey , which can be reached from there by plane and ferry . The city is a good starting point for other sights in the north of Iceland, such as the Aldeyjarfoss and Goðafoss waterfalls, Lake Mývatn with its volcanic phenomena and Húsavík for whale watching. White smokers lie in front of the town of Akureyri in the Eyjafjörður fjord .

According to its northern coastal location, Akureyri has a maritime- polar climate with comparatively mild winters and cool summers.

Every year there is around 450 millimeters of precipitation and the sun shines for almost 1000 hours, which is typical for the north coast of Iceland. 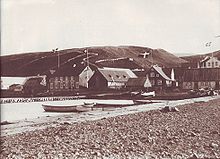 The first settlers built their farms by the fjord around the year 1000. The town was founded in 1602 as a trading post for the Danes . These had determined that the place was favorable for the construction of a sea port because of the steeply sloping seabed.

Akureyri flourished gradually and received 1786 the city charter . The place remained quite small for another hundred years and consisted of only a few houses.

This changed with the end of the 19th century and the associated lifting of trade restrictions (see History of Iceland ). Already after 1840 the city had grown noticeably with the influx of craftsmen and wage workers. While the merchants lived in the southern part of the village, the craftsmen settled in the north (in the Oddeyri district ). For a long time there were constant disputes between the two districts. Even the grammar school ( menntaskóli ) was located exactly on the boundary line, which was specially measured.

Finally, the city experienced a stormy upswing from 1900 after a trading company ( Kaupfélag Eyfirðinga og Akureyrar ) was founded and ensured prosperity with its shops, warehouses and affiliated companies. The expansion of the trawler fishery got Akureyri well.

Today one lives from the industries mentioned above, to which the high-tech industry was added. In addition, the true tourism as a growth factor.

Akureyri University was founded in September 1987 .

On August 1, 2004 the rural community Hrísey ( Hríseyjarhreppur ), an island in Eyjafjörður, was incorporated. The incorporation of a further eight municipalities was rejected by them in referendums in October 2005. Since June 1, 2009, the island of Grímsey belongs to Akureyri.

In contrast to most areas outside the capital Reykjavík and the surrounding area, the population of Akureyri is growing (1997 to 2006: + 10%). 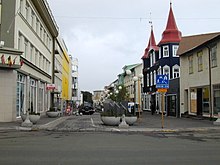 Numerous industrial companies have settled in Akureyri. In addition to the wool and fish processing industries, there is a large brewery.

The city is located on Ringstrasse 1 . It has its own airport , the runway of which was mostly built into the fjord, and a port that is also used by cruise ships. The traffic lights, whose red light shines in the shape of a heart, are unique worldwide. After the financial crash in 2008, the traffic lights were converted to give residents an incentive to think positively.

The Gamli Skóli, the old building of the Menntaskólinn við Akureyri

Akureyri has numerous schools and has a university since 1987 . The old building of the Menntaskólinn or grammar school was designed by the architect Guðjón Samúelsson and is the oldest school in town from 1880.

The image of the city center of Akureyri is strongly influenced by the Evangelical Lutheran Church above the city center. The church is simply referred to as Akureyrarkirkja ("Akureyris Church"). It was designed by the Icelandic architect Guðjón Samúelsson and inaugurated on November 17, 1940. On the architect's first drafts, the church was called Matthias Church, probably in honor of Matthías Jochumsson , who was a popular pastor and poet in Akureyri. However, this name did not catch on.

Remarkable in the bright and friendly interior of the church are reliefs by Ásmundur Sveinsson on the gallery and the large organ that was made in Oettingen in Bavaria . The church can also boast remarkable stained glass windows showing scenes from Icelandic church history, such as a scene in which images of gods were thrown into the named Goðafoss waterfall during the Christianization in 1000 . For a long time, until 2013, it was believed that one of the older window of the Second World War destroyed Coventry Cathedral in England comes from. You can also see a miniature sailboat attached to the ceiling in the church.

Péturskirkjan, the Catholic Church in Akureyri

The Glerárkirkja, which was designed by the architect Svanur Eiríksson , is located in the Glerárhverfi district . Like Akureyrarkirkja, it also belongs to the Evangelical Lutheran Church in Iceland. The first part of the church was consecrated on February 15, 1987, and five years later, in December 1992, the large nave. The church is characterized by a modern design and colorful glass windows by the artist Leifur Breiðfjörð . A small wooden church above the town, called Lögmannshlíðarkirkja, also belongs to the community.

Other churches and prayer houses

Akureyri also has a Catholic church , St. Peter, which was built between 1998 and 2000 when a house was remodeled. There is also a Pentecostal church and houses of prayer for the Salvation Army and the Plymouth Brothers (Sjónarhæðarsöfnuður).

Nonnahús and other poets' apartments

The garden is located high above the fjord above Akureyrarkirkja in the southwest of the city. You can see over 6000 foreign species of flowers, trees and other plants as well as around 400 native species. In principle, it is open all year round from about sunrise to sunset.

Akureyri in literature and music

The city of Akureyri is next to Reykjavík the main setting of the novel Fatal Intrigue by Arnaldur Indriðason . The title of the original Icelandic edition is Bettý . In Akureyri - at the beginning of the 20th century - parts of the plot of the novel The Ice Painter by Kristín Marja Baldursdóttir take place.

In the Tintin volume "The Mysterious Star", the ship Aurora comes to the port to refuel there. The crew is denied fuel, but a trick ultimately allows them to refuel and after a day they can continue north.

The song Leuchten by the band Kantine refers to the city of Akureyri.

Within Iceland there is a twinning with Hafnarfjörður .