A marina (also known as a yacht harbor ) is a port whose berths , berths and facilities are geared towards the needs of recreational shipping ( sailing and motor yachts ) and which is mostly operated commercially.

The larger number of berths is usually provided for boats and yachts that have a permanent berth in the marina on a rental or purchase basis.

There are also a number of guest berths available for visitors. For such a shorter use of the marina, mooring fees usually have to be paid on a daily basis, which usually depends on the length of the boat and less often on the number of people on board. The costs vary from less than 10 euros to over 150 euros for a twelve-meter ship per night. In the inland area in particular, there are municipalities and hotels that make their facilities available to boat tourists free of charge in order to promote tourism. The mooring fee is paid to the harbor master on the jetty or in his office. Free berths for guests are usually marked with green signs, occupied ones with red ones.

A guest port , on the other hand, generally has no permanent berths , but mainly guest berths . This type of marina is widespread in Sweden and Finland , for example , and in return there are closed marinas with no guest berths.

Along the Swedish coast there are more than 590 such harbors ( Swedish : gästhamn ), which are identified by a round, dark blue sign with an anchor and the corresponding lettering. On Swedish nautical charts, a red dragons on a green background are used to mark them.

In Finnish waters there are over 1,050 guest harbors ( Finnish vierassatama , Swedish gästhamn ), of which over 400 are located in the archipelago on the Baltic coast and the remaining 650 on the lakes inland.

Simple marinas offer berths that are protected from the swell and swell of large ships. If they are a little better equipped, there are also connections for electricity and drinking water at the berth .

The use of the facilities is partly free of charge, sometimes a flat-rate mooring fee is required, occasionally water and electricity are charged according to consumption. Showers and washing machines are often operated with coin-operated machines. Access to the facilities can be controlled by key or chip card; more and more systems use a number code. Sometimes it is necessary to come in during the harbor master's opening hours in order to be able to use the port infrastructure. More and more marinas have now switched to machines in which you pay the demurrage and receive a chip card to use the facilities.

There is usually a supermarket and a ship chandler on site or in the immediate vicinity of the marina. Supermarkets often deliver directly to the ship. Internationally there are usually refueling facilities for diesel fuel and gasoline .

In 2005, the German Tourism Association introduced the Yellow Wave, a standardized information system for water tourism in Germany. The logo identifies marinas and other moorings, and information about the equipment of the facilities is given.

In most marinas, the number of moorings is increased by jetties into the water. Often - mostly in tidal waters - these jetties are floating jetties , so that their height above the waterline remains constant. In some ports, moorings are made directly to the quay wall or to an offshore breakwater . For this purpose, there are cleats or bollards at regular intervals on the jetties , to which lines can be tied with a head blow. Sometimes there are only rings through which a line can be put. The head blow then occurs again on the cleat of the ship.

The common variants of how to create are described below.

The ship is moored parallel to the pier or the wall with at least two, but ideally 4 lines: from the bow to the front, from the stern to the rear and two so-called spring lines from the bow to the aft and from the stern to the front. These prevent the boat from twisting in wind or electricity at the berth. Berths that can be moored alongside are rather rare and - if they exist at all - reserved for very large ships or guests, because most of the “running meters of jetty per ship” are used.

Deploying your own anchor 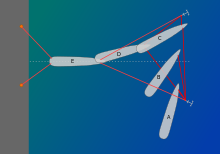 With this variant, which is also colloquially known as "Roman Catholic", each boat drops its bow anchor a few ship lengths in front of the berth and then bears backwards on the jetty or the wall. The disadvantage of this variant, which is particularly widespread in the Mediterranean, is that it can regularly lead to "anchor salad". If the harbor is densely occupied, the anchor chains can be accidentally laid one on top of the other, which, when cast, means that an anchor can no longer be hauled in or the anchor of another ship is pulled out. 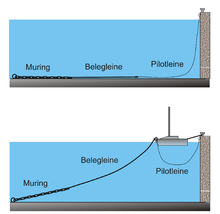 Mooring a boat with the help of a mooring line

There is a row of dolphins made of wood, steel or concrete in front of each jetty . There are two rows of dolphins between two opposite bridges. They form a narrow lane for the ship to enter the box. Every two dolphins are about a ship's width apart so that the ship can dock perpendicular to the pier. The ship is moored to the two dolphins with two stern lines and two fore lines between the bow and the jetty. In motorboat marinas there are also rows of dolphins, which do not form an alley in the respective box, but are spaced several boat widths apart. These dolphins must be much higher, as a wire rope is stretched from dolphin to dolphin. Two stern lines hang on this wire rope. When leaving the boat place, these stern lines are hooked into the fore line on the jetty so that they can be easily picked up again.

Alternatively, the bars are equipped with short finger bars running perpendicular to them. They allow mooring alongside, with the same arrangement of the ships, as well as convenient entry and exit. The finger bars are often shorter than the ship; In order to prevent a collision with the jetty, a mooring line (called a spring in this arrangement) must be laid from the end of the ship on the jetty to the tip of the finger jetty. 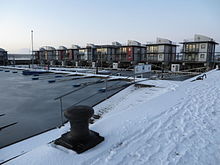 The Marina Sonwik in Flensburg - Mürwik in winter. The ships and boats have left the port.

Sailing , motorboat , surfing or diving schools and diving centers have set up in many marinas . Charter company with its own charter fleet, with or without a skipper , boat rentals, vessel dealers and aftermarket domiciled often directly in the marina or in the nearby area.

In some marinas you can find sailmakers , engine workshops , or riggers and workshops for ship electronics and ship electronics, sometimes a boat builder or a shipyard . Many marinas have a dry berth for the winter, or halls for the winter storage of ships. In order to bring the ships in the spring into the water and lift out of the water in the fall is a crane or travel lift available.

Marinas are mostly operated commercially or as a communal facility by the municipality, the city or by a sailing club or yacht club . Privately operated marinas are sometimes created in connection with a boat building company, a sailing school or a hotel. Marinas are increasingly being built as builder models: Hundreds of ship owners finance the project with shares for their own berth. In Greece, large marinas were built with European funds. In Croatia, the Adriatic Croatia International Club finances the so-called ACI marinas.

In Germany, marinas that are designed to be environmentally friendly carry the Blue Flag . High quality marinas are certified according to ISO-9001 and ISO-14000 . Many water sports associations offer other certification systems.