Grinzing was an independent municipality until 1892 and is now a district of Vienna in the 19th district of Döbling and one of the 89 Viennese cadastral communities .

Grinzing is located in the north-west of Vienna and, with an area of ​​613.52 hectares, is the largest district of Döbling. In the northeast it borders on Josefsdorf , then the border runs along the Wildgrube and the Schreiberbach to the east and then branches off to the south along Springsiedelgasse and Neugebauerweg. Along the Hungerbergstraße, the border to Unterdöbling follows the course of the Kaasgraben, which separates Grinzing from Sievering . The border finally runs over the Himmelstrasse and the Spießweg in a north-westerly direction to the city limits, which separates Grinzing from Weidling .

Grinzing is largely characterized by the wooded ridges of the Vienna Woods . The highest mountain in Vienna, the Hermannskogel, is located on the border with Lower Austria . In addition, there are some very famous mountains such as the Reisenberg , Latisberg , Vogelsangberg , Hungerberg , Pfaffenberg and Peter-Paul-Berg. In parts of the Grinzing Vienna Woods there are also some streams, such as the Schreiberbach in the Wildgrube, which runs partly unobstructed until shortly before Nussdorf . Moreover arise north of Latisberges who also Steinberger Bach called Nesselbach (of from Krapfenwaldl as Bach channel is held) and west of the travel mountain travel mountain stream (which will be performed as well as Bach channel from the border of the town center and in the stream channel of Nettle Beck leads), and in western part of Grinzing is the headwaters of the Arbesbach . Another characteristic of Grinzing are the still existing vines, which can be found particularly on the Reisenberg and the Hungerberg. 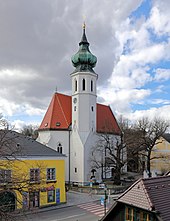 The name Grinzing is a real -ing -name, that is, it denotes the affiliation of people to a clan in general. In the case of Grinzing, the meaning of "with the people who belong to a man with the name Grinzo " is derived from. Grinzing was first mentioned in 1114 as Grinzigan . The Döblinger district museum derives the place name from the verb "rinnen" as "g'runnen" and from this, "settlement on the channel". The root word "G'rinn" in the sense of " flume to understand," a confluence of Grießbächchen. This corresponds to the Gothic, "rinno" for Grießbach or Lauf.

Grinzing in the Middle Ages

The village of Grinzing fell to the Grunzinger family in the 11th century . They built what was later known as the Trummelhof, of which remains have been preserved in the house at Cobenzlgasse 30. This former manor takes its name from the fact that it was supposedly built on a Roman ruin. Grinzing was a flourishing village as early as the 12th century . Wine growers and day laborers who worked for the monasteries and wealthy Viennese citizens lived in the village . The Grunzinger family died out in the 14th century with Rüdiger von Gründsing . In 1350 he was buried in the Minorite Church in Vienna . Grinzing was under the jurisdiction of the Klosterneuburg Monastery , which was able to retain land authority over the place until the 19th century . In 1426 the parish church of Grinzing , the church “Zum heiligen Kreuz”, was built.

Grinzing to the north around 1900

As a result, however, the place repeatedly suffered from severe devastation. In 1484 Matthias Corvinus devastated the place, and in 1529 the Turks caused severe damage. In addition, a major fire incinerated parts of the village in 1604. In 1683 the Turks destroyed the place again after the reconstruction. Nevertheless, Grinzing developed best compared to the surrounding villages. In 1713 there were already 70 houses in the village, but the plague hit the place hard. More than half of the houses were contaminated and 129 people died. This is likely to have strongly inhibited the growth of the place. In 1783, the Grinzing church was also elevated to a parish church , it was financed by the abolition of some basic orders in the district by Joseph II. Grinzing developed only slowly in the period that followed. In 1795 there were 83 houses, in 1822 99 houses and until 1835 there were no new buildings. In 1831 the place had 99 houses with 835 inhabitants and was hardly larger than in 1795. After that, however, a stronger growth set in. By 1890 the population had increased to 1,421 people in 209 houses.

In 1892 Grinzing was finally merged up to the ridge of the Vienna Woods with Oberdöbling , Unterdöbling and the suburbs Kahlenbergerdorf , Nussdorf and Heiligenstadt , Sievering and Josefsdorf to form the 19th district of Döbling. The rest of Grinzing came to Weidling .

Grinzing in the 21st century

The fame of Grinzing is based on viticulture even today. In order to use the potential of the historically rare structure of Grinzinger Platz and to improve the quality of life in the town center, the Döblinger Greens started an ideas competition in 2005 for an innovative redesign in joint planning with citizens and experts. The design ideas and suggestions for Grinzinger Platz including Himmelstrasse and Cobenzlgasse should address the special urban-rural transitional situation in the center of Grinzing. The zoning and development plan 2005 for the town center of Grinzing refers in its explanatory report to the “Grinzing Plan” by the “Grinzing planning team” under the direction of Gustav Peichl from 1975 and to the importance of the historical character of Grinzing. The establishment of a protection zone for the majority of the town center is intended to secure the small-scale village building structures and forms in their existence and ensure moderate development opportunities in the residential area facing away from the street. The massive structural development and gentrification that began in 2004, as well as the termination of leases for traditional wine growers, led to an intensive public discussion and the commitment of neighbors, prominent artists and citizens' initiatives such as the world cultural heritage site for Grinzing and the monument protection initiative for the Grinzing cultural landscape and wine tavern culture . On the initiative of City Councilor Rudi Schicker , the “Grinzing animated” platform was founded in 2007 together with the Kronen Zeitung as a support committee for the “Grinzing Mission Statement” initiative. The citizen participation process started in 2008 with the working groups “ Ortsbild ”, “ Public Spaces and Transport” and “Wirtschaft” in order to develop ideas and concrete suggestions for improving the living and economic situation of Grinzing together with experts. The concept of Grinzing envisages the preservation of Grinzing "as a wine and wine tavern with its cultural assets and the surrounding cultural landscape - the vineyards". The planned redesign concept of the Grinzinger Angers in the mission statement report 2009 met with strict rejection of the neighbors. The discussion about the Grinzing cultural landscape and the world cultural heritage for Grinzing and the region of the Wiener Pforte has been prolonged. 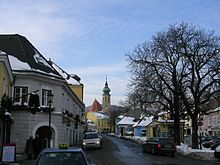 Grinzing with a view of the parish church

The distribution of the fields in Grinzing in 1826 gives an idea of ​​the importance of viticulture and the use of wood. 45 percent of the total area was covered by forest that belonged to Klosterneuburg Abbey. Another 23 percent were used as vineyards, while arable farming played a subordinate role with a share of just under 10 percent. In addition to viticulture, brewing also played a role in Grinzing at times. In 1814 the Grinzinger brewery was founded in Trummelhof. It existed with a few interruptions until 1931.

The parish church of Grinzing around 1900

In addition to the numerous wine taverns, the Grinzing parish church and the Kaasgraben church are particularly worth seeing. In the extensive part of the Vienna Woods there are also the Habsburgwarte on the Hermannskogel, the Karl-Lueger monument, the restaurant "Cobenzl" on the Reisenberg , as well as the romantic forest - Biedermeier cemetery on the slopes of the Kahlenberg, etc. A. with the graves of the "most beautiful woman of the Congress of Vienna" and various high aristocrats of the Metternich era.

The organ in the parish church of Grinzing is a particular treasure: until 1829 there was a baroque parapet positive with 4 registers, on which, according to local tradition, Beethoven and Schubert played several times. Due to a particularly good vintage in 1829, the Viennese “bourgeois organ maker” Christoph Erler was commissioned to expand the instrument with an additional major work and pedal to 11 stops. The aforementioned parapet positive was retained unchanged and only placed in a new housing. In 1857 the organ builder Alois Hörbiger carried out a further enlargement of the organ to 15 registers for the same reason . In 1895, as part of an overhaul by the organ builder Josef Ullmann, a register of the parapet positive in the treble was replaced. From 1975 the organ was so dilapidated and unplayable due to lack of care that it was replaced by an electronic keyboard. On the initiative of the organ builder Peter Maria Kraus , who was born in Grinzing , the organ was extensively restored in 1997 by his workshop according to the strictest museum standards and has been in use again ever since.

Old area of ​​the Grinzing cemetery

Donkey for the Kahlenberg

As a hiking guide from the Biedermeier period , the work " Vienna's Environs for Twenty Hours in Circumferences " by Adolf Schmidl reports from 1835, there was a facility in Grinzing for hikers to the Kahlenberg or to the Krapfenwaldl that was unique in Vienna:

Left it goes to the Kobenzl or Reisenberg, right to the Josephs or Kahlenberg. This is where house number 41 is, where donkeys and horses are ready to ride up the mountain. You pay 20 Kreuzer for the ride on the Kahlenberg or the Krapfenwäldchen, and the same amount back from there. The extent to which this establishment met the needs of the public is shown by the fact that on fine summer days the animals are so busy all day long that one has to order them in advance if one wants to be sure of getting one. But it is hardly believable that this arrangement was made only two years ago, and it is even less believable that the unnatural prejudice against the excellent long-eared man is so deeply rooted in the Viennese that this cavalcade struggled for a long time with satyrs and irony of all kinds would have.