Oberdöbling was an independent municipality until the end of 1891 and is now a district of Vienna in the 19th district of Döbling as well as one of the 89 Viennese cadastral communities . 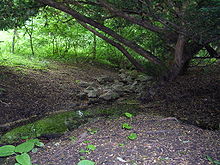 Oberdöbling is located in the south of the municipality. The cadastral community extends over an area of ​​241.20 hectares . In the north, Oberdöbling borders the districts of Sievering and Unterdöbling up to the Krottenbach . The eastern borders to the district part of Heiligenstadt are formed by the Barawitzkagasse and Heiligenstädter Straße and to the district of Alsergrund by the former line wall . South borders Oberdöbling to the district Währing and east to the Döblinger part of the same cadastral Währing . The Hart settlement was originally located in the Oberdöbling area. However, the desert already disappeared in the 14th century. The center of Oberdöbling developed along today's Hofzeile, on a ridge that drops steeply about 10 meters after Unterdöbling towards the Krottenbach.

Döbling was first mentioned in 1114 as de Teopilic . Its name is derived from the Slavic, where toplica means "swampy water" and refers to the location on the Krottenbach. Another possible interpretation is derived from the Old Slavic toplica, "warm brook". Later spellings of the place name were, for example, Toblich, Töbling and Tepling.

Döbling until the parish split

Initially , the residents of Döbling were almost exclusively farmers who mainly produced for their own needs. Wine and grain were grown for sale . In addition, fruit , vegetables and dairy products were produced. From the 12th century Döbling was under the aristocratic family of those von Topolic , after which it came to the Dominican convent of Tulln and is named in 1310 as the village of the women of Tulln. After that, independent villages emerged from the settlement, which were separated by the Krottenbach . Unterdöbling initially had the name Chrottendorf , the name Unterdöbling is said to have come up only in the 15th century. The separation of the two places is first mentioned in a document in 1591.

Oberdöbling until the 18th century

The village has its own seal from 1694. It shows St. Jacob with the inscription Sigil der Gemain Ober Döbling 1694 . The second Turkish siege of Vienna hit the place hard. In 1689, six years after the Battle of Vienna, only 50 of 850 quarters of vineyards were cultivated and the town remained small for a long time. At the beginning of the 18th century, Oberdöbling was a little smaller than the neighboring Unterdöbling. When the plague reached the town in 1713, Oberdöbling got off relatively lightly. Of the 31 houses, only 5 were contaminated and 13 people died. In 1721 Oberdöbling consisted of three lines, the Hofzeile (today the upper right part of the Döblinger Hauptstraße ), the Kirchenzeile (today the left part of the Hofzeile) and the Bachzeile at the Krottenbach (today the right part of the Hofzeile). There were only 39 houses in total. By using the district area as an imperial hunting area, Oberdöbling also became attractive for the nobility and Viennese citizens. Those who could afford it built a "second home" here. Similar to Hietzing , which benefited from the proximity to Schönbrunn Palace , the foundation stone for a special development of the suburb was laid here. Between 1765 and 1786 five new streets were built in Oberdöbling. Today these are Döblinger Hauptstrasse, Heiligenstädter Strasse, Pyrkergasse, Pokornygasse and Billrothstrasse. Then the place grew to a new district, which included the Gymnasiumstrasse, the Hardtgasse and the Pyrkergasse. This district called Neu-Döbling was characterized by the wealth of the homeowners, while Alt-Döbling had an irregular development with sometimes many poor huts. The park of the Henikstein family was also created here at this time .

Oberdöbling until incorporation in 1892

After that, however, growth accelerated. In 1780 there were 136 houses with 932 inhabitants in Oberdöbling. However, growth slowed again in the following period. Between 1822 and 1835, the number of houses increased from 188 to 202 houses with 1,550 inhabitants. The last owner of the manor of Oberdöbling was Anton Edler von Würth, who had acquired Oberdöbling in 1824 from the kk state property administration. He also exercised the manorial rule over Sievering. A massive construction boom set in in Oberdöbling in the middle of the 19th century. In 1853 there were 4,229 inhabitants in 323 houses, in 1890 14,460 inhabitants in 567 houses. In 1858 gas flames were introduced for street lighting in Oberdöbling. The gas supply was taken over by an English company, which built a gas works in the Gymnasiumstrasse - Billrothstrasse area in 1856. In 1892, Oberdöbling, together with Unterdöbling and the suburbs of Grinzing , Kahlenbergerdorf , Nussdorf and Heiligenstadt, Sievering and Josefsdorf, formed the 19th district of Vienna (= Döbling).

In contrast to the surrounding villages, viticulture no longer played a major role in Oberdöbling at the beginning of the 19th century . Agriculture and fruit growing were much more important. More than half of the area was covered by fields and more than ten percent by orchards. In contrast, viticulture only took up about seven percent of the area. As early as 1754, a velvet , silk and thin cloth factory was established in Oberdöbling , which initially employed up to 100 workers. In 1790 even 300 people worked here. A hammer forge was founded in 1783 at the confluence of the Arbesbach and Krottenbach rivers . The Döblinger brewery , which was founded in 1833 as a branch of the Gaudenzdorfer brewery and was acquired by the owners of the Ottakringer brewery in 1856, became famous . After the brewery was destroyed in World War II , the Kopenhagenhof was built here. In the 19th century, other important companies were established in Oberdöbling, such as the "United Ink Factory Hartmann und Mittler", which existed until 1968 in Gatterburggasse 8 in 1867 and later traded under the name "Kuli-Werk". One of the best-known companies in Döbling is the Kattus sparkling wine cellar today .

The first theater was founded in Oberdöbling in 1835 in the deconsecrated Johanneskapelle on the corner of Döblinger Hauptstrasse / Hofzeile. In 1859, after the building was sold to the sisters of the poor child Jesus, the actors moved to the “Wendl” theater inn on the Währinger Spitz, which had a summer arena and a theater hall. They played rough antics, but also pieces by Johann Nepomuk Nestroy . Even Alexander Girardi and Max Reinhardt played here as beginners . Between 1881 and 1888 the theater was closed due to fire protection regulations, and in 1893 the entire inn was closed. The "Finger" casino in Oberdöbling, where Joseph Lanner and Johann Strauss (father) gave concerts, was also important. However, the casino had to close in 1840, presumably due to competition from the neighboring Casino Zögernitz (Döblinger Hauptstrasse 76). Founded in 1837, it developed into one of the most popular casinos in Vienna, and Strauss and Lanner now performed here. In the 1960s the building was converted into a hotel and restaurant. Today the most important museum of the district is located in Oberdöbling, the District Museum Döbling , which was housed in the Villa Wertheimstein .

Monastery Church of the Holy Family

A church in Döbling was first mentioned in 1267, but a continuous existence of a parish church can only be proven from the 15th century.

The old Döblinger Friedhof was originally in Unterdöbling and was closed in 1927. Here, among other things, were the graves of Johann Strauss (father) and Joseph Lanner, whose bones were reburied in the Vienna Central Cemetery. The two gravestones were included in the Strauss-Lanner Park, which was designed on the site after 1927. In addition, Nikolaus Lenau , Ludwig Boltzmann and Johann Nepomuk Berger were buried in the cemetery , and they were buried in graves of honor in other cemeteries. The New Döblinger Friedhof was then built in Oberdöbling on the border with Glanzing and Währing . Here are the tombs of important families of the district such as Wertheimstein, Zacherl, Gräf or Kattus. Furthermore found here Theodor Herzl , Wilhelm Miklas , Robert von Lieben and Ferdinand von Saar laid to rest. Farther south, on the border with the Währing district, is the remaining part of the Israelite cemetery in Oberdöbling, the Währing Jewish cemetery . It is the last remnant of the abandoned Währinger cemetery.