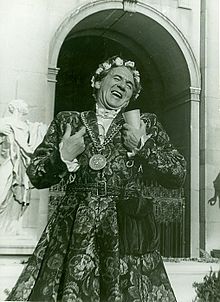 Tomb of Attila Hörbiger and Paula Wessely in the Grinzing cemetery

Hörbiger moved to Vienna with his parents in 1903. From 1906 to 1914 he attended the collegiate high school St. Paul in Lavanttal , where he gained his first acting experience. In 1919 he made his stage debut in Wiener Neustadt. He then played at the Schwäbische Volksbühne in Stuttgart , 1920 in Bozen , 1921 at the Raimundtheater in Vienna, Bad Ischl and 1922 at the Stadttheater Reichenberg , 1923 in Vienna at the Jarno-Bühne, 1925 in Brno and from 1926 to 1928 at the New Theater in Prague .

Hörbiger was engaged at the Theater in der Josefstadt in Vienna from 1928 to 1949 , and from 1950 to 1975 he was a member of the Vienna Burgtheater ensemble . On October 15, 1955, on the occasion of the reopening of the Burgtheater, he played Rudolf von Habsburg in Grillparzer's King Ottokar's Glück und Ende .

From 1935 to 1937 and 1947 to 1951 he played Jedermann at the Salzburg Festival . On April 6, 1974 he played Nathan at the Burgtheater premiere of Nathan the Wise , his youngest daughter Maresa the Recha. In 1985 Hörbiger was on stage for the last time as Winter in Ferdinand Raimund's Der Diamant des Geisterkönig . In 1986 a portrait of him was unveiled in the Burgtheater's gallery of honor.

After the annexation of Austria , Hörbiger became an NSDAP member with membership number 6,295,909 . Together with his second wife Paula Wessely, he starred in return , an anti-Polish and anti-Semitic propaganda film by Gustav Ucicky from the year 1941. Because of the strong propagandistic intention in the interests of Nazi rulers, this film after the end of the Third Reich as Reserved film has been classified. Before that, the couple shot the propaganda film “ Harvest ” for the Austro-fascist regime.

In 1987 Hörbiger died after a stroke in Vienna. He is buried in Vienna in an honorary grave in the Grinzinger Friedhof (group 6, row 3, number 3) at the side of his wife. His grandson Cornelius Obonya played the role of Jedermann at the Salzburg Festival from 2013 to 2016 .