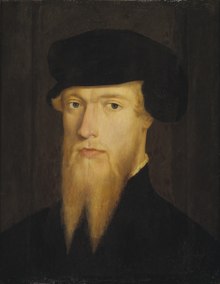 When Erik was two years old, his mother died. His stepmother, Margareta Leijonhuvud , had a tense relationship with him because he stood before her firstborn son Johann in the line of succession . Erik first had a German private tutor, Georg Norman, and then a French one, the Calvinist Dionysius Beurreus (1500–1567). With both of them he received an education that was as comprehensive as possible for the time: Erik learned various foreign languages, was gifted with mathematics , very experienced in history , a good writer and also somewhat familiar with astrology .

After he went public, he was soon called the "chosen king", among other things because he corresponded to all the clichés of a Swede: Erik was blond-haired, blue-eyed, stately and had an impressive beard. In 1557 he received Kalmar , Kronobergs län and Öland , whereupon he held court from Kalmar Castle . During this time, the relationship with his father was strained and both spied on each other. Especially Erik's plans to marry the English Princess Elisabeth Tudor, later Queen Elisabeth I of England , displeased Gustav Wasa. Erik had already planned a trip to England, but the death of his father on September 29, 1560 prevented this trip. His later marriage proposals to Maria Stuart , Renata of Lorraine , Anna of Saxony and Christine of Hesse were also rejected.

It is also alleged that Gustav I wavered between handing over the crown to his son or throwing him in prison, also because of all his children he loved his eldest son from his second marriage, Duke John of Finland , the most.

After his accession to the throne in 1560, Erik hurried to consolidate his power, especially with regard to his brothers, who had received great duchies but whose position as king was not clearly established. After his coronation, on June 29, 1561, he curtailed the political power of the dukes in the Articles of Arboga. As a further move against his brother Johann, who was Duke of Finland, he placed the city of Reval (today: Tallinn ) under his protective power and led campaigns of conquest in Estonia . With this he got ahead of his brother, who had similar plans.

Johann then turned to the Polish King Sigismund II August for help . He married his younger sister Katharina Jagiellonica and received, in exchange for a substantial sum of 120,000 thalers, land in Livonia , the location of which hindered Erik's expansion policy. When Johann returned to Turku from Poland in early 1563 , Erik asked him to decide whether he would stand by Poland or Sweden. Johann replied evasively, but the remarks of a person from Johann's service were enough to accuse Erik on April 23, 1563 of high treason. The Reichstag sentenced Johann to death, but after his capture he and his wife were pardoned for imprisonment at Gripsholm Castle .

While this fratricidal quarrel continued, Erik was involved in the Three Crowns War (1563-1570) with Denmark , the German Hanseatic League and Poland-Lithuania . Erik personally took part in some battles but could not prove himself to be a glorious hero or general. This circumstance and the lack of other suitable generals caused a less favorable course of the war for Sweden. In contrast, Erik's fleet was able to achieve some important victories.

Erik was not more successful domestically. The country was ravaged by the plague , and from 1563 his mental state began to deteriorate. In May 1567, under signs of pronounced paranoia, Erik had many members of the influential Swedish Sture family arrested and executed for alleged high treason , which led to a conflict between the king and the nobility. At the same time, Erik was also considered insane by the Swedish people.

In autumn 1567 he released his half-brother Johann and his wife Katharina. His marriage to his lover Karin Månsdotter , who came from a humble background, also alienated him from the nobility. The efforts of the war, the constant internal political strife and his failed marriage aspirations exhausted Erik so much that he was no longer able to counter a revolt of the Swedish nobility in 1568. On September 29, 1569 he was in turn captured and deposed by Johann, whereupon he was named Johann III. of Sweden ascended the throne.

Erik XIV died on February 26, 1577 in Örbyhus Castle . It is believed that he was poisoned. His grave is in Västerås Cathedral and can be visited.

Erik XIV married the middle-class Karin Månsdotter in 1568 , with whom he had the following children:

He was also the father of two illegitimate daughters from a relationship with Agda Persdotter : Virginia Eriksdotter (born January 1, 1559, † 1633) and Constantia Eriksdotter .