This article deals with the structure. For other meanings see Gripsholm Castle . 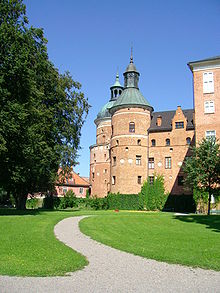 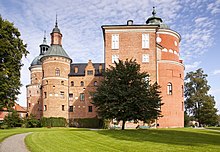 View from the west

The castle-like Gripsholm Castle on Lake Mälaren in Mariefred, Sweden, in the municipality of Strängnäs was built in 1537 by Gustav I. Wasa - on the site of a castle from 1380. Today the castle houses the State Portrait Collection with one of the largest collections of portrait drawings. It comprises more than 2000 paintings. The castle has been registered as Byggnadsminne since 1935 and is also of Swedish imperial interest .

In the German-speaking world it was best known through Kurt Tucholsky's novel Schloß Gripsholm .

Gripsholm was built in 1383 as a castle by the Swedish imperial council and large landowner, the Truchsess Bo Jonsson from the Grip family. He had acquired some goods in the area around Mariefred and then had a castle built in a strategically favorable location on a small island ( Swedish holme ). The castle was built on the grounds of the Näsby estate after Jonsson bought it in 1379. The castle , probably its predecessor, was first mentioned in a document in 1381 .

After Jonsson's death in 1386, the Danish Queen Margarethe I acquired the castle from his descendants between 1402 and 1404 and left it and the lands to Count Hans von Ewersten as pledge between 1423 and 1446. Ewersten deployed a Vogt , the German Hartvig Flögh, to manage the surrounding estates. In 1434, however, Flögh set fire to the castle after the news of a peasant revolt in the course of the Engelbrekt revolt made the rounds. After the fire, the wooden structures of the castle were rebuilt and the castle remained in the possession of the crown until 1472.

Then Sten Sture the Elder bought the castle, expanded it and additionally fortified it. 20 years later, in 1498, he gave it to the nearby monastery, the Marienfred Charterhouse , which he had donated five years earlier. This monastery was both the last to be donated and the first to be withdrawn from the Crown in 1525.

In this year Gustav I. Wasa decided to move his permanent residence to Gripsholm and for this reason had the castle expanded, but also upgraded to a fortress. The most important measure was the addition of the four mighty towers, the outer walls of which are up to 4 m thick. Gustav lived in one of the towers himself. Part of the old walls can still be found in the outer bailey.

The first work on the palace complex was finished in 1544 and was directed by Henrik von Cöllen and Fredrik Nussdorffer . Friedrich Nussdörfer, originally from Nuremberg, had previously built the Albrechtstor in Königsberg in 1532 , a gatehouse above the north-eastern entrance to the castle there. Due to lack of building materials, Gustav had the Vårfruberga monastery , which was in the same municipality, demolished. After his death, Erik XIV continued building the palace with long interruptions . The castle was unsuitable as a defensive castle at the time, but it was used sporadically as a prison .

Erik left his brother Johann III there. from 1563 to 1567 together with his wife Katharina Jagiellonica . For this reason, their first two children were born there. In 1571 Johann arrested his brother Erik and his family at the castle. On June 13, 1573 Erik was born by Gustav Wasa's son Karl, later King Karl IX. , officially taken from captivity because of necessary ceiling repairs. At times up to 35 state prisoners were in prison or arrest on Gripsholm .

From 1592 to 1600 the Reichssaal was built under Karl and the castle buildings were redesigned. From 1632 to 1640 Maria Eleonora von Brandenburg , the queen widow of Gustav Adolf, lived in the castle. In 1690 the queen wing was built. In 1773 the castle was opened by King Gustav III. remodeled and a first theater built by Carl Frederik Adelcrantz . It was rebuilt by Erik Palmstedt between 1781 and 1783.

The last major restorations and alterations took place under Fredrik Lilljekvist in the 1890s. At that time, attempts were made to reverse all changes from around the year 1600, but after violent protests (including from Verner von Heidenstam ) the largest changes and demolitions could not be carried out. The complete renovation of the third floor can be seen as the biggest change. The old paintings in the inner courtyard were removed and replaced with new Renaissance decor. The debate about this restoration meant the end of the historicizing phase of the Swedish cultural heritage preservation , which u. a. the cathedrals in Lund and Uppsala had fallen victim.

Gripsholm Castle is still one of the nine official royal castles in Sweden, all of which are visible at least in part: The Stockholm Royal Palace (the official residence of the King), Drottningholm Palace (residence of the King), Rosendal Palace , Rosersberg Palace , strömsholm palace , Schloss Tullgarn , Castle Ulriksdal , the Hagapark (Haga Castle is the residence of the Crown Princess) and the park of the royal summer villa Solliden , which was built near Borgholm Castle , which has only survived as a ruin .

Runestone Sö 178 by Gripsholm in the "cruciate ligament style"

The Gripsholm rune stones (Sö 179 and Sö 178) are located next to the driveway to Gripsholm Castle.

The runestone Sö 179 made of granite in the runestone style Fp is one of the 26 Ingvar rune stones . Its height is about 2.0 m, its width 1.0 m. The original location is unknown. It was discovered in the early 1820s and then formed the threshold of the basement of the east tower of the castle. It was under both side walls of the door and covered in tar, suggesting that it was part of another construction before it was used as a building material for the castle. It was not until 1930 that the stone could be taken out of the castle and read in full.

The inscription reads: “Tóla had this stone raised in memory of her son Haraldr, Ingvarr's brother. They valiantly traveled far for gold and gave (food) to the eagle in the east. (They) died in the south in Serkland . "

The inscription says that it was built in memory of Haraldr, Ingvar's brother, who presumably died with Ingvar on the Caspian Sea . It was discussed why the rune stone was only built after Haraldr and not after Ingvar. The common explanation is that Tóla was just Harald's mother and the men were half-brothers. It is also possible that there were originally two stones, of which the one that had disappeared was reminiscent of Ingvar. A third possibility is that "brother" refers to brother in arms, blood brother or something similar. This usage of the word appears on one of the rune stones from Hällestad in Skåne .

The second half of the inscription is written in alliterative verse of the form Fornyrðislag . The phrase "to feed the eagle" is a kenning which means "to kill enemies".

Hälgulv (?) And Öulv de läto both set the stones after his brother Kätilmund and giorde bro after Soma, his mother. But Brune (?), Your brother, suggested (the runes).