This article describes the Swedish queen; for the Countess Palatine, who lived at the same time, see Marie Eleonore von Brandenburg . 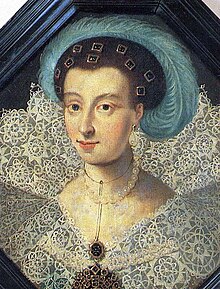 Maria Eleonora of Brandenburg (born November 11, 1599 in Königsberg , † March 28, 1655 in Stockholm ) was a princess of Brandenburg and queen of Sweden by marriage .

Maria Eleonora was a daughter of Elector Johann Sigismund von Brandenburg (1572–1619) from his marriage to Anna (1576–1625), daughter of Duke Albrecht Friedrich of Prussia . The princess was raised in the Lutheran faith by her mother , although her father had accepted the Reformed creed.

Maria Eleonora met her future husband Gustav II Adolf of Sweden (1594–1632) in Berlin in 1618, where he stayed incognito as Colonel Gars to take a look at her. Her mother Anna drove the marriage project forward, while the Catholic camp feared the rapprochement between Brandenburg and Sweden. King Sigismund III. von Poland therefore also asked for the hand of the princess for his son Władysław . Although Elector Johann Sigismund was very fond of this plan, his wife Anna finally prevailed. At the head of the Swedish legation, which had come from Sweden in eight ships and was supposed to conclude the marriage contract, was Chancellor Axel Oxenstierna . Because of Johann Sigismund's skepticism, he appeared indulgent and pushed for the contract to be concluded quickly.

On November 25, 1620 Maria Eleonora married King Gustav II Adolf in Stockholm . On November 28th she was anointed and crowned Queen of Sweden. The marriage was happy. Gustav Adolf loved his wife and she accompanied him on his campaigns after she landed in Pomerania in 1631 at the head of a troop formation of 8,000 men for reinforcement . He did not involve his wife in the government, however, because the queen was considered superficial and was described as capricious, intellectually not gifted and spirited. Her love of music, painting, and architecture made her prone to waste and she ran into considerable debt. In Sweden itself, the queen was not very popular because of her disconcerting display of splendor and her fondness for foreigners.

Gustav Adolf, the lion of the north, fell in the battle of Lützen in 1632 . Maria Eleonora was deeply affected by the death of her husband. Rumors soon spread: the coffin that Maria Eleonora accompanied from Lützen to Sweden always had to stay close to her; The king's embalmed heart in a gold box was hung over her bed every night and in Stockholm she tried to postpone the final burial of Gustavus Adolphus. However, this image of the hysterical, depressive and lavish queen widow, which has entered history, has been relativized in recent research, for the first time in the 1980s by archivist Åke Kromnov, among others, and most recently in the monograph Drottningen som sa nej by Moa Matthis , published in 2010 . Accordingly, this image can largely be traced back to the propaganda activities of the Imperial Council , representing the Swedish aristocracy , which wanted to prevent the queen widow's usually significant participation in the guardianship government. This strategy was successful: in fact, with Gustav Adolf's death, an era of de facto rule of the high nobility began, above all the Oxenstierna family , which was only halted by the reductions at the end of the 17th century.

Maria Eleonora's six-year-old daughter Christina officially became Queen of Sweden in 1632 after the death of Gustav Adolf. Axel Oxenstierna took over the government . Maria Eleonora, who learned of the news of her husband's death during her stay in Erfurt , returned to Sweden immediately. Here she soon came into conflict with Oxenstierna because of the guardianship and upbringing of the underage queen. She retired to her widow's residence at Gripsholm Castle , where Oxenstierna is said to have told her that she had no more freedom than other noble Swedish widows. Her correspondence with relatives in the empire, namely the Saxon Electress Magdalena Sibylla , was monitored. Maria Eleonora complained that she was treated like a conspirator .

In 1640 she finally made the decision to secretly leave Sweden. She fled under adventurous circumstances and with the consent of the Danish King Christian IV. Initially to Gotland , where she arrived on July 24, 1640 and was greeted with the thunder of cannons. At Gripsholm Castle, the escape of the queen was noticed after seven days and was only reported after another four days. Maria Eleonora later lived at the royal Danish court in Nykøbing .

On December 24, 1642 an agreement was reached that Maria Eleonora had to leave Denmark. In the summer of 1643 she took up residence in Insterburg and received 40,000 Swedish thalers annually on her Wittum . Her daughter increased this amount again from her own resources. The queen widow often stayed at the court of the Brandenburg Elector in Königsberg and complained about the unreliable payment of the Swedish money. After taking over the government in 1644, her daughter got in touch with her mother to promote a Swedish-Brandenburg marriage project.

In the summer of 1648 Maria Eleonora finally returned to Stockholm. She spent the last years of her life in a reconciled relationship with her daughter. She died shortly after their abdication and was buried in the Riddarholmskyrkan .

Maria Eleonora had the following children from their marriage: