King Sigismund on a painting by Martin Kober , 17th century

Sigismund III. Wasa ( Polish Zygmunt III Waza , Lithuanian Zigmantas Vaza , Swedish Sigismund Vasa ; * June 20, 1566 at Gripsholm Castle , Mariefred , Sweden ; † April 30, 1632 in Warsaw , Poland ) was King of Poland and Grand Duke of Lithuania from 1587 , elected head of state of Poland-Lithuania , from 1592 until his dismissal by the Swedish State Council in 1599 heir-king of Sweden and from 1599 until his death in 1632 titular king of Sweden.

Sigismund III. was born as the son of King John III. of Sweden and Katharina Jagiellonka , sister of the Polish King Sigismund II August . So he belonged to both the Wasa and the Jagiellonian families .

Banners of Poland during the Sigismund III reign. Wasas. 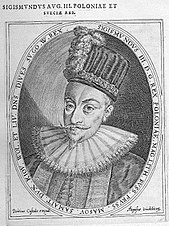 King Sigismund on an engraving by Dominicus Custos

Raised Catholic by his mother , he was elected King of Poland on August 19, 1587 after the death of Stephan Báthory . The efforts of the Polish Chancellor Jan Zamoyski and his aunt Anna , Báthory's widow, played a major role in this election . The latter lent the Chancellor 100,000 guilders to raise troops to defend their nephew. Sigismund promised to keep a fleet on the Baltic Sea , to secure the eastern border against the Tatars and not to visit Sweden without the consent of the Polish Parliament .

Sixteen days later he signed the Kalmar Articles that governed future relations between Poland and Sweden, as in time he would succeed his father as King of Sweden. The two kingdoms were to be united indefinitely, but each should keep its own laws and customs. Protestant Sweden should enjoy freedom of religion and be ruled in its absence by seven Swedes - his Protestant uncle Karl and six other persons appointed by the king. Sweden should therefore not be administered from Poland.

A week after signing these regulations, the young prince left to take possession of the Polish throne. He was expressly ordered by his father to return to Sweden if the Polish deputation awaiting him in Danzig insisted on the cession of Estonia to Poland as a condition for his assumption of power. It turned out that the Poles were even more difficult to please than expected; Finally, the compromise was reached, the territorial decisions on the time after the death of John III. postpone. Sigismund was now properly crowned on December 27, 1587 in Krakow .

The situation in Poland

Sigismund's position as King of Poland was extraordinarily difficult. As a foreigner, he could not count on the sympathy of his subjects from the start. As an educated and distinguished man who loved music and art, the landed gentry , who viewed all artists and poets either as mechanics or as adventurers , had to remain incomprehensible to him ; conversely, he remained a stranger to them. His circumspect restraint and imperturbable calm were branded as stiffness and arrogance. Even Zamoyski, who brought him to the throne, complained that the king was possessed by the devil.

Sigismund's difficulties were exacerbated by his political views, which he had already drawn up from Sweden and which were diametrically opposed to those of the almighty Chancellor. Although his foreign policy concept was arguably impracticable, it was clear and precise compared to the Zamoyskis. It aimed at a close alliance with Habsburg Austria , with the double aim of including Sweden in its sphere of influence and keeping the Hohe Pforte (government of the Ottoman Empire) in check by connecting the two great Catholic powers in Central Europe. A corollary to this concept was the long overdue reform of the Polish constitution, without which nothing useful could be expected from any political alliance. Sigismund's intentions were those of a statesman who clearly recognizes the existing grievances and wants to remedy them. But all his efforts were hampered by the resentment and distrust of the magnates led by the Chancellor .

The first years of Sigismund's reign reflected an almost continuous struggle between Zamoyski and the king, in which the opponents achieved little more than to keep each other at bay. At the first Sejm (Reichstag) in 1590, Zamoyski thwarted all efforts of the Austrian partisans. The king then took advantage of sudden vacancies in the top ranks of officials by bringing the Radziwiłłs and other Lithuanian dignitaries to power; for a time he curtailed the authority of the chancellor. In 1592 Sigismund married Anna of Austria , and in the same year a reconciliation was arranged between the king and the chancellor, which should allow him to live after the death of his father Johann III. to take possession of the vacated Swedish royal throne.

The situation in Sweden 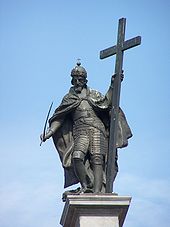 He arrived in Stockholm on September 30, 1593 and was crowned in Uppsala on February 19, 1594; to do this he had to guarantee that Sweden could continue to cultivate its Protestant denomination. On July 14th, he left for Poland and let Duke Karl and the Senate rule Sweden during his absence. Four years later, in July 1598, Sigismund was forced to fight for the crown in his home country as his uncle was about to usurp power with the help of the Senate. In Finland, then still part of the Kingdom of Sweden, Admiral Clas Eriksson Fleming was one of Sigismund's most famous supporters. In Finland, the power struggle between Sigismund and Charles was associated with a peasant uprising, known as cudgel war . Unhindered by Karl's fleet commanded by Joachim Scheel , Sigismund landed in Kalmar with 5000 men, mainly Hungarian mercenaries; the fortress opened the gates for him at once, and the capital and the country welcomed him. The Catholic world viewed his progress with confidence. Sigismund's success in Sweden was seen as the beginning of even greater triumphs.

But it should turn out differently. After unsuccessful negotiations with his uncle, Sigismund advanced with his army from Kalmar, but was defeated by the Duke at Stångebro on September 25, 1598. Three days later he agreed to the Linköping Peace Treaty , according to which all points in dispute between him and his uncle were to be submitted to a Diet in Stockholm; immediately afterwards he took the ship across to Danzig. He secretly complained that Linköping's agreement had been blackmailed and that it was therefore invalid. Sigismund never saw Sweden again, but he stubbornly refused to give up his claims or recognize the new Swedish government. This persistence involved Poland in a number of unfavorable wars with Sweden. Duke Karl was named Karl IX in 1600 . made king by Sweden and crowned in 1607. 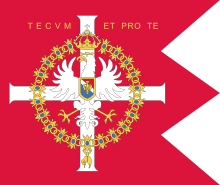 In 1602 Sigismund married Constanze of Austria , the sister of his late first wife. This event strengthened the influence of the Habsburgs at court and only depressed the Chancellor even more. During the Sejm of 1605, the king endeavored to reform the Polish constitution, according to which only a majority vote in the state parliament should be sufficient to accept a decision instead of the necessary unanimity . This most simple and useful reform was prevented by Zamoyski's resistance. His death that same year made matters worse as the opposition was now in the hands of incompetent or even criminal men. From 1606 to 1610 Poland was practically anarchy. Riots and revolts flared everywhere, and all Sigismund could do was limit the damage through his mediation and courage.

This mess had disastrous consequences for foreign policy. The impending collapse of tsarist Russia during the so-called Smuta would have given Poland the unique opportunity to eliminate the Russian tsars forever. But the necessary supplies did not materialize, because the state parliament remained undecided and blocked in the face of the triumphs of Żółkiewski and other generals who carried out large tasks with tiny armies. When the Thirty Years' War broke out , Sigismund wisely joined the emperor to balance the combined efforts of the Protestants and Turks. This tactic was beneficial to the Catholic cause as it kept the Turks out of central and northeastern Europe; Nevertheless, the decision for Poland would have meant ruin had it not been for the sacrifice of Stanisław Żółkiewski at Cecora in 1620 and Jan Karol Chodkiewicz at Chotyn in 1621 during the Ottoman-Polish War 1620–1621 . 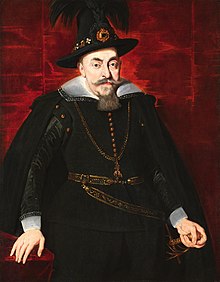 Sigismund died suddenly and unexpectedly at the age of 66. The king's remains were interred in the Wawel Cathedral in Krakow , where his sarcophagus is in the crypt under the Vasa Chapel . His sons Władysław and Johann Kasimir succeeded him on the throne.

King Sigismund was a talented painter and goldsmith . Only three of his paintings have survived to this day, one of which was attributed to Tintoretto for centuries . Most of the famous silver coffin of Saint Adalbert in Gnesen Cathedral comes from Sigismund's goldsmith's workshop .