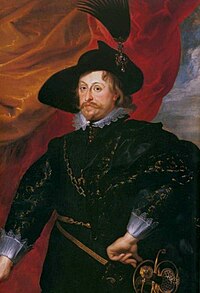 Władysław IV. Wasa ( Polish Władysław IV Waza , Lithuanian Vladislovas II Vaza , German spelling often Wladislaw IV. Wasa; born  June 9, 1595 in Krakow ; † May 20, 1648 in Merecz ) was from 1632, as elected King of Poland and Grand Duke of Lithuania , the ruler of Poland-Lithuania and titular king of Sweden . He was elected Tsar of Russia from 1610 and after being ousted by Michael Romanov from 1613 to 1634 titular Tsar of Russia.

Władysław came from the Wasa dynasty and was also a member of the Order of the Golden Fleece .

Władysław was the son of King Sigismund III. Wasa and the Archduchess Anna of Austria-Styria . He was a proponent of fighting, while drawing from the pacifist set needle removed. He laid claim to the Swedish and Russian crowns and tried to enforce them by force of arms.

Claim to the tsar's crown 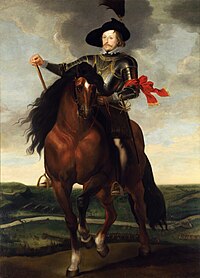 Władysław pushed forward in the autumn of 1617, during the Polish – Russian War 1609–1618 , on the Russian capital Moscow , where he was supported by associations of the Zaporozhian Cossacks . Since Russia wanted to avoid another siege of Moscow, after tough negotiations the Deulino Treaty was concluded in 1618 , which brought peace for 14 ½ years and the de facto recognition of the reign of Michael I Romanov.

Immediately after this period, his father died in 1632, Władysław was elected king and fought within two years, during the Russo-Polish War 1632–1634 for Smolensk , in a superior position from which he succeeded in 1634 Sign the Eternal Peace of Polanów with Moscow and leave Smolensk. The evening before the signing, a secret article was signed by Russian envoys allegedly obliging Moscow to pay 20,000 rubles to Poland for the cession of the city of Serpeysk. In reality, however, this was about the renunciation of the Tsar title by Władysław.

Entitlement to the Swedish krona

Władysław was Hereditary King ( arvkonung ) of Sweden. His claims to the Swedish throne were often reasons for disputes and wars between Poland and Sweden. This brought Poland enormous economic losses, especially when the Swedes took over some coastal cities during the Swedish-Polish War 1600–1629 . To consolidate power in the Baltic States , he built a fleet . As a participant in the Ottoman-Polish War 1620–1621 , the king had planned another war against the Ottoman Empire , which, however, met with determined resistance from the nobility.

1641 he confirmed as the last king of Poland the Brandenburg Elector Friedrich Wilhelm I , the feudal manor in the Duchy of Prussia .

During the reign of Władysław, the situation in Ukraine deteriorated . The magnates piled their fortune there and suppressed the Cossack people . From time to time there were uprisings by the Cossacks, which were fought very hard. Growing discontent led to the great Cossack and peasant uprising in 1648, led by Bohdan Chmielnicki in alliance with the Crimean Khanate , which inflicted many losses on the Polish knighthood. A few days after the uprising, King Wladyslaw died. The king's remains were buried in the Wawel Cathedral in Krakow .

In his first marriage he was married to his cousin, Archduchess Cäcilia Renata , daughter of Emperor Ferdinand II . It was a very unhappy marriage: two children died in childhood. Immediately after the third birth, a stillbirth, Cecilia also died.

In the political life of King Władysław, his second wife, Queen Marie Luise von Nevers-Gonzaga , played a major role, who ensured the good relationship with France and campaigned for the election of Vivente Rege (the choice of the successor during the ruler's lifetime). After his death she married his half-brother Johann II Casimir .