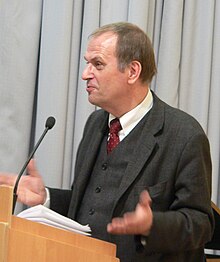 As the youngest of three children of the Protestant pastor Franz Höppner, Reinhard Höppner grew up in Magdeburgerforth and Prösen . As a pupil he took part in the International Mathematical Olympiads in 1966 and 1967 and received a silver and gold medal there. After graduating from high school in Elsterwerda in 1967 , he studied mathematics at the TU Dresden and graduated in 1971 with a degree in mathematics. In 1976 he received his doctorate externally at the same university with a doctoral thesis on the subject of "Fixed point statements for extended Submarkoff operators ". rer. nat. He was denied access to an academic career due to his activities in the Evangelical Student Community of Dresden.

From 1971 to 1989, Höppner was a lecturer and department head for mathematics literature at the Berlin Akademie-Verlag . Since 1980 he has held leading positions in the area of ​​the Evangelical Church of the ecclesiastical province of Saxony and from 1994 at the German Evangelical Church Congress and from 1990 to 2006 as a politician in various offices. Since 2006 he has mainly devoted himself to his voluntary work and his journalistic activities.

Reinhard Höppner was married to Renate Höppner, the Protestant pastor in the Kreuzgemeinde in Magdeburg , and the father of three children. He died on the night of June 9, 2014 after a long and serious illness of the consequences of cancer and was honored on June 14, 2014 in a memorial service in Magdeburg Cathedral with the participation of church and political figures.

People's Chamber of the GDR

Reinhard Höppner (left) in September 1990 at an election campaign event in Leipzig with Oskar Lafontaine (center) and Anke Fuchs (right).

In the state elections in 1994 , Höppner ran for the second time as the top candidate of the SPD after 1990. In these elections, the SPD was able to achieve significant gains and achieved 34.0 percent of the valid second votes, only 0.4 percentage points less than the CDU . Since the FDP had left the state parliament with 3.6 percent (-9.9 percentage points), there was no longer a governing majority for the previous Prime Minister Christoph Bergner (CDU). Instead, the SPD and Bündnis 90 / Die Grünen formed a minority government . On July 21, 1994, Reinhard Höppner was elected Prime Minister by the state parliament in the third ballot. The model known as the Magdeburg model of a minority government introduced for the first time at the state level, which was dependent on tolerance by the PDS , was discussed controversially nationwide.

In the 1998 state elections , the SPD was able to increase its share of the vote to 35.9 percent, while the CDU suffered significant losses (22 percent). Since the previous coalition partner Bündnis 90 / Die Grünen failed to enter the state parliament, the minority government of the SPD was continued as sole government with Reinhard Höppner as prime minister.

In the state elections in 2002 the SPD lost almost 16 percentage points, while the CDU gained almost as much. The SPD top candidate Höppner took responsibility for the election defeat and announced his departure from top political positions. He remained a member of the state parliament until the next state election in 2006 and devoted himself mainly to his journalistic and church tasks.

Church in the GDR 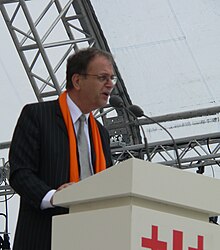 Höppner's various other activities included his participation in the advisory board to promote, support and accompany the project “ Bible in Just Language ”. He was a member of the board of the Evangelical Academy of Saxony-Anhalt , a member of the board of trustees of the Wittenberg Center for Global Ethics , deputy chairman of the Martin Niemöller Foundation and, from 2003, chairman of the Adam von Trott Foundation, Imshausen e. V. “, owner of a meeting place for dialogue and reflection in the former property of the resistance fighter Adam von Trott zu Solz in Bebra - Imshausen .

From 1996 on, Höppner was a member of the “ New Wednesday Society ” initiated by Marion Countess Dönhoff and Richard von Weizsäcker .

In recognition of his achievements in communicating science, politics, culture and religion, Reinhard Höppner received an honorary doctorate from the University of Paderborn in 2009 . Höppner was awarded the Federal Cross of Merit on ribbon .