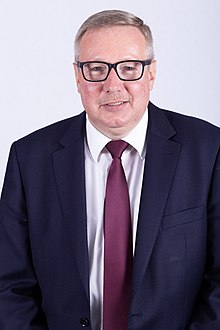 After attending elementary school , Steppuhn completed an apprenticeship as a reinforced concrete worker from 1977 to 1980 and then did military service from 1981 to 1982 . He then worked for a construction company in Minden in his learned profession until 1987 and then trained as an organizational secretary at the DGB .

In 1989 he became youth secretary for the DGB regional district of Lower Saxony / Bremen and in 1990 organizational secretary for the DGB district of Minden-Lübbecke . In 1990 he switched to the national executive committee of IG Bau-Steine-Erden in Berlin as a specialist . From 1991 to 2001 Steppuhn was state chairman of IG BAU in Saxony-Anhalt .

In 1980 Steppuhn joined the SPD. From 1999 to 2017 he was state chairman of the SPD working group for employee issues (AfA) in Saxony-Anhalt and from 2000 to 2011 he was chairman of the AfA federal committee.

Steppuhn is a member of the parliamentary left .

From 2005 to 2009 Steppuhn was a member of the German Bundestag . In the 2005 Bundestag election he was directly elected member of the Harz constituency with 33.8% of the first votes .

Andreas Steppuhn failed in the 2009 federal election on September 27, 2009 in the Harz constituency (constituency 69) in the fight for the direct mandate with 20.3% of the first votes. Since he was only secured through position 6 on the state list of the SPD, he left the Bundestag.