DGB is a link to this article. See DGB (disambiguation) for other meanings .

The German Trade Union Confederation ( DGB ) is the largest umbrella organization of individual trade unions in Germany. It has eight member unions with around six million trade unionists in the Federal Republic of Germany . These cover all sectors and economic sectors. However, there are also trade unions that do not belong to the DGB (see List of trade unions in Germany ) . The board of directors of the DGB is based in Berlin .

The union has been committed to the principle of a single union from the start .

For its work, the DGB receives 12% from the membership fees of its trade unions and finances DGB legal protection from this .

Founding document of the German Federation of Trade Unions from 1949

Election touchstones of the DGB 1987 for the federal election

The first steps towards founding a unified trade union took place before the end of the Second World War . On March 18, 1945, unionists met in the city of Aachen , already liberated by US troops , to hold an inaugural congress. The DGB itself was founded on October 12, 1949 in Munich . At that time, the Federal Congress of Trade Unions passed the "Statute of the DGB", which has since been amended or revised several times. Accordingly, the DGB is an “association of trade unions” based in Berlin.

On May 14th and 15th, 2009, the DGB organized a "Capitalism Congress" in which it dealt with the current world economic crisis.

In 1978 the police union (GdP) joined the DGB as the 17th union. In 1989, the art union merged with IG Druck und Papier , reducing the number of members to 16 again. In 1996, the IG Bau-Steine-Erden and the horticulture, agriculture and forestry union merged to form the IG Bauen-Agrar-Umwelt (BAU), so that there were 15 members. In 1997, the IG mining and energy (IG BE), the IG chemistry, paper, ceramics (IG Chemie) and the leather trade union merged to form the IG mining, chemistry, energy (IG BCE), leaving 13 members. In 1998 and 2000, respectively, the wood and plastics union and the textile clothing union merged into IG Metall . Thus there were still eleven members, and in 2001 four member unions merged ( German Postal Union (DPG) , Public Services, Transport and Traffic (ÖTV) , Trade, Banks and Insurance (HBV) and IG Media – Printing and Paper, Journalism and Art (IG Media) ) of the DGB, including the German Employees' Union (DAG), which was not a member of the DGB , to form the new trade union ver.di. As a result, since March 2001 there have only been eight member trade unions in the DGB. On November 30, 2010, Transnet and the GDBA (which was not a member of the DGB) merged to form the Railway and Transport Union (EVG). The number of member unions thus remained constant.

After the number of members of the trade unions represented in the DGB jumped from almost 7.94 million to over 11.8 million after reunification in 1990, a continuous downward trend can be observed since 1991. At the end of 2018, the DGB had fewer than 6 million members (as of December 31, 2018). This is the lowest level since 1951. The DGB only had a membership of 6 million members or less in its initial phase, the early phase of the German “ economic miracle ” from 1950 to 1955. At that time, the number of members rose slowly from 5 after it was founded in 1949 .4 to 6.1 million.

The basic program adopted at the 5th Extraordinary Federal Congress from November 13th to 16th, 1996 in Dresden is entitled "Shaping the future" and is divided into the following chapters and sections:

1. Creating work and sharing work
2. Change in work
3. We want to shape the work of the future
4. Shape through legal protection and collective agreement
5. Expand participation and co-determination

1. Public services and quality of life belong together
2. Consolidate and renew the social security system through reforms

The action program adopted on March 5, 1997 is entitled "For work and social justice" and is divided into the following chapters and sections:

The 18th Ordinary Federal Congress of the DGB took place from May 22nd to 26th, 2006 in Berlin. He chose

The congress passed 137 motions on the DGB statutes as well as on social and trade union policy issues, including the "leading motion 1" of the federal executive board "Human dignity is our benchmark". It says, among other things:

“Human dignity is inextricably linked to the individual's ability to participate in social and economic life as an independent individual. Without social justice, however, there is neither freedom nor dignity. However, dignity and freedom are no longer self-evident goods in our society. They are threatened by increasing economic deregulation and flexibility.
The openness of the markets and the speed of transaction processes allow international corporations and financial institutions to make decisions free from democratic control that have serious consequences for national economies, individual companies and employees. This worldwide unleashing of markets puts enormous competitive pressure on the welfare states and thus on their social standards.
...
Social justice as a prerequisite for a life in dignity and as the guiding principle of a welfare state democracy means, now and in the future,
The German trade unions stand up for this comprehensive idea of ​​justice.”

Chair of the DGB

Headquarters of the DGB in Berlin 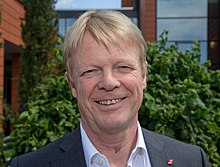 All chairmen were or are members of the SPD .

Member unions of the DGB with their seats

Bodies of the DGB

The organs of the DGB are:

The highest body is the Federal Congress, which meets every four years. Between the federal congresses, the federal committee carries out the tasks.

The highest representative of the DGB is the chairman as head of a multi-headed "board". The executive federal board consists of Reiner Hoffmann (Chairman), Elke Hannack (Deputy Chairwoman), Anja Piel and Stefan Körzell . The Revision Committee consists of three members. Among other things, it monitors the cash management and the annual accounts of the federal government and reports on this to the federal congress or federal committee.

Districts of the DGB

The DGB is divided into nine districts and 59 regions.

The districts and regions are:

§ 11 of the DGB statutes contains the regulation on the districts and regions.

The DGB-Jugend is the youth organization of the DGB.

From 1950 to 2004, the monthly trade union magazines were the DGB's theoretical discussion organ. The DGB has been publishing the online magazine Gegenblende since December 14th . Gegenblende is the successor to the DGB debate blog “Diskurs”.

In addition, the trade union weekly newspaper Welt der Arbeit was published, which had to be discontinued in 1988. In addition to the fact that the circulation of all newspapers owned by the trade unions was naturally too low, in the early 1950s they turned down the one-off offer to buy the well-known daily newspaper Die Welt from the British occupying power for DM 400,000  - the bid then went to Axel Springer Verlag . 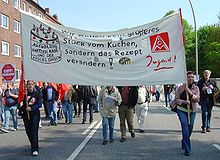 The IG Metallers form the largest group of DGB youth

From 1950, the DGB published the official magazine "Die Quelle", which was discontinued in 1997 and replaced by the newsletter einblick from 1998.

Standard publications on the DGB: