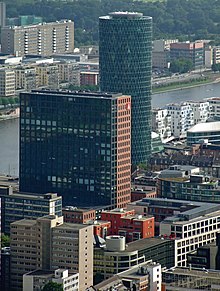 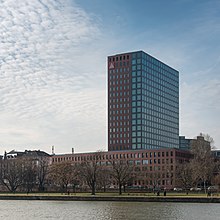 Administration from the main page

The IG Metall ( industrial union metal , IGM ) is with 2.26 million members before Verdi the largest single union in the Federal Republic of Germany and also the world's largest organized employee representation. After the membership figures declined in the 1990s and 2000s (IG Metall had 2.679 million members in 1990), it has increased slightly since 2011. Around 500,000 members of the mass organization are senior citizens.

IG Metall is based in the Main Forum in Frankfurt am Main and represents the employees of the metal / electrical, steel, textile / clothing, wood / plastics and information and communication technology industries organized in it. She has only represented the textile / clothing and wood / plastics sectors since 1998 and 2000, respectively, when the Textile Clothing Union (GTB) and the Wood and Plastics Union (GHK) joined IG Metall.

IG Metall primarily represents the workers in the leading sector of the German economy, the metal and electrical industry, which with 3.64 million employees is the most important industrial sector, from which around 60% of all exports of the German economy originate (2011).

Their social and collective bargaining initiatives shaped the German social constitution, such as the enforcement of continued wages in the event of illness through a three-month labor dispute in Schleswig-Holstein , the labor disputes to enforce the 40-hour week under the motto "Saturday is my father's" in the 1960s , the six-week annual vacation (strike in the steel industry 1978/79) and the 35-hour week in the 1980s.

Numerous IG Metall executives are active in the supervisory boards of large corporations in addition to their work in the union. Most of their supervisory board remuneration goes to the Hans Böckler Foundation .

The first workers' associations were founded in Germany before 1878, which Otto von Bismarck tried to prevent by means of the socialist laws until the 1890s . After it was abolished in 1890, the General Commission of the German Trade Unions was founded and one year later the German Metalworkers' Association (DMV), the most important predecessor organization of IG Metall. The DMV quickly developed into the largest German single trade union in the German Empire and in the Weimar Republic . The first congress of the trade unions in Germany took place as early as 1892. Up until the beginning of the First World War in 1914, there were repeated large strikes of miners, metalworkers and shipyards. After the end of the war, the General German Trade Union Federation was founded in 1919 and freedom of association was anchored in the Weimar Constitution . In the same year collective agreements became legally binding for the first time. In the years that followed, various laws such as the Works Council Act of 1920 or the Unemployment Insurance Act of 1927 strengthened the role of the trade unions and thus also of the DMV.

In 1928, the DMV had a head office built on Kreuzberger Lindenstrasse in Berlin by the well-known architect Erich Mendelsohn . The union was broken up in 1933 by the National Socialists , who banned all free unions. In the years that followed, up to 1945, many former union members suffered repression up to and including execution.

In the post-war years, many trade unions in West Germany were re-established according to the principle of the unified trade union , IG Metall in 1949. In the same year, the founding congress of the DGB took place and the collective bargaining law was passed. As before in the constitution of the Weimar Republic, freedom of association was enshrined in the newly created Basic Law for the Federal Republic of Germany .

In 1951 the Codetermination Act was introduced , and in 1952 the Works Constitution Act was introduced. For the first time there was a collectively agreed special payment ( Christmas bonus ) in 1954 . In 1952, the Federal Labor Court banned the introduction of wage groups for women. In 1956/57 a strike over sick pay was called. The five-day week was first implemented in hard coal mining in 1959 . Eight years after its introduction, collectively agreed vacation pay , the 14th salary, was paid for the first time in 1962 . In 1963, the largest strike of 350,000 trade unionists took place in Baden-Württemberg. 5% more wages and 41 ¼ hours a week. The 40-hour week was introduced in the metal industry in 1967 (two years after the printing industry) . In 1970 the law on sick pay was passed.

According to the former DGB member Kurt Hirche, the assets of IG Metall amounted to around 631 million DM in 1972 .

The Works Constitution Act was amended in 1972. The stone cooler break of five minutes an hour was introduced in 1973 for assembly line workers in the Baden-Württemberg tariff area and partially adopted in other areas. From 1975 onwards, rationalization and income protection became the focus. In 1978 there was a strike around the 35-hour week in the steel industry . There was a strike in the metal industry in 1984. The 35-hour week has not (yet) been implemented. In 1990, West German collective bargaining structures were transferred to East Germany in stages .

The East and West German trade unions were united in 1991. The 35-hour week was implemented in the metal industry in 1995. In the same year there was the first attempt at an alliance for work . The full continued payment in the event of illness is guaranteed. The Works Constitution Act was reformed in 2001. When the collective bargaining was concluded in 2002, the Framework Agreement on Pay (ERA) was also concluded. In East Germany, strikes to introduce the 35-hour week largely failed, resulting in a leadership crisis in IG Metall. After long disputes, it was decided for the first time for the two Siemens plants in Kamp-Lintfort and Bocholt to return from the 35 to the 40-hour week. In 2011 IG-Metall supported the energy transition.

In the next few years up to 2020, IG Metall will no longer seek agreements on a collective reduction in working hours as it did in the 1980s; Instead, individually tailored working time models are to be negotiated with options for reducing working hours for care and support tasks, qualifications and flexible age transitions.

The IG Metall's articles of association specify in particular: 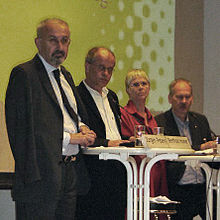 Jürgen Peters next to Huber, Rölke and Röder

All previous chairmen of IG Metall were or are members of the SPD . It has a certain tradition that the second chairman succeeds the first. Only Alois Wöhrle in 1969 and Karl-Heinz Janzen in 1992 retired without moving up as first chairman, while Walter Riester became Federal Minister of Labor in 1998 and therefore left.

Supervisory board mandates and transparency of duties

Trade unions in the German Federation of Trade Unions