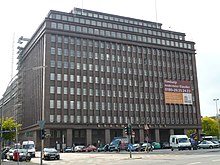 The German Employees' Union ( DAG ) was an independent union based in Hamburg . It did not belong to the German Trade Union Federation (DGB) before it became part of the United Services Union (ver.di) in 2001 .

The German employee union was founded in 1949 by the union of five employee associations in the three western zones in Stuttgart- Bad Cannstatt, initially with 215,000, 343,500 (1951) members.

The first employee associations were registered as early as the middle of the 19th century. In the Weimar Republic, three ideologically orientated employee unions emerged from the nearly one hundred different employee professional associations: the social-democratically oriented AfA-Bund , the liberal union federation of white-collar workers and the Christian national association of the German employee unions . The DAG saw itself as the union's successor organization to the employee associations that existed until it was broken up by the National Socialists in 1933.

The DAG established itself as a professionally oriented, politically independent union for white-collar workers. It did not belong to the DGB and was an independent political organization. In this function, she worked to safeguard the interests of its members in parliament and government. Among other things, it achieved the restoration of self-administration for those insured in the social security system and a largely independent social security system for employees in the 1950s. In the following decades it had a lasting influence on collective bargaining policy for white-collar workers. She also set particular accents in women's politics by emphasizing partnership and women-specific aspects. At many levels, she pursued professional policy for the qualification of employees. The DAG with its educational institutions - German Employees Academy (DAA) and Bildungswerk der DAG - became one of the largest educational institutions for the qualification of employees in the Federal Republic of Germany. B. In the early 1990s, more than 100,000 people were given vocational training and further education every year.

The strict separation of full-time and voluntary functions has become a particularly important feature of the DAG. Originally, the DAG main board consisted of full-time and honorary workers. At the federal congress in 1957, the delegates decided to split into the full-time federal executive board and the voluntary union council. The DAG publications for members were "Der Anarbeiter", "Jugendpost" and "Standpunkt".

On December 31, 1989, the DAG had 503,528 members (around a third of them female) who came together in various professional groups and regional associations. The former head office of the DAG was in today's Brahms Kontor .

In 2001 the DAG merged with four DGB unions (DPG, HBV, ÖTV, IG Medien) to form the United Service Union ( ver.di ), which at the time of the merger and integration comprised almost 2.9 million members.

Chair of the DAG