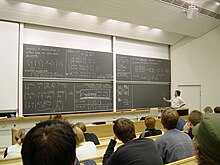 Lecture in mathematics at Helsinki University of Technology

Most of the time, courses of study outside of the universities are also referred to as studies, especially training and further education in the tertiary education sector at vocational or specialist academies . To study at universities, prior matriculation (enrollment) is required, which is linked to certain requirements.

Colloquially, the term study is now also used for training courses at technical schools , vocational schools or at correspondence schools , administrative and business academies and other educational institutions in the Quaternary education sector.

A course of study consists of attending lectures , supplemented by exercises (in some cases also field exercises ), tutorials , seminars , revision courses , colloquia , internships and self-study . The knowledge acquired is queried either in partial examinations during the semester or in final examinations through written exams or oral exams . As a rule, a scientific thesis concludes the course.

Since the start of the standardization of European higher education as part of the Bologna Process (since 1999), a distinction has also been made in Germany between undergraduate studies ( Bachelor , Diplom , Magister , first state examination , licentiate , Baccalaureus / Bachelor) and postgraduate studies based on this ( Master ). A doctorate can be built on the latter . A special feature in Germany is the dual course of study , in which extensive practical components are woven into the university course and are completed in companies.

Universities have existed in the United States since the 17th century. The oldest is Harvard University , which dates back to 1636. In 2017 there were 4,298 universities in the USA, including 2,672 private universities. 14.56 million students were enrolled here. The proportion of students in the USA is very high. In 2018, 59.7% of all young people in the “Class of 2018” (including school dropouts) started studying.

The universities offer courses with up to four different degrees: Associate, Bachelor, Master and Doctoral. A distinctive feature of tertiary education in the United States is the extremely high tuition fees.

Australia has 43 universities as well as other colleges and technical schools. The prerequisite for studying is at least a school leaving certificate from high school, a Certificate III or Certificate IV. A distinction is made between 6 different academic courses: bachelor's degree, master's degree, graduate certificate and graduate diploma, bachelor's degree honor and doctoral degree. The bachelor's and master’s degree programs correspond in terms of duration, sequence and scope to the corresponding degree programs in Germany. The Graduate Certificate and Graduate Diploma are postgraduate courses that last 6 to 12 months and can be attended as a supplement to an already completed course. Doctoral programs in Australia can only be undertaken at universities and typically last 3–4 years.

As in the United States, tuition fees are extremely high in Australia. Depending on the degree program, fees can also exceed the $ 100,000 mark.