The title of this article is ambiguous. Further meanings are listed under flower (disambiguation) .

Flowers with butterfly and bee 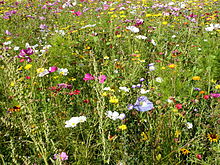 A meadow of flowers

A flower (from Old High German bluoma , from Indo-European bhlô , “to bloom, to appear”) describes in everyday language either a flowering plant that “produces” larger, eye-catching flowers , or a “single flower of a flower with a stem” or becomes used as a short form for flower stick. It is often used as jewelry, e.g. B. as a cut flower in a bouquet , as a flower wreath or flower arrangement. In the fine arts , flowers as a floral motif are a common theme.

Definition in botany and differentiation from flowering 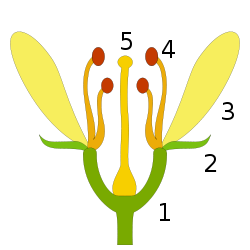 A flower is the pollination-biological unit of the flowering plants . It is their job to attract pollinators, or they form a technical-functional unit. So flower is an ecologically- functionally defined term. Flowers pollinated by animals are classified according to their pollinators, such as bird flowers or beetle flowers .

A flower is defined as a sprout of limited growth in the service of sexual reproduction . Their structure is clearly divided into the flower envelope , stamens and carpels . Tulips or rose blossoms are good examples of this. They do not have to be conspicuously built or colored; and grasses have flowers.

Relationship between blossom and flower

Different types of flowers are distinguished according to the shape of the flowers. The flower type is closely related to the respective pollinator:

In accordance with the adaptation to the pollinators, the flowers form characteristic syndromes, which are called flower styles. They are discussed in more detail under the individual forms of pollination . Examples are bird flowers , bee flowers .