The titan arum or titan arum ( Amorphophallus titanum , Latin literally for "misshapen giant penis") is a species of plant native to Sumatra that belongs to the arum family (Araceae). It produces the largest unbranched inflorescence in the plant kingdom. The flower, which is up to three meters high, exudes a carrion odor that is adapted to the jungle and thus attracts beetles from the short-winged families (Staphylinidae) and carrion beetles (Silphidae), which ensure their pollination .

The leaves of the titan arum are reminiscent of a small tree with an umbrella-shaped crown.

The titan arum is a perennial herbaceous plant that is one of the world's largest flowers and one of the so-called kettle trap flowers . It is not known what age she can reach. The plant consists of a tuber as a persistence organ, which forms a single leaf at regular intervals and forms an inflorescence when there is no leaves . As long as she has the leaf - it remains in place for 12 to 20 months - nutrients are built up and stored in the tuber. The tuber thereby significantly increases in mass. For example, a specimen that bloomed in the Botanical Garden of Basel at Easter 2011 had increased the tuber mass from 8 to 24.5 kg in the preceding 15-month vegetation phase. A vegetation phase is followed by a resting phase in which the leaf dies and the roots of the tuber also wither. A vegetation phase then follows. In order for the flowering stage to be reached, the tuber must weigh at least 20 kg. In 2014 the tuber weighed 45 kg in Basel.

The only large fallen leaf is divided into petiole and leaf blade and recalls in its shape to a small tree with umbrella-shaped crown. To predators to be misleading, the long petiole has white spots that a lichen pretend like he is also to be found on the bark of forest trees. The leaf blade is divided several times.

Indonesian common names for this species are bunga suweg raksasa or generally bunga bangkai (carrion, corpse flower); it only occurs in Sumatra . Many botanical gardens, such as in Bogor on Java , cultivate this type of plant, but the flowering event occurs only very irregularly every five to ten years.

In order to attract insects such as carrion beetles of the genus Diamesus and short-winged beetles of the genus Creophilus , the inflorescences give off a carrion odor that is unpleasant for humans . The animals crawl down into the spathe in order to lay their eggs there and thus ensure pollination . However, the larvae have to starve to death after hatching. A number of sulphurous compounds and amines are responsible for the bad smell of the flowering plant, including dimethyl disulphide , dimethyl trisulphide , putrescine and cadaverine .

Inflorescence of the titan arum in the Stuttgart Wilhelma (2005)

Titan arum with three inflorescences, May 14, 2006 in the Botanical Garden in Bonn 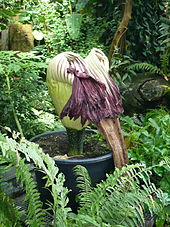 Amorphophallus titanum is one of the most spectacular phenomena in the plant world. It became known in the west through the Florentine botanist Odoardo Beccari , who in 1878 saw leaves and a fruiting plant on August 6th during an expedition in Atjer Mantior on Sumatra and a blooming specimen on September 5th. Beccari sent some tubers and seeds to Florence. The tubers perished, but a few seeds germinated, and some of these seedlings were sent to the Royal Botanic Gardens , Kew , London . There, in 1889, eleven years after its discovery, a plant specimen blossomed for the first time outside of its tropical home. As early as November 1878, the year it was discovered, Beccari announced his extraordinary find in the Gardeners Chronicle and named the plant Conophallus titanum . Giovanni Arcangeli gave it its current scientific name in 1879.

The record for the world's largest titanium arum inflorescence is held by the Cibodas Botanical Garden, Bogor , Indonesia , with a height of 3,734 meters in 2016.

In 2006, the Bonn Botanical Garden saw the first Titan Arum outside of its home, the Indonesian jungle , which produced three inflorescences at the same time. The tuber, weighing around 117 kg, had already produced a record-breaking inflorescence in 2003, after 2006 and 2009 it bloomed again in 2017.

In the Ecological-Botanical Garden of the University of Bayreuth , a particularly short period of time between blooming was observed. The same plant that bloomed at the beginning of August 2014 sprout again after less than a year, which opened on June 6, 2015. A second plant blossomed there on June 18, 2016. The same specimen bloomed in the palm garden of the city of Frankfurt in April and December 2018 without developing a leaf in between. Both inflorescences were over 2 m high.