This article covers mimesis in biology. On mimesis in the humanities, see Mimesis . 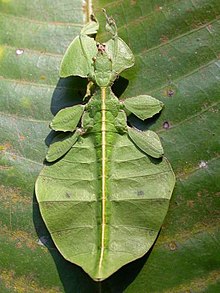 As Mimese (from ancient Greek μίμησις MIMESIS , German , imitation ' ) is in the Biology a form of camouflage referred to, wherein a subject in shape, color and attitude assumes a part of its habitat and no distinction as to optically aligned enemies of the environment can be. The mimicry is also known as camouflage or concealment and differs from the mimicry , which is a warning costume . In English usage, however, mimetics is often counted as mimicry.

According to the type of imitated objects, mimesis is divided:

This type of camouflage was already used 50 million years ago by small butterflies , which in the larval stage camouflaged their quiver with all kinds of objects from the forest floor. Examples are as inclusions ( inclusions preserved) in Baltic amber.