The title of this article is ambiguous. Further meanings are listed under Berggarten (disambiguation) .

The mountain garden in the Herrenhausen district of Hanover was created on the slope of an Ice Age sand dune and developed from a vegetable and nursery garden to a botanical garden . The rainforest house that was built here in 2000 was converted into an aquarium in 2006. Together with the Great Garden , the Georgengarten and the Welfengarten , it belongs to the Herrenhausen Gardens .

Library pavilion at the Berggarten

Bottle palm in the show house

The Berggarten is north of the Great Garden on the other side of Herrenhausen Street. It is one of the oldest botanical gardens in Germany.

The garden was laid out in 1666 by Duke Johann Friedrich as a kitchen garden for growing vegetables. The site was a sand mountain north of the Herrenhausen Castle .

In 1726/1727 the horticultural artist Ernst August Charbonnier created the avenue, which today is the driveway leading from Herrenhäuser Straße to the Welfen mausoleum and is the property of the Welfenhaus.

In 1750 the kitchen garden in Linden took over the supply of the farm with fruit and vegetables, the mountain garden has been a botanical garden since then.

Between 1817 and 1820 Georg Ludwig Friedrich Laves built a garden master's house, into which the garden library moved in 1952 and which thus became the library pavilion. The palm house built by Laves was opened in 1849, and five years later it housed the most valuable and extensive collection of palm trees in Europe.

From 1842 to 1847 work on the Guelph mausoleum according to plans by Laves lasted. King Ernst August and his wife Queen Friederike first found their final resting place here. In the meantime (1845 to 1846) the mountain garden was enclosed by walls and fences.

In 1880 Richard Auhagen built the large palm house to replace the previous greenhouse . It was a palatial greenhouse made of steel and glass about 30 meters high with galleries and water fountains.

After the greenhouses were destroyed in an air raid during the Second World War in 1944, the restoration of the Berggarten gradually began. In the 1950s the palm house was demolished.

In 2013, the discovery of the Russian beetle prevented many rotten linden trees from being felled on the avenue in the Berggarten.

In the show houses and themed gardens of the Berggarten there are currently 11,000 different plants from different climates, including the largest orchid collection in Europe.

Aquarium in the rainforest house

Entrance to the Sealife Center in the Berggarten 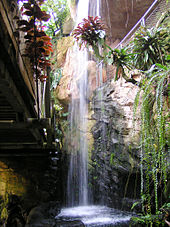 Waterfall in the rainforest house

Came to at the site of the former Palm House Expo 2000 , the Rainforest House . It housed an artificial tropical landscape in which butterflies, frogs and smaller bird species from tropical regions lived. The rainforest house was closed in 2006 because of excessive costs.

The house was out in a Sealife rebuilt -Aquarium, where the rain forest has been preserved. It is the first almost completely tropical sealife center. The deep sea basin holds 300,000 liters of water. A large ocean basin with sharks and turtles is four meters deep and can be observed by visitors through an eight meter long acrylic glass tunnel. 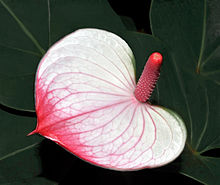 This orchid is a hybrid of Cymbidium insigne and Cymbidium tracyanum called Cymbidium "Doris" from the Berggarten.